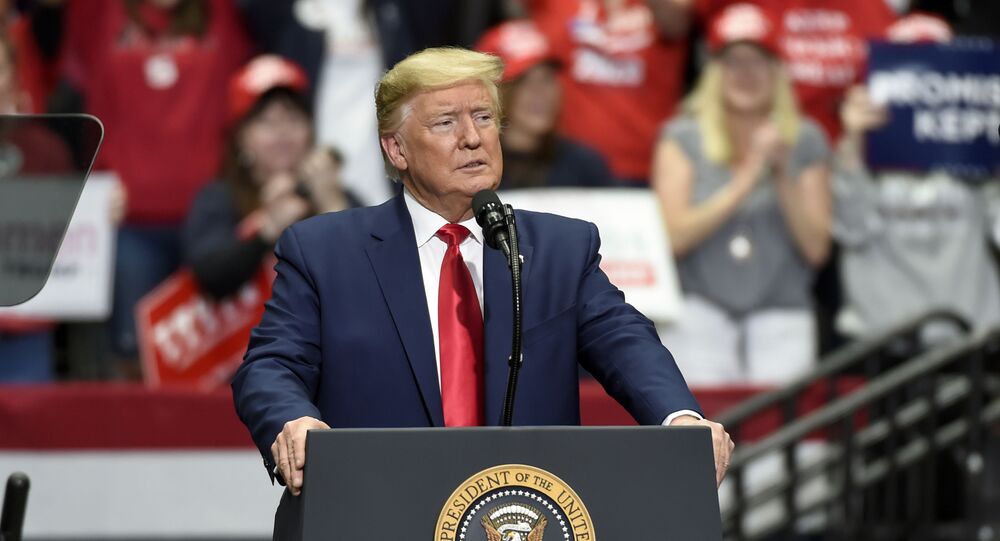 Speaking at his first public event since Super Tuesday, when people in 14 states went to the polls to cast their votes in the Democratic primaries, POTUS noted that “there is something going on” with the former top Obama administration official.

Donald Trump has sent jabs at Joe Biden’s cognitive abilities in the former vice president’s hometown, which may potentially set the tone for the upcoming presidential showdown.

Speaking at a town hall in Scranton, Pennsylvania, just a mile and a half from where Joe Biden grew up, POTUS remarked that there was “something going on” with the Democratic candidate, whom Super Tuesday's voting results rather unexpectedly propelled to the first spot in the ongoing Dem primary race.

Trump went on to note that he had been “all set” to face Biden’s rival, Bernie Sanders - a “communist”, as the president referred to the Vermont senator.

“Then we have this crazy thing that happened on Tuesday, which [Biden] thought was Thursday, but he also said 150 million people were killed with guns and that he was running for the United States Senate. There’s something going on there”, Trump recalled, referring to some of Biden’s recent gaffes.

The former VP did not immediately comment on Trump’s taunting remarks, while POTUS’ line of attack couldn’t go unnoticed in the state, where he won with a very slim margin in 2016 – by 48.2% compared with Hillary Clinton’s 47.5%.

Trump has in his turn also been caught multiple times making spelling mistakes on Twitter, with sharp-tongued critics going as far as questioning his mental abilities and thus his fitness for the top White House office.

Joe Biden, meanwhile, came first in his party’s primary elections in 10 out of 14 states on Super Tuesday, 3 March, thereby snatching the lead from self-described “democratic socialist” Bernie Sanders. The latter, however, grabbed the biggest prize of the day – California, which holds the most delegate seats (415.)