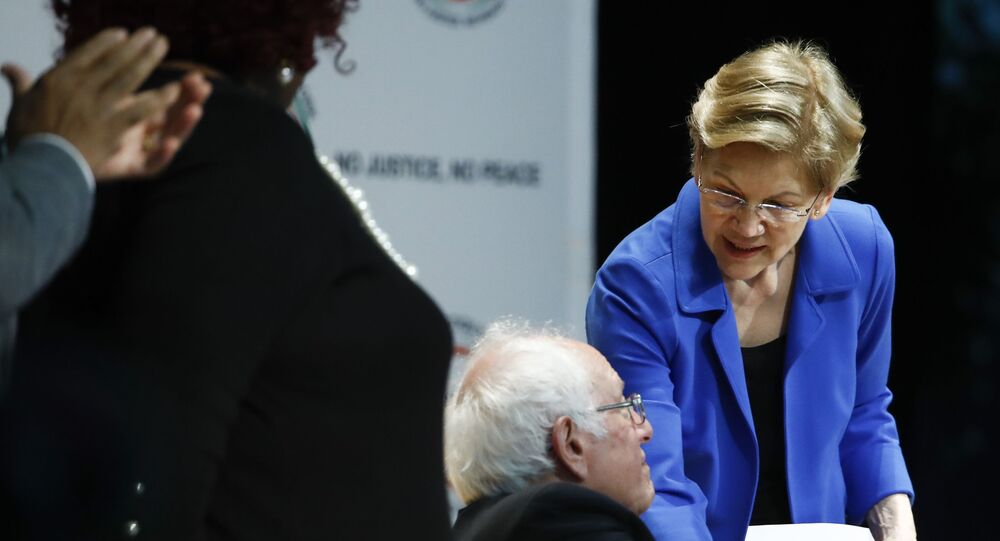 As the primary struggle has gradually boiled down to a two-candidate clash, Elizabeth Warren’s team is alleged to be discussing the prospects of joining efforts with political firebrand Bernie Sanders amid a certain pressure from liberal groups. Joe Biden’s campaign is purported to be looking to exploit Warren’s clout as well.

Democratic primary candidates’ – Sen. Elizabeth Warren’s and Sen. Bernie Sanders’ allies – are currently discussing ways for the two potential nominees to join efforts and push a common liberal agenda, amid expectations that Warren stands a solid chance of dropping out of the presidential race soon, The Washington Post reported citing two people familiar with the subject.

The debate is purportedly in the early stages and is mostly spearheaded by Sanders’ backers who are alleged to be trying to reach out to those in the Warren camp to discuss the prospect of Warren of Massachusetts, potentially endorsing the Vermont senator.

According to two insiders, they are also addressing Warren's supporters, urging them to throw their weight behind Sanders, as her associates as well as those of Sanders and former Vice President Joe Biden say that Warren is exploring options about how to best step aside in the wake of her unsuccessful performance on Super Tuesday.

As late as Tuesday, Warren allies reportedly believed she would continue the race until the Democratic convention, irrespective of her bleak results in the primaries to date. However, on Wednesday, Warren's campaign manager Roger Lau indicated that the senator was floating the idea of withdrawing:

"Last night, we fell well short of viability goals and projections, and we are disappointed in the results", he wrote to campaign staffers in a note seen by The Washington Post. "We are going to announce shortly that Elizabeth is talking to the team to assess the path forward".

Warren and Sanders are known to have held a phone conversation Wednesday, with Sanders telling reporters in Vermont that she “hasn’t made any decisions as of this point".

"It is important for all of us, certainly me, who has known Elizabeth Warren for many, many years, to respect the time and the space she needs to make a decision", “the Teflon candidate” said.

Warren, the only female candidate expected to qualify for the next Democratic debate slated for 15 March, has meanwhile been pressed by liberal activists and Sanders’ supporters to drop out of the race and not further divide the party’s liberal faction. One such voice was Rep. Ilhan Omar, a Sanders backer:

Left-leaning groups appear to have called for her to give up the effort, ever since her fourth place finish in New Hampshire:

“She should drop out of the race and endorse Bernie Sanders", said Matt Bruenig, founder of the People’s Policy Project, a liberal think tank.

Winning the backing of the Massachusetts senator would be a trump card for both Sanders and Biden alike. For Sanders it would guarantee that the liberal camp is unified, while for Biden, it would further strengthen his positions in the eyes of party leaders.

Despite Warren’s campaign having raised $29 million in February, compared to Biden's $18 million, Super Tuesday’s results didn’t live up to the candidate’s and her team’s expectations. She finished third in her home state of Massachusetts, and fourth in the state where she grew up – Oklahoma.

With Warren’s stand weakened and Mike Bloomberg departing the race, the primary has largely settled into a “two-man” battlefield. Per the preliminary results from Super Tuesday, which continue to be counted and double-checked, including in California, Biden leads the pack by a 566-501 delegate count, having knocked down the lead Bernie Sanders enjoyed after the first several primaries. In order to challenge Donald Trump in November, a candidate needs to rack up 1,991 delegates to grab the nomination.