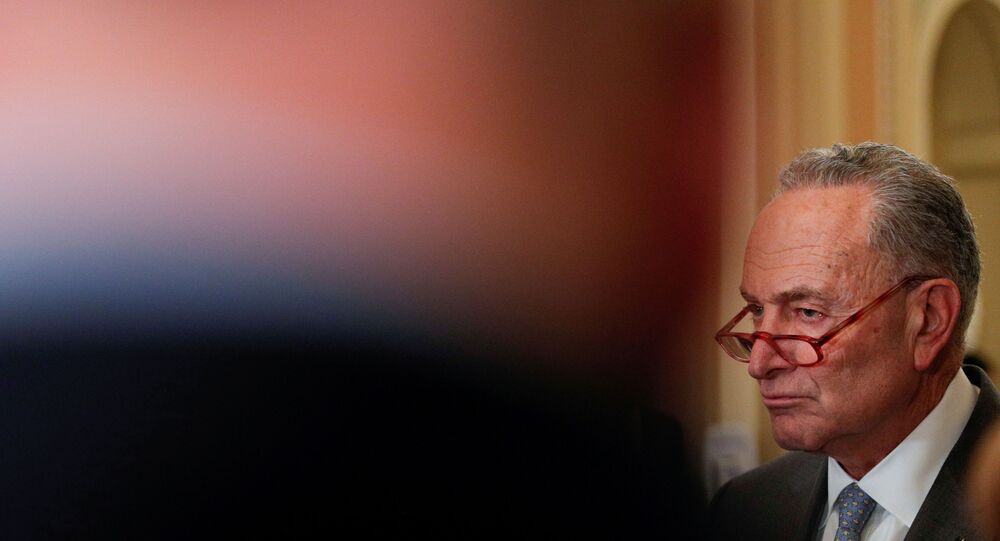 Video of Chuck Schumer lashing out at two justices with vague threats quickly went viral online, which many considered a direct threat toward the US Supreme Court.

US President Donald Trump has reacted to the recent threats made by Senate Minority Leader Chuck Schumer against two Trump justices, saying they are a "direct and dangerous threat to the US Supreme Court".

There can be few things worse in a civilized, law abiding nation, than a United States Senator openly, and for all to see and hear, threatening the Supreme Court or its Justices. This is what Chuck Schumer just did. He must pay a severe price for this!

This is a direct & dangerous threat to the U.S. Supreme Court by Schumer. If a Republican did this, he or she would be arrested, or impeached. Serious action MUST be taken NOW! https://t.co/WqQUbyzaJU

Schumer's comments have also not gone unnoticed by most high-profile US officials and media figures. US Chief Justice John Roberts called Schumer's threats "irresponsible" and "dangerous".

Vice President of Government Affairs Scott Parkinson also suggested that Schumer might have done grave damage to his career by making direct threats to the justices.

Possibly the biggest mistake of Schumer’s career in public office.

This is not a gaffe; Schumer meant to threaten Gorsuch & Kavanaugh.@senatemajldr should hold a vote in the Senate to censure Schumer. #SCOTUS pic.twitter.com/mbr7lebP7O

Others suggested that real action, including censure or even expulsion, should follow Schumer's recent threats.

Schumer should face censure/expulsion for his threats directed at Justices Gorsuch & Kavanaugh. Chief Roberts correctly called the threats “irresponsible” & “dangerous.” Schumer won’t be removed, of course, because 2/3rds majority is required. But censure takes only a majority.

I would call on Schumer to apologize, but we all know he has no shame. So tomorrow I will introduce a motion to censure Schumer for his pathetic attempt at intimidation of #SupremeCourt

Some have also called for Schumer to be impeached and then arrested for trying to influence the decisions of the US Supreme Court in order to back his own views and beliefs.

Chuck Schumer should be arrested. He tried to influence a Supreme Court case by making open threats against the justices. That’s definitely not legal. He should be charged and thrown out of office.

Schumer now lying about his threats against SCOTUS Justices, which were leveled because he believes abortion-on-demand should be fully unrestricted — not even safe for the mother...& certainly not rare.

“Country before party” they intone, badgering me to vote for these people.

At a pro-abortion rally, Schumer threatened two US justices, Neil Gorsuch and Brett Kavanaugh, claiming that they would "pay the price" while the court heard arguments in an abortion case.

Schumer did not elaborate on his claims, but his office told Fox News that he referred to the "political price" the Republicans would pay "for putting them on the court".

The case, June Medical Services LLC v. Russo, concerns a law that requires doctors in Louisiana that provide abortions to have admitting privileges in case of a patient having issues during or after the abortion procedure.