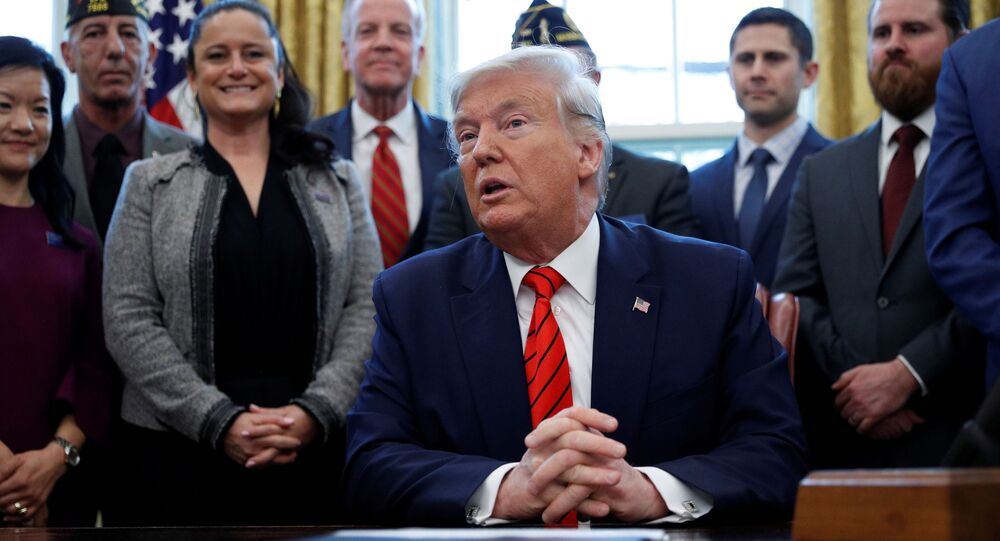 After he testified in the impeachment of US President Donald Trump, then-US national security adviser Alexander Vindman was fired and escorted out of the White House, his lawyer revealed. A twin brother, Yevgeny, who served as a senior lawyer on the National Security Council, was also removed.

US President Donald Trump has warned that NSC adviser Lieutenant Colonel Alexander Vindman, who has been fired by the White House fired after testifying against him in the impeachment trial, could face disciplinary action from the military.

Several days after he and twin brother Yevgeny Vindman, who served as a senior NSC lawyer, were removed - although the latter did not testify in the hearings - Trump accused Alexander Vindman of reporting “very inaccurate things” concerning what the president charcterized as a “perfect” telephone conversation with Ukrainian President Volodymyr Zelensky.

“It turned out that what he reported was very different. And also when you look at the person he reports to, said horrible things, avoided the chain of command, leaked, did a lot of bad things. And so we sent him on his way to a much different location, and the military can handle him anyway they want,” Trump told journalists at the White House, while signing a veterans bill.

Asked a follow-up question about what he meant by “the military can handle him,” Trump detailed what an official who has been fired by the White House could expect.

“That’s going to be up to the military, we’ll have to see, but if you look at what happened, they’re going to certainly, I would imagine, take a look at that,” he remarked.

Vindman's lawyer, David Pressman, claimed that his client was escorted from the White House in a clear move of political retribution.

"There is no question in the mind of any American why this man’s job is over, why this country now has one less soldier serving it at the White House," Pressman said, in a statement shared with reporters.

The news about the firing came shortly after Trump, preparing to board Marine One, told reporters that he was "not happy with [Vindman]," and that he was going to leave it up to White House officials to decide on whether the military offcier would depart the administration.

As an Army spokesperson later stated, however, the Vindman twins were reassigned to the Department of the Army, while White House senior adviser Kellyanne Conway said that the two "just got relocated" while hinting at further personnel decisions. At the same time, US Army Secretary Ryan McCarthy told Cheddar that the fired NSC aide was to return to the Army in May, after finishing his assignment at the White House. According to the military official, however, Vindman will be sent now.

"So, he's coming back a couple months early, and he's going to be at the headquarters Department of the Army, and then we'll send him off to War College this summer. All these detailees come back and forth pretty regularly, so it's just a few months early, and we'll get him back into the force," McCarthy said.

© REUTERS / Leah Millis
Riding Impeachment Acquittal Wave, Trump’s 2021 Budget Renews Offensive on Working Class
Vindman’s firing came a couple days after a Republican-majority US Senate voted 52-48 to acquit Trump on impeachment charges for abuse of power and obstruction to Congress. The impeachment proceedings were started by Democrats in the House of Representatives over claims that he had made efforts to enlist Ukraine’s help in investigating allegations of corrupt business practices by his 2020 presidential rival Joe Biden's son Hunter in exchange for military aid to Kiev.
...
Reddit
Google+
Blogger
Pinterest
StumbleUpon
Telegram
WhatsApp
83
Tags:
impeachment, US National Security Council, Donald Trump, US
Community standardsDiscussion
Comment via SputnikComment via Facebook