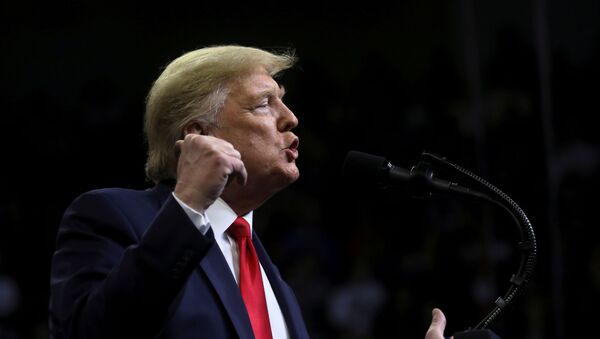 US President Donald Trump on Monday proposed a $4.8 trillion dollar federal budget for next year that includes big cuts to social safety net programs - yet another reflection of his agenda to transfer wealth from the poor to the rich, civil rights attorney Julie Hurwitz told Sputnik Monday.

Trump proposes increasing military spending by 0.3% to $740.5 billion for fiscal year 2021 and cutting non-defense programs by 5%, to $580 billion. The plan also proposes $4.6 trillion in deficit reductions and a $4.4 trillion cut in domestic spending over the next decade.

Among the $4.4 trillion in cuts are $2 million taken from mandatory spending programs and $292 billion from safety net cuts, including the establishment of “work requirements for Medicaid and food stamps,” the Wall Street Journal reported. Another $70 billion in spending reductions would come from “tightening access to disability benefits.” The budget further proposes reducing the Environmental Protection Agency’s budget by 26.5% and the Health and Human Services Department’s budget by 9%. Foreign aid would also be cut by 21%.

“It’s just another example of his priorities and his agenda to just maintain wealth transference from the poor to the rich and to maintain and increase the power of the 1% and its wealth,” Hurwitz told Loud & Clear host Brian Becker. “He promised tax cuts for the poor, tax hikes for the rich. He promised no cuts in social service spending, and of course, all of those were lies and continue to be.”

“I started to make a list of all the massive cuts to the safety net and to the social services programs that are currently in place,” Hurwitz said. “I can't even keep track of all these massive hits he is proposing. We do see some evidence in the House of a little bit of a spine growing on the heels of [Democrats’] effort to rightfully impeach this man, but ... with the groundswell of what he is claiming to be an increase in support among his base as a result of the failure to convict him after being impeached, you know, he is just riding this wave.”

The Democratic presidential primary race saw its first ballots cast in Iowa last Tuesday, with Vermont Senator Bernie Sanders winning the popular vote. As an anti-establishment candidate, Sanders’ vision for the US - which involves paid maternity leave, universal healthcare, free college tuition and a hike in the minimum wage - is in stark contrast to Trump’s.

However, the corporate media continues to demonize Sanders for his advocacy for democratic socialism, Hurwitz pointed out.

“It’s not just his competitors, his opponents in the Democratic Party, who were smashing him,” Hurwitz said of Sanders. “If you read any mass media outlet, the New York Times, the whole psychological method of language that they are using to not only attack him, but even when they have to acknowledge that he is winning, they are subliminally discounting him, disregarding him and discrediting him.”

“It’s just another example of how liberalism is bankrupt in the country and how the Democratic Party continues to shoot itself in the foot and the head and the heart,” the attorney told Sputnik. “It’s a trajectory that we’ve been on really for decades.”

“Historically, I think there has been a much different kind of discourse in the US than in other parts of the Western, capitalist world. And so, we are just now in this country beginning to understand that the word ‘socialism’ is not as scary as we have been led to believe, although it’s taking a while to catch on, and Trump is capitalizing on the assault, on being able to use these trigger words to scare the bejeebers out of voters and to give ammunition to constituents,” she said.

“The only hope we have, I believe, is for those folks who didn’t vote and who don’t believe in the system to recognize the danger that we’re under and [at a] minimum, go out there and stomp the streets and get people into the voting booths to vote for Bernie Sanders,” Hurwitz explained.