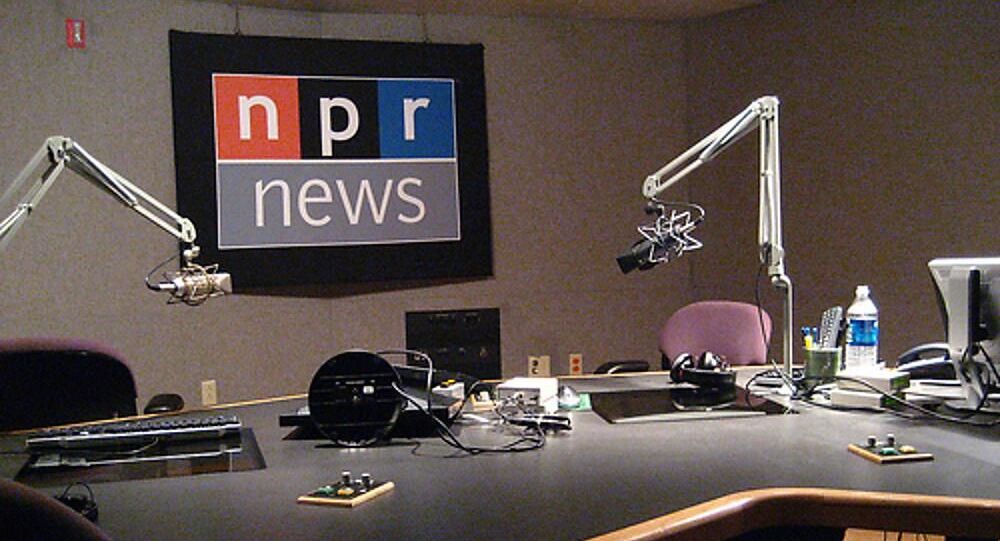 On Wednesday, a National Public Radio reporter sought an interview with a Sputnik News journalist for an upcoming story. However, when Sputnik's Washington, DC, bureau chief agreed on the condition they be recorded for clarity, the NPR writer suddenly refused. Why is NPR afraid of going on record?

Chris Haxel, an NPR reporter from the organization’s Kansas City, Missouri, partner station KCUR, reached out to Sputnik on Wednesday to interview DC Bureau Chief Mindia Gavasheli for an upcoming story. Haxel previously authored a January 25 article about Kansas City radio station KCXL agreeing to broadcast two three-hour increments of Radio Sputnik on 1140 AM, 102.9 FM and 104.7 FM in the morning and evening that was full of third-party insinuations but light on actual information about Sputnik’s content hitting Missouri airwaves.

Gavasheli readily agreed to the interview, but insisted he be allowed to record and potentially broadcast their conversation on Radio Sputnik in the interests of public accountability. At this point, Haxel quickly shied away from the suggestion, insisting he was “not authorized to talk” on the record for his station.

It’s an odd retort: if anything, it’s Gavasheli who is bereft of “authorization,” Haxel having called him just then for the interview. One would presume the NPR journo was the one with authorization, given that he’s writing the story for his outlet!

It isn’t like Gavasheli requires Vladimir Putin’s personal permission and guidance before speaking freely on the record. The deep irony here is that while it was the scary Kremlin puppets who were willing to do so, it is that venerable fountain of journalistic integrity, US National Public Radio, who is running away from being recorded.

Gavasheli returned Haxel’s phone call a few moments later, having switched from a personal phone to a radio studio phone capable of recording conversations. Haxel answered none of the attempts to reach him and has not replied.

Let Listeners Hear for Themselves

We have to wonder: what kind of journalistic outfit gives its reporters permission to do interviews, but not for that interview to be recorded by the other party? Radio Sputnik Director of Communications Beverly Hunt reached out to KCUR’s news director, Maria Carter, to press the question in a Wednesday email that, when this story went to print, had also not been replied to.

“I am writing because Chris Haxel from your station called Mindia Gavasheli at Sputnik Radio earlier today requesting an interview,” Hunt wrote in an email supplied to Sputnik. “Mindia was happy to give the interview, asking that we do it on record from our studio so that we could broadcast it and people can listen to it in Kansas City.  At that point, Chris refused to do the interview.”

“Sputnik would like to know if it is the official KCUR policy to refuse to conduct interviews on the record,” Hunt asked. “Is KCUR’s policy that only they can record the interview – so they can edit it afterward as it suits them? Will your station allow Chris to do an interview with Radio Sputnik, so listeners in Kansas City can judge for themselves our principles?”

“Please know that we are happy to do a live interview with KCUR at any time. Being live is the only condition - no edits,” she added.

It should be noted that Gavasheli was interviewed by a New York Times reporter the day prior, who didn’t object to the same stipulations about their interview. Why is it that Times reporters may freely decide to be recorded by their interviewees, but not NPR reporters? Is it because NPR takes money from the US federal government? Isn’t it ironic that Sputnik reporters have more freedom in this regard than NPR reporters?

Short on the Facts

The thing is, from reading Haxel’s January 25 story, it seems like he could use as much information from the horse’s mouth as possible, given how badly he’s avoided it so far. The story, titled “Russian 'Propaganda Machine' Selects Kansas City As Its Second Radio Broadcast Site,” cites everything except people from Sputnik: legal documents, a report by the US Director of National Intelligence, and even Arnold Ferolito, the legal interlocutor between Sputnik News owner Rossiya Segonya and US radio stations carrying Radio Sputnik.

However, Haxel sought nothing more than an emailed statement from our Moscow press office giving little-to-no details about the story itself.

Indeed, Gavasheli said that in their brief conversation Wednesday, Haxel expressed belief that the Russian cuisine and cultural documentaries broadcast by Radio Sputnik on weekends constitute the bulk of the news agency’s activities. “I listened to some of the conspiracy theories so you don't have to,” Haxel said in a January 28 twitter post linking to his story, but he admitted to Gavasheli to having listened to no more than “a few hours” of the many radio shows we broadcast during the week - hardly a representative selection.

I guess we’ll know when his story comes out about how ice drumming on Lake Baikal and knowledge of an enormous variety of pickled foods aim to undermine the fabric of American society, such as it exists on the Great Plains?

WashPost Blasts Sputnik Radio For ... Reporting on Injustices Inside the US