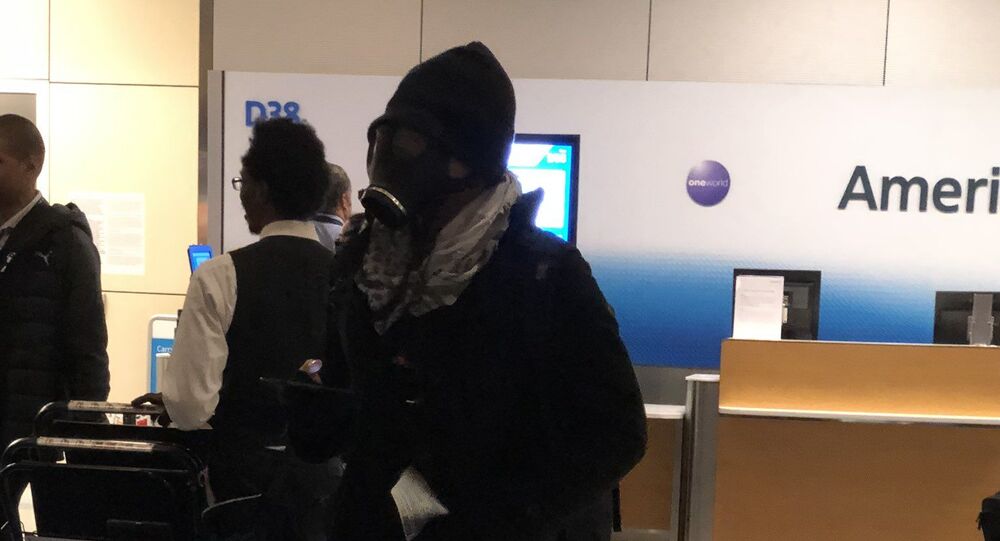 Travelers who boarded American Airlines flight 2212 at Dallas Fort Worth International Airport on Thursday reportedly landed in Houston almost an hour later than the planned arrival. One passenger was apparently very concerned about the latest developments surrounding the outbreak of the Wuhan coronavirus.

Passengers were instantly alarmed when they saw a man sitting nearby wearing entirely black colors and sporting a military-type gas mask. Most passengers immediately wanted this uncanny-looking person off the plane, The Daily Mail said.

"I had a seat in the back. I was sitting there. I was talking to the lady next to me. We heard a little bit of commotion. I looked up and saw a guy coming onto the plane wearing a full gas mask, which was kind of odd. He didn't have a filter, which I thought was more strange. Immediately, people start talking in the back of the plane. They were worried", an eyewitness said, cited by The Daily Mail.

@AmericanAir , Just FYI flight 2212 to Houston was delayed an hour because you let this guy on the plane wearing a gas mask. This then panicked people on the plane and we had to wait for him to be escorted off. @abc13houston @KHOU @HoustonChron @KPRC2 @FOX26Houston #trainbetter pic.twitter.com/mZkWea606d

A flight attendant reportedly then asked the person to stop his biohazard cosplay but the passenger categorically refused to remove his eerie outfit.

While the plane was still taxiing on the tarmac and preparing for take-off, local security services responded and escorted the man, whose identity reportedly remains unknown, off the plane.

According to the media report, the mysterious interloper was rebooked on another flight to Houston and the first plane successfully resumed its flight after a 50-minute delay.

American Airlines reportedly said that the man flew without the mask following the incident. According to the media report, the masked man had flown into Dallas Fort Worth from Los Angeles - a place where a specially-chartered plane with Americans arrived recently from virus-hit Wuhan.

It remains unclear if the man was wearing a gas mask during the LA-Dallas flight.

Some netizens suggested that the man's appearance strikingly resembled the outfit of "The Grim Reaper" - a fictional video game character and member of a special task team who was accidentally left alone in an infected city swarming with zombies from the universe of the Resident Evil series.

US health officials confirmed on Saturday an eighth case of the Wuhan coronavirus in the United States, and the US Department of Defence reported that it would provide special housing for people arriving from abroad who need to be quarantined.

© REUTERS / Martin Pollard
Countries, Companies Suspend Travel to China as Wuhan Coronavirus Rages On
According to the latest official figures, the pneumonia-type strain first detected in the Chinese city of Wuhan in December 2019 - dubbed 2019-nCoV - has already killed 259 people in China alone and has spilled into over 20 countries. The World Health Organization (WHO) has declared a global emergency over the outbreak.

Earlier this week, the US Centres for Disease Control and Prevention (CDC) registered the first-ever isolated case of human-to-human transmission of the 2019-nCoV.

Despite the gradually growing death toll and number of those infected, Chinese authorities have vowed to contain the spread of the infection.