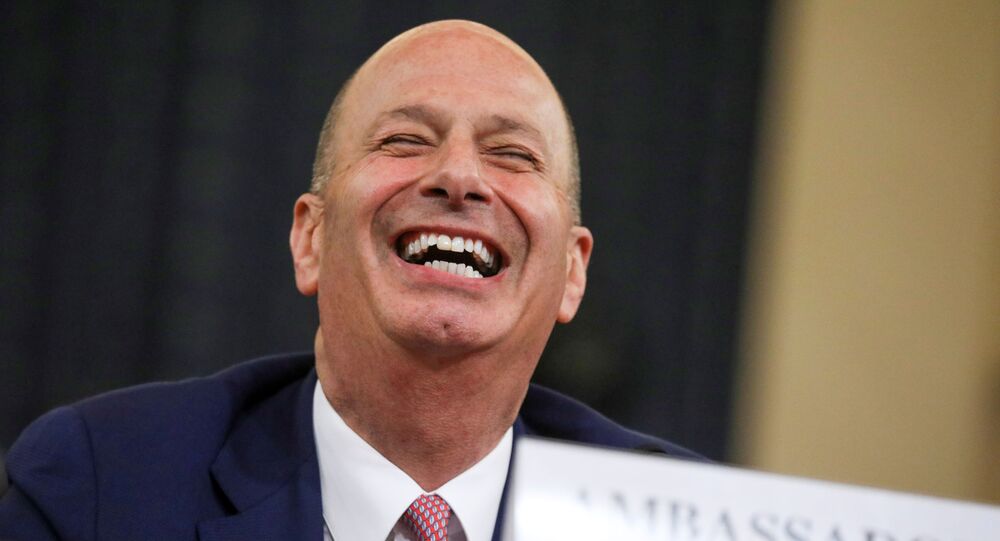 The allegations date as far back as 16 years ago, and come at a crucial time for Sondland, as one of the key witnesses in the ongoing Trump impeachment proceedings.

Three women have accused US Ambassador to the European Union Gordon Sondland of sexual harassment. The diplomat dismisses their accounts as “fundamentally false.”

The accusations were first jointly reported on Wednesday by ProPublica, a Pulitzer-winning non-profit investigative outlet, and the magazine Portland Monthly.

In the potentially damaging article, the three women claimed that Gordon Sondland harassed them when he was chairman of Provenance Hotels, the Portland-based chain of luxury hotels he founded.

Nicole Vogel, the owner and publisher of Portland Monthly, is one of the accusers. She alleged that she met Sondland in 2003, and attempted to solicit him to invest in her then-fledgling magazine and that he attempted to give her a forcible kiss, which she deflected.

As the talks continued, she recalled the businessman placing a hand on her thigh during a car ride on another day, an advance she also rejected. Sondland later cancelled plans to invest in her magazine in what Vogel’s lawyer described as an act of “retaliation”.

Vogel decided to come forward the day after Sondland gave his original testimony on Capitol Hill as part of the Trump impeachment inquiry in October, where he stood by Trump’s assertion that the suspension of congressionally-mandated military aid to Ukraine wasn’t used as leverage to pressure Ukraine into launching investigations into his political opponent, Joe Biden.

He later revised that testimony as to “recall” telling Ukrainian officials that they should commit to investigations if they want to receive the money, and testified that this arrangement constituted a quid pro quo.

Another alleged victim of Sondland, Jana Solis, was a hospitality safety engineer at the insurance company Marsh & McLennan when she met the businessman in 2008. She initially claimed they met in 2003 or 2004, but changed her story when Sondland’s lawyers noted that their client’s company started working with Marsh & McLennan only in 2008.

In her words, Sondland hired her to inspect safety and train staff at his hotel properties and then invited her to evaluate an art collection at his house, where he appeared before her “naked from the waist down”. He allegedly forcibly kissed her during another business interaction several months later.

“The next thing I know, he’s all over me,” she said. “He’s on top of me. He’s kissing me, shoving his tongue down my throat. And I’m trying to wiggle out from under him, and the next thing you know, I’m sort of rising up to get away from him, and I fall over the back of the couch.”

Solis claimed that Sondland subsequently called her place of work to “scream” at her and criticise her job performance.

A third woman, Natalie Sept, then a political operative in Portland, claimed Sondland tried to kiss her and pushed himself against her when they met to discuss a potential job. They never talked about her job prospects again, she added.

Sondland’s lawyers confirmed that the ambassador had met with all of the women but denied that there had been any misbehaviour on his part.

A statement on his personal website describes the women’s accounts as “fundamentally false” and suggests they were reported to influence the ongoing impeachment inquiry.

“Ambassador Sondland refutes the allegations entirely and intends to bring a lawsuit against those publications, their management, and others involved as swiftly as possible,” says the statement.

Sondland also noted that the reporters gave him just one-and-a-half business days to respond to the story, although it would be “next to impossible” to collect records to refute the allegations dating as far back as 16 years.