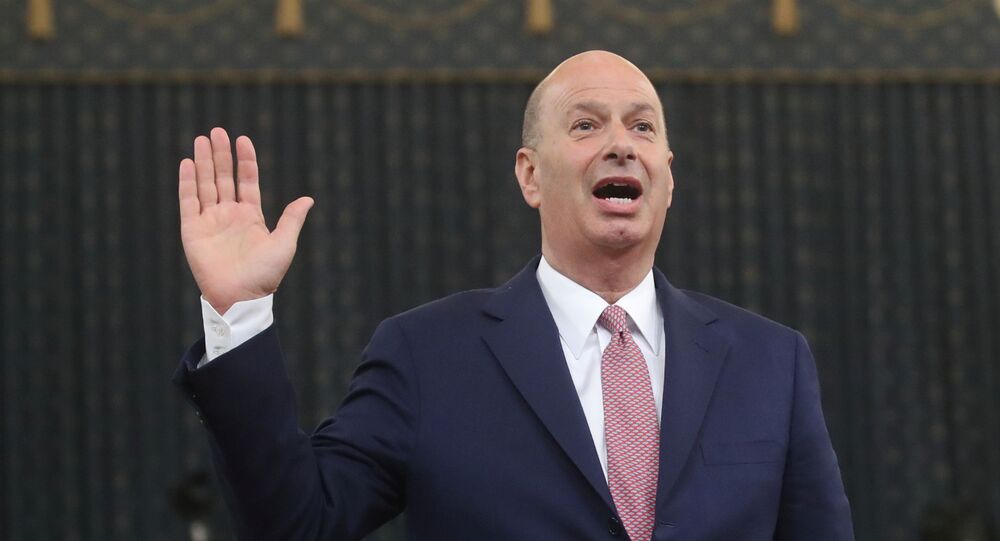 WASHINGTON (Sputnik) - US Ambassador to the EU Gordon Sondland has testified that President Trump's personal lawyer Rudolph Giuliani demanded that Ukraine publicly announce investigations of Trump’s political opponents and alleged interference in the 2016 election in return for arranging a White House visit for President Volodymyr Zelensky.

"Mr Giuliani requests were a quid pro quo for arranging a White House visit for President Zelensky. Mr Giuliani demanded that Ukraine make a public statement announcing investigations of the 2016 election/DNC server and Burisma," Sondland told the US House of Representatives Intelligence Committee during an impeachment hearing.

He alleged that Giuliani at the time was expressing "the desires of the President of the United States."

Sondland also said that he believed that the resumption of American aid to Ukraine was tied to the country's commitment to conduct investigations of President Donald Trump’s political rivals.

"I tried diligently to ask why the aid was suspended, but I never received a clear answer," Sondland told the US House of Representatives Intelligence Committee during an impeachment hearing. "In the absence of any credible explanation for the suspension of aid, I later came to believe that the resumption of security aid would not occur until there was a public statement from Ukraine committing to the investigations of the 2016 election and Burisma, as [Trump’s personal lawyer Rudolph] Mr Guiliani had demanded."

Sondland said that he rejected suggestions that he was engaged in "rogue diplomacy" in Ukraine and said State Department and White House senior personnel were informed of his efforts.

"We made every effort to ensure that the relevant decision makers at the National Security Council and State Department knew the important details of our efforts," Sondland told the US House of Representatives Intelligence Committee. "The suggestion that we were engaged in some irregular or rogue diplomacy is absolutely false."

Sondland pointed out that the leadership of the State Department, National Security Council and the White House "were all informed" about activities in Ukraine from 23 May until US security aid for the country was released on 11 September.

The Head of the US House Intelligence Committee, Adam Schiff, described Sondland's testimony as "a very important moment in the history of this inquiry."

"It goes right to the heart of the issue of bribery as well as other potential high crimes and misdemeanours. But we also have heard for the first time that knowledge of this scheme was pervasive," Schiff said as quoted by Reuters.

Meanwhile, the office of Vice President Mike Pence denied testimony by Sondland that the two men had a conversation on 1 September about the delay in US aid to Ukraine.

"The Vice President never had a conversation with Gordon Sondland about investigating the Bidens, Burisma, or the conditional release of financial aid to Ukraine based upon potential investigations," Marc Short, Pence's chief of staff, said in a statement. "This alleged discussion recalled by Ambassador Sondland never happened."

An impeachment inquiry against Donald Trump was initiated by House Democrats last month following a whistleblower's complaint that the US President had allegedly pressured his Ukrainian counterpart during a July phone call to investigate potential corrupt activities by ex-Vice President Joe Biden, Trump's rival in the upcoming presidential elections, in exchange for $400 million in military aid.