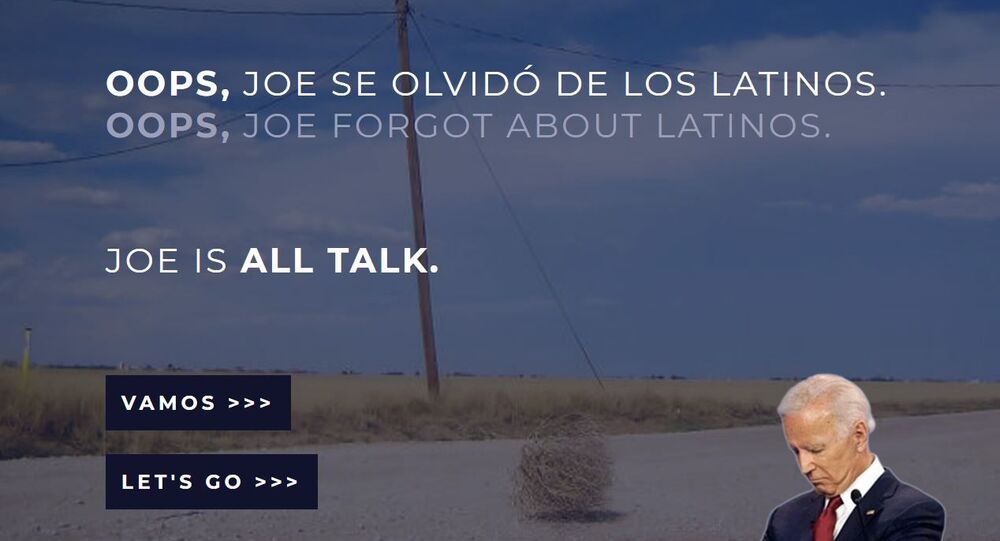 This is what happens when a candidate announces a big undertaking but fails to secure the intellectual property first.

On Wednesday, Biden spent the day campaigning in Pennsylvania and Iowa. During his rallies, he announced a new network aimed specifically at Latino voters, and called it ‘Todos Con Biden’ (Everyone with Biden).

The Dem candidate forgot to register the Internet domain or even take the Twitter handle and Trump supporters quickly seized the opportunity, buying the domain and putting up a fake website mocking Biden’s Latino outreach.

“Oops, Joe forgot about Latinos,” the website reads in English and Spanish. “Joe is all talk.”

When a user clicks on a ‘Let’s go’ button, the website redirects them to the Trump 2020 campaign website.

“I believe the [border] fence is needed…[because] people are driving across that border with TONS, TONS, hear me, TONS of everything from byproducts for methamphetamine to cocaine to heroin and it's all coming up through corrupt Mexico.” - Joe Biden pic.twitter.com/NrAsuPmW6V

​The Twitter handle @TodosConBiden offers more content, as it is filled with video footage of Biden supporting anti-immigration measures, a move Trump is often criticized for. Videos and critical posts are mixed with Biden’s gaffes on sensitive topics, including family separation and the notorious “poor kids are just as bright and just as talented as white kids” performance.

“Poor kids are just as bright and just as talented as white kids.” - Joe Biden pic.twitter.com/f6u9JnpQ96

​“Joe Biden launched his Latino coalition today but forgot to register the web address,” the @TrumpWarRoom Twitter account boasted on Wednesday. “Don't worry Joe, we took care of it for you!”

Don't worry Joe, we took care of it for you!https://t.co/FV05VpaOEK