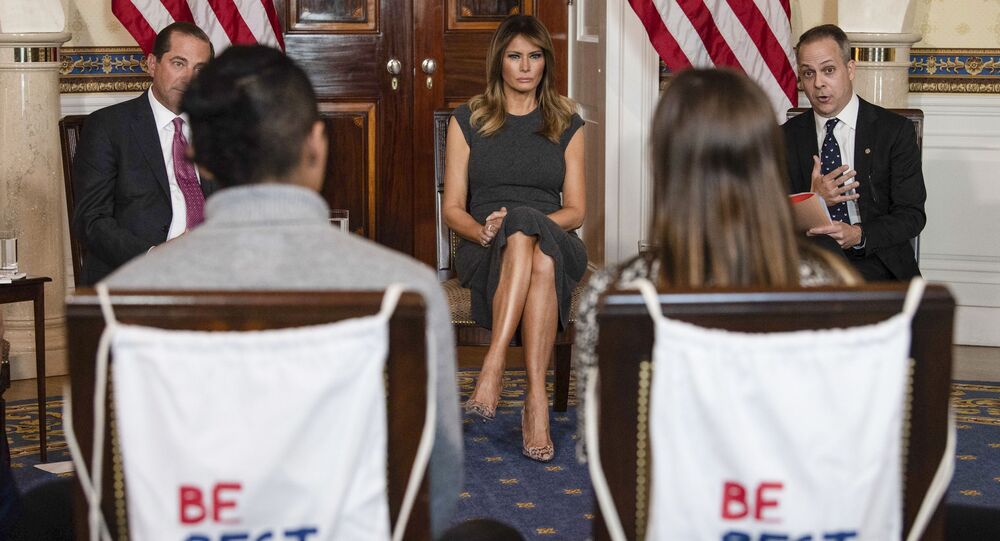 Last month, the US First Lady went on Twitter to voice alarm over “the growing epidemic of e-cigarette use” by children. She also called for more steps to prevent such cigarettes from “becoming an on-ramp to nicotine addiction for a generation of youth.”

US First Lady Melania Trump has expressed satisfaction over the fact that a number of stores in the country are pulling electronic cigarettes off the shelves amid an increasing death toll from vaping-related illnesses.

“We need to be proactive before it gets out of control,” she said during Wednesday’s White House "listening session" where a small group of teenagers from across the US told her about how vaping affected their lives.

Aged from 13 to 18 years old, the teenagers were part of the Truth Initiative, which touts itself as the largest non-profit public health organisation dedicated to eradicating tobacco use.

During the session, Trump specifically praised a 12-year-old boy for his decision to quit vaping after he admitted that he got in "a lot of trouble" both with school administrators and his parents, saying that she was “proud” of him.

“Hey, this is really an issue”, another teenager told the First Lady after he said that his parents had sent him away for treatment when he had a heart attack at 15 due to his using e-cigarettes for about a year.

The session came after the First Lady attended the Drug Enforcement Agency (DEA)'s drug-free Red Ribbon event, where she warned of the dangers of e-cigarettes and vaping.

“It is important to me that we all work to educate children and families about the dangers associated with this habit. Marketing this addictive product to children must stop,” she underscored.

This followed US President Donald Trump’s announcement on 11 September that his administration would evaluate a ban on the sale of non-tobacco flavoured vaping liquid after several deaths and lung injuries in the US.

“We can’t allow people get sick, and we can’t have our youth be so affected,” Trump said at the time.

The move was preceded by Melania Trump tweeting earlier that month that she is “deeply concerned about the growing epidemic of e-cigarette use in our children,” also urging the government to do its best to protect Americans from tobacco-related diseases.

Anne Schuchat, the principal deputy director of the US' Centres for Disease Control and Prevention, has revealed that 18 individuals are dying from vaping-related illnesses across 15 US states.

“We haven’t seen a measurable drop in the occurrences of new cases. The data that we’ve seen doesn’t suggest it has peaked, it doesn’t suggest this is declining,” she told reporters earlier this month.

Her remarks came as several states, including New York and Michigan, as well as the city of San Francisco, have moved to ban flavoured e-cigarettes.