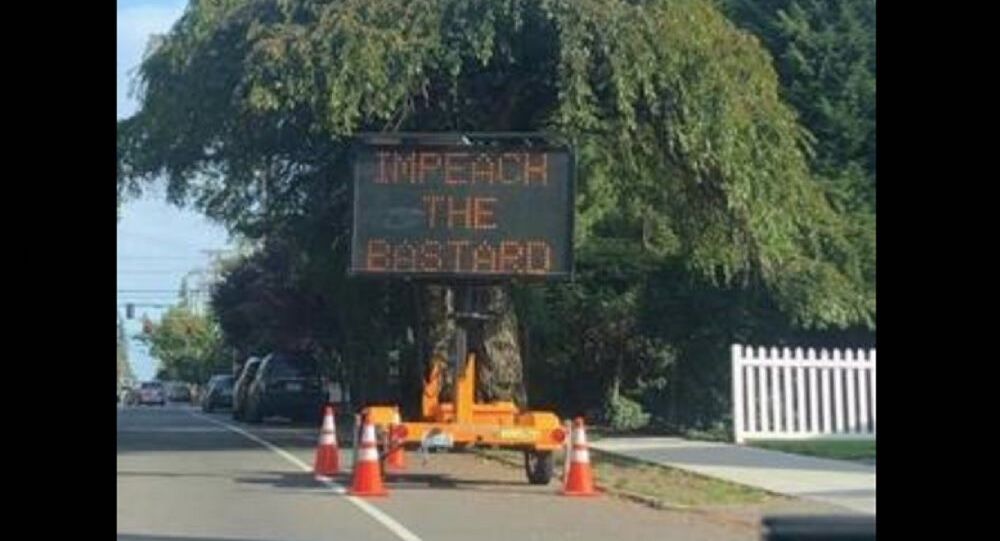 The partial transcript of the US and Ukrainian presidents’ July phone talk saw the light of day on Wednesday, with the content used by Dems as fuel for renewed impeachment calls, largely silenced by Robert Mueller’s report busting allegations that Trump's campaign colluded with Russia during the 2016 presidential race.

A hacker broke into the coding system of an electronic road sign in Seattle in the early morning hours on Wednesday and changed the pop-up message to read “Impeach the Bastard,” local news station Q13 reported, citing the Seattle Department of Transportation. The sign was changed back to the initial message within a few hours, with additional locks being put in place to prevent further hacks.

The anti-Trump message came a day after Speaker Nancy Pelosi announced the House would proceed with a formal impeachment inquiry into the president amid recent controversial reports that Trump pressed Ukrainian President Volodymyr Zelensky to investigate the Bidens, including  former Vice President Joe Biden’s son Hunter in his reportedly high-ranking position on the board of a Ukrainian gas company.

A five-page partial transcript of the president’s 25 July phone call with Zelensky was released on Wednesday, having been authorszed by Trump himself, and it has the US president urging his Ukrainian counterpart to “look into” the corruption allegations over Hunter Biden as well as Joe Biden, currently a Democratic front-runner in the upcoming presidential vote, who "went around bragging that he stopped the prosecution" into his son’s possible corruption in Ukraine.

The release appeared to be like a red rag to a bull, with the Democratic camp accusing Trump of abuse of power and calling for his impeachment, while the Republicans have brushed off the memo as nothing new, arguing the nature of the phone call doesn’t constitute legal grounds for the president’s impeachment. Calls for the latter were previously voiced as the public awaited the results of the two-year investigation by Special Counsel Robert Mueller, who ruled there was no collusion with Russia during Trump’s 2016 campaign.

Pelosi alleged that Trump's request to the Ukrainian president to probe Biden is an invitation to intervene in the US election and is essentially a breach of his constitutional responsibilities.

According to Pelosi, the acting director of national intelligence, Joseph Maguire, will decide on Thursday whether he will hand over the full text of the original complaint by the whistle-blower cited by American press last week to the House Intelligence Committee, or break the law by withholding it.

The president himself, during a press conference after the release of the memo, blasted Democrats for a “hoax” and “a witch hunt” that constituted nothing more than presidential harassment.

Ukrainian President Volodymyr Zelensky, in his turn, stressed that he hadn't felt pressured during the July phone conversation with his US counterpart, referring to the phone talk as a "good and normal" one.

Trump's request to Zelensky focused on a controversial move by Joe Biden in early 2017, when the then outgoing vice president threatened to backtrack on aid to Ukraine unless the county fired chief prosecutor Viktor Shokin, who was at the time investigating a Ukrainian company that employed Biden’s son over corruption charges.

Meanwhile, the anonymous whistle-blower who had filed the complaint had warily agreed to testify before Congress, on the condition that lawyers would also be allowed to the hearing, CNN reported Wednesday.