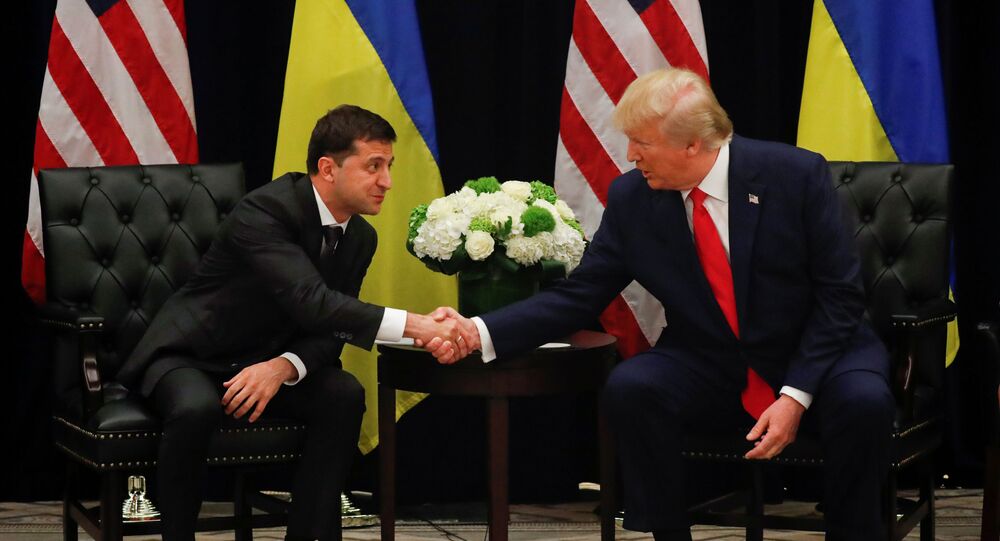 Trump had promised to release a "complete, fully declassified and unredacted" transcript of the July phone call, which prompted Congressional Democrats to launch an impeachment inquiry over the president's alleged illegal attempt to pressure Kiev to restart a probe into possible illegal activities by former Vice President Joe Biden's son.

The Justice Department has released a declassified five page transcript of President Trump's July 25, 2019 phone call with Ukrainian President Volodymyr Zelensky, with the transcript published, in PDF form, on the White House's website.

In the transcript, Trump asks Zelensky if he could "do us a favour" and allow Ukrainian officials to cooperate with the US attorney general to investigate Crowdstrike, the company hired to investigate the hack of the Democratic National Committee during the 2016 election, whose server Trump said Ukraine has access to.

After Zelensky agrees, Trump turns to the case of Viktor Shokin, a Ukrainian prosecutor investigating the Burisma energy company, who was sacked in 2016 while probing whether or not then-Vice President Joe Biden's son Hunter Biden had engaged in any illegal activity with Burisma in Ukraine while serving on the company's board of directors.

"I heard you had a prosecutor who was very good and he was shut down and that's really unfair. A lot of people are talking about that, the way they shut your very good prosecutor down and you had some very bad people involved," Trump says.

"The other thing, there's a lot of talk about [former Vice President Joe] Biden's son, that Biden stopped the prosecution and a lot of people want to find out about that so whatever you can do with the Attorney General would be great. Biden went around bragging that he stopped the prosecution so if you can look into it...It sounds horrible to me," Trump says.

Significantly, Trump appears to make no mention of US military or economic aid to Ukraine. This challenges claims made by the Democrats, who initiated an impeachment inquiry against Trump on Tuesday, and alleged that he may have ordered the freezing of some $400 million in military assistance to Ukraine in the days before the Zelensky phone call, supposedly to pressure the new president to cooperate on the Biden inquiry.

Zelensky does bring up US military aid, but only to thank Trump. "I would also like to thank you for your great support in the area of defence. We are ready to continue to cooperate for the next steps, specifically, we are almost ready to buy more Javelins from the United States for defence purposes," Ukraine's president says.

After the transcript was released, Trump took to Twitter to ask if the Democrats would "apologise" to him "after seeing what was said on the call with the Ukrainian President."

"They should," Trump suggested, saying it was a "perfect call!" and complaining that there "has been no President in the history of our Country who has been treated as badly as I have."

Trump reiterated his "witch hunt" claims later Wednesday, telling the New York Times that the impeachment inquiry against him was "a disgraceful thing."

Democratic House Speaker Nancy Pelosi, who had announced the formal impeachment inquiry into Trump over the Zelensky phone call, said the transcript of the call had "confirmed" that Trump's behaviour had 'undermined' the integrity of US elections and national security.

"The release of the notes of the call by the White House confirms that the President engaged in behaviour that undermines the integrity of our elections, the dignity of the office he holds and our national security. The President has tried to make lawlessness a virtue in America and now is exporting it abroad," a statement put out by Pelosi's office said.

Pelosi's statement reiterated the Democrats' complaint accusing Trump of using "taxpayer money to shake down other countries for the benefit of his campaign," saying this was "not part of his job."

"The transcript and the justice Department's acting in a rogue fashion in being complicit in the President's lawlessness confirm the need for an impeachment inquiry. Clearly, the Congress must act," the statement said.

“The President engaged in behavior that undermines the integrity of our elections, the dignity of the office he holds and our national security. The President has tried to make lawlessness a virtue in America and now is exporting it abroad." pic.twitter.com/jFatU2VI4G

Earlier, Pelosi tweeted a short clip in which she said that a president asking foreign governments to "investigate a political opponent" (in this case Joe Biden) was "not right."

No. You *don't* ask foreign governments for help in our elections. That *is not* right. pic.twitter.com/gduXHWDNkK

Nadler/Schiff/Cummings/Engel statement on the release of the Trump/Ukraine call: "The transcript is an unambiguous, damning, and shocking abuse of the Office of the Presidency for personal political gain." pic.twitter.com/gulQm71Vpp

In a tweet, Nadler demanded that Attorney General Barr recuse himself of any Ukraine-related investigations (presumably including one into the activities of Biden's son) given the contents of the call.

The President dragged the Attorney General into this mess. At a minimum, AG Barr must recuse himself until we get to the bottom of this matter. #UkraineTranscript https://t.co/lBMsllCafp