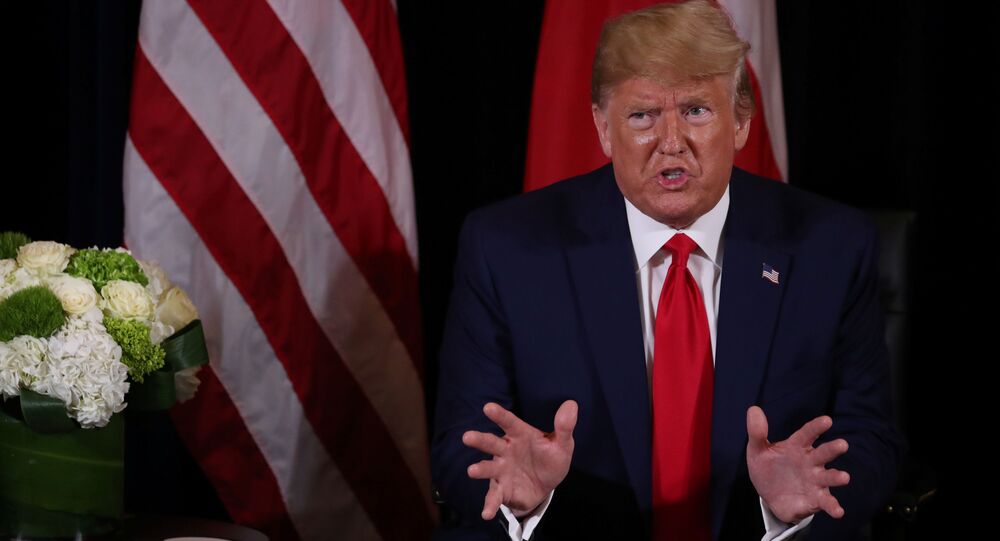 Speculation abounds that Donald Trump urged a foreign leader – thought to be Ukraine’s new president – to investigate the son of Joe Biden, his potential rival in the 2020 election.

US President Donald Trump, in his umpteenth rant at the Democratic Party, has hit back at claims that he offered Ukraine a quid pro quo in exchange for digging up some dirt on Joe Biden – in a battle where the White House could be at stake.

“Joe Biden and his son are corrupt,” Trump claimed during a joint presser with Poland’s president during the UN summit, “but the fake news doesn’t want to report it because they’re Democrats.”

What Has Happened and Why is Biden Involved?

It emerged last week that a yet-unidentified intelligence officer had learned about an unspecified promise that Donald Trump allegedly made to a foreign leader. As initially reported by The Washington Post, the officer found the promise so “troubling” that he submitted a whistleblower complaint to Michael Atkinson, inspector general for the intelligence community.

The Wall Street Journal then picked up the story, reporting that the complaint revolved around a 25 July phone call between Donald Trump and Ukrainian President Volodymyr Zelensky. The WSJ suggested, citing White House insiders, that Trump had repeatedly pressured Zelensky to investigate former Vice President Joe Biden’s son, Hunter Biden, who was a board member of Burisma Holdings, a major Ukrainian natural gas company, between 2014 and 2019.

The Washington Post later reported that prior to that call, Trump had ordered to hold back $400 million in military aid to Ukraine, which was partly released on 11 September – with the timing of this decision raising questions as to whether it could have been used as a leverage in talks with Zelensky.

What Was the Reaction in Washington?

Trump has confirmed that he had discussed the Bidens and corruption with the Ukrainian president, but denied withholding the funds or trying to bully Zelensky into investigating Hunter Biden.

Biden – who is currently leading the 2020 Democratic primary polls – demanded that the transcript of the phone call  be released. If confirmed, he said, the reports would mean an abuse of power that “undermines our national security for political purposes.”

Democratic lawmakers now want to investigate the claims, but the Trump administration has so far failed to turn over the complaint or release the transcript. Trump promised, though, that he would consider releasing details from the call.

House Speaker Nancy Pelosi said on Sunday that by refusing to disclose the matter to Congress, the White House risks “entering a grave new chapter of lawlessness” – a warning many observers saw as referring to potential impeachment proceedings.

Joseph Maguire, the acting director of National Intelligence, has been subpoenaed and is expected to testify on the case before the House Intelligence Committee on Thursday.