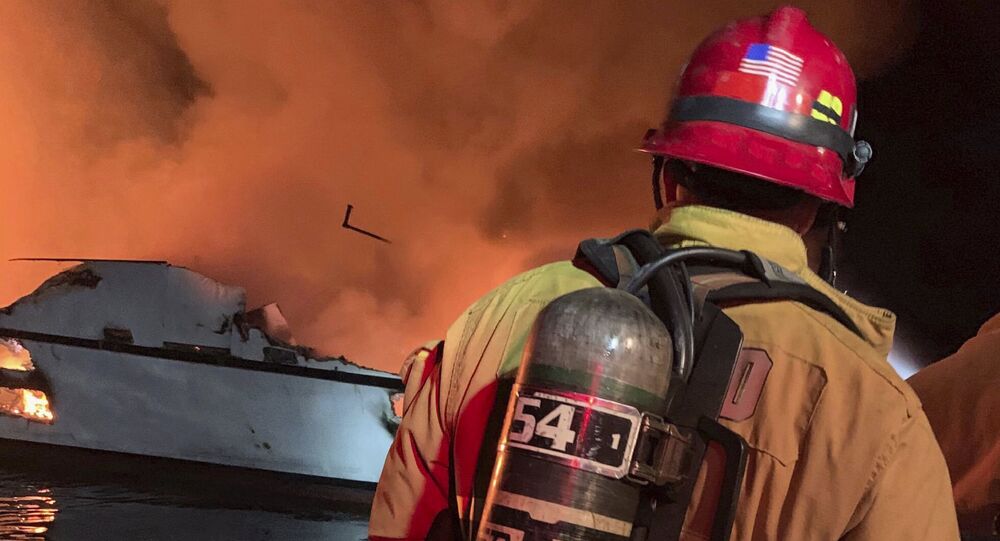 The US Coast Guard reported on Monday that a rescue operation was underway off the Ventura County coast.

Santa Barbara County Sheriff Bill Brown said that four bodies were found on ocean floor near the burned boat off California coast, while four other bodies were recovered, Reuters reported.

Previously, the Santa Barbara Fire Department told ABC News on Monday that five people were rescued, while 34 were missing as a result of a fire on a vessel. The US Coast Guard back then confirmed the reports about 34 people missing.

#CoastInc: @VCFD responded to boat fire off the north side of Santa Cruz Island at approximately 3:28am. @USCG helping support rescue operations for people aboard a dive boat. #ChannelIslands @USCGLosAngeles @CountyVentura @SBCOUNTYFIRE pic.twitter.com/DwoPGfBjtA

According to the US Coast Guard’s Los Angeles office, it has rescued a group of crew members, one with minor injuries.

"Five people were evacuated aboard a good Samaritan pleasure craft known as the Grape Escape. Currently, 34 people aboard the vessel are unaccounted for," Capt. Monica Rochester told reporters.

She said that there had been 39 people aboard the stricken boat. It eventually sank 20 yards offshore in 64 feet of water as firefighters were battling the blaze. A portion of the bow is still sticking out of the water.

Capt. Rochester said the crew were all awake on the bridge when the fire broke out and were able to jump off the boat. The passengers are believed to have been below the deck. She did not say whether the crew had tried to help them.

She stressed that the Coast Guard was still in a "response phase" searching the shoreline and water for any possible survivors. She could not say if there were divers in the water looking for them.

Later, media reported citing local officials that at least four people were killed and 29 remained missing after the incident.

​Earlier in the day, the USCG Los Angeles said via Twitter that it was responding to an emergency situation on a vessel off the coast of California.

“The Coast Guard has launched multiple rescue assets along with assets from local agencies to assist more than 30 people in distress on a 75ft boat near Santa Cruz Island,” the agency said via Twitter.

BREAKING NEWS: The Coast Guard has launched multiple rescue assets along with assets from local agencies to assist more than 30 people in distress on a 75ft boat near Santa Cruz Island. More details will be available later as this operation continues.