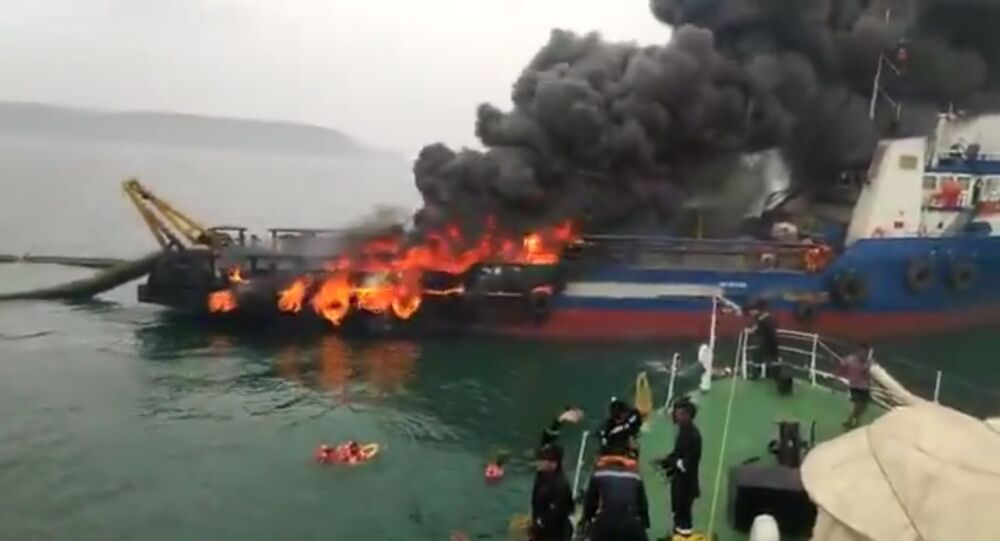 New Delhi (Sputnik): At least one crew member went missing while 28 others were rescued on Monday when a massive fire engulfed an Indian vessel at the Vizag coast, located in the southern Indian state of Andhra Pradesh.

The incident occurred at 11:30 local time (Indian Standard Time) on Monday.
The video released by the Indian Coast Guard shows crew members of the 'Jaguar' jumping into the water to save themselves from flames and possible explosions.

"29 crew members of the Offshore Support Vessel Jaguar jumped into the water after a fire engulfed the vessel," an official said commenting on the incident.

#WATCH Visakhapatnam: At 11:30 am today, 29 crew members of Offshore Support Vessel Coastal Jaguar jumped into water after a fire engulfed the vessel. 28 rescued by Indian Coast Guard. Search for 1 missing crew underway. Exact cause of fire yet to be ascertained. #AndhraPradesh pic.twitter.com/pksYGrC9ZE

The Coast Guard has been searching for the missing crewmember. "The exact cause of the fire is yet to be ascertained," an official added.

The Indian Coast Guard Ship 'Rani Rashmoni', has been diverted to conduct the rescue operations.

Since the 2008 terror attack in Mumbai, the government has strengthened the capabilities of the Indian Coast Guard, increasing its fleet strength to 113 vessels and 64 aircraft compared to 61 boats and 46 aircraft in 2008.