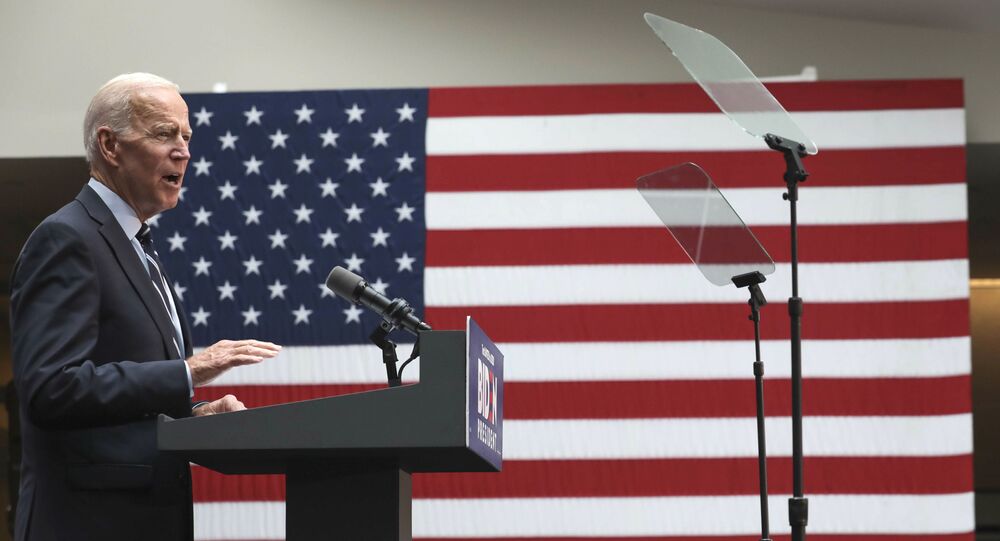 US Democratic presidential candidate Joe Biden has not only remained the frontrunner but has stayed steady or improved his performance in primary polls, despite coming under fire of late for numerous cringeworthy blunders made on the campaign trail.

A video shows former US Vice President Biden extolling the “beauty” of Vermont after a journalist asks about his "impression" of the town, situated in southwestern New Hampshire, near the state's border with Vermont.

"I love this place. Look, what’s not to like about Vermont in terms of the beauty of it? And what a neat town, this is like a scenic, beautiful town. The mayor's been a good guy, everybody has been really friendly. I like Keene a lot", responded Biden.

Biden talks w/press in Keene, NH: "I love this place. Look, what’s not to like about Vermont in terms of the beauty of it? And what a neat town...everybody has been really friendly. I like Keene a lot." pic.twitter.com/0hKsgiDfwM

​Twitter users were quick to respond to the frontrunner’s latest gaffe, with some convinced he needed to up his game:

Democrats, please wake up about Biden before the primaries start.

Kamala Harris is the candidate to the left of Biden, but with pragmatic ideas like the LIFT Act.

All kidding aside, there's something seriously wrong with Biden. I feel for him.

At this point, he's just embarrassing himself. His family should have the decency to intervene. #SleepyJoe

​Some believed the verbal errors by the candidate were being blown up out of all proportion:

OMG HE IS THE FIRST PERSON TO MAKE A MISTAKE... Trump never has that’s for sure 🙄🙄🙄

Come in people! Enough. He is old tired and this is getting stupid. Pretty soon we can make a Joe Biden gaff calendar

😳 can we just please go with someone younger? I’m 62 so I’m not being rude - honestly he’s had a great run and we love him for it, but us boomers need to move aside. Please!!

​The Democratic frontrunner, 76, is famous for being prone to cringeworthy gaffes, and has been criticised in recent months for verbal blunders on the campaign trail. Thus, Biden told an audience of Asian and Hispanic voters that “poor kids are just as bright and just as talented as white kids", misstated the decade in which King and Kennedy were killed, and more recently raised eyebrows at a town hall event focused on health care in New Hampshire on Friday when he asked to imagine if former President Obama had been assassinated.

There were also reports of him allegedly touching and embracing women without their express permission to do so.

In a sign of how virulent the presidential hopeful’s missteps were becoming, The Hill reported on 15 August that his advisers were even considering limiting Biden’s public appearances, particularly late in the day, when he tends to say embarrassing things.

“A lot of people are nervous that he’s lost some of his mojo", a major Democratic donor told the publication.

President Donald Trump fired a salvo at the error-prone Biden earlier this month, suggesting he was not "playing with a full deck".

He's not playing with a full deck...

Joe Biden gets confused, calls the G7 the G8 pic.twitter.com/60wPQeZQ0u

​The Hill reports of other candidates also making the occasional verbal misstep while campaigning of late.

Former Rep. Beto O'Rourke (D-Texas) reportedly mixed up South and North Carolina during a campaign stop in Greensboro in April, while Sen. Elizabeth Warren (D-Mass.) misspoke while referring to California and Washington DC earlier this week.

Gaffes aside, though, Joe Biden holds a strong lead nationally over the Democratic primary field in most polls, despite being recently overtaken by top rival Sen. Bernie Sanders (I-Vt.) in a recent poll for the New Hampshire primary.