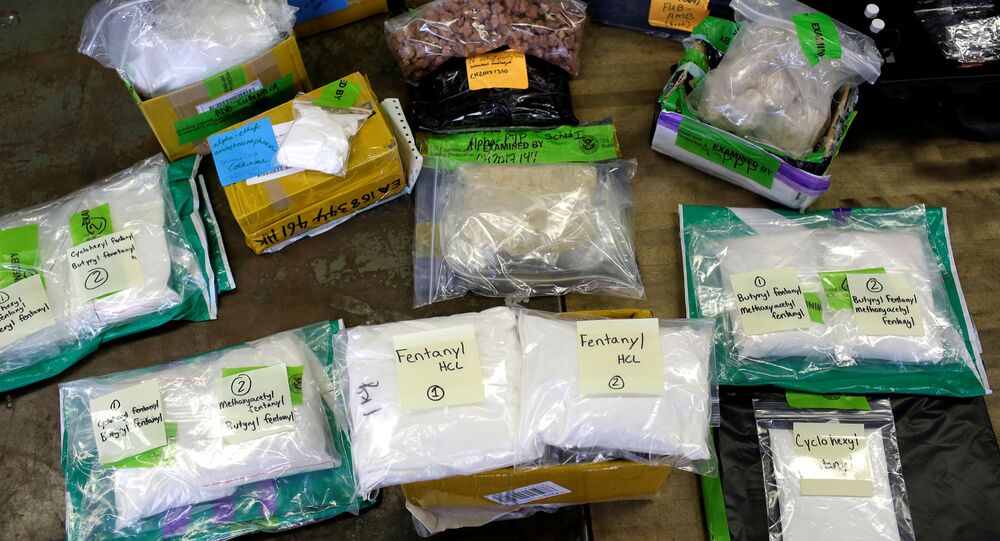 Having called the opioid epidemic a public health emergency in 2017, the US is taking steps to eradicate the problem, which has seemingly spiralled out of control. However, the initiatives proposed by the Trump administration are apparently getting swamped.

The phenomenon that is known today as the opioid endemic originated in the US in the 1990s, when the country's health care providers stepped up prescriptions of opioid pain-killers, relying on the pharmaceutical companies' assertion that patients would not become addicted to the drugs.

Yet, as the US Department of Health and Human Services (HHS) later admitted, the increased prescription of opioid medications led to the widespread misuse of both prescription and illicit opioids indicating that these medications proved to be "highly addictive".

Despite the US authorities cracking down on the use of opioid pain relievers as early as 2007, drug addicts switched to cheap synthetic substances, most notably fentanyl.

While all opioids have the potential to be misused, illicit fentanyl is regarded as one of the most dangerous among synthetic opioids with some forms of it being "100 times stronger than morphine and up to 15 times more potent than heroin", as Dr Lawrence Weinstein, American Addiction Centres’ chief medical officer, says.

According to the Drug Enforcement Administration's (DEA) 2018 National Drug Threat Assessment, in 2017 alone, synthetic opioids such as fentanyl were involved in nearly 30,000 deaths. For its part, the National Institute on Drug Abuse's (NIDA) findings indicate that the proportion of fentanyl-related overdose deaths jumped from 14.3 percent in 2010 to 59.8 percent in 2017.

Although the Centres for Disease Control (CDC) and Prevention's preliminary data has recently indicated a 5-percent drop in drug overdose deaths (68,000 in 2018 versus over 72,000 in 2017) involving both prescription and illicit drugs, it is far too early say when the epidemic will be tackled.

How Synthetic Opioid Fentanyl Finding Its Way Into US

In October 2017, President Donald Trump declared the opioid crisis a public health emergency. Trump's Initiative to Stop Opioid Abuse, released in 2018, envisaged reducing demand and over-prescription, cutting down on the supply of illicit drugs by cracking down on drug cartels, and helping those addicted with recovery support services.

While the rate of new opioid prescriptions is declining, illicit opioids continue to flow into the country.

"The problem is not pharmacies, it is not doctors and it is not legal drugs", says Arizona Republican Congressman Paul Gosar. "The deaths and overdoses are due to illegal drugs coming from Mexico. We have to secure the border now to stop these drugs and stop the carnage".

Tarrant County Sheriff Bill Waybourn believes that the growing number of drug interceptions indicates that much more is ending up in the hands of US drug dealers: "If we seize 80 tonnes, we could have missed 5 times that amount, because they actually plan in their business plan for people to get caught, they plan for that loss", he said.

Drug mobsters have switched to cheaper synthetic opioids due to their profit potential. One kilogram of fentanyl purchased for $3,000 - $5,000 can generate up to $1.5 million in revenue, according to a US Immigration and Customs Enforcement October 2018 report. The document revealed that illicit fentanyl and its analogues are smuggled into the US either through mail carriers, or through transnational criminal organisations (TCOs) in Mexico, Canada, and the Caribbean. TCOs, including the Sinaloa Cartel and Jalisco New Generation Cartel, remain the principal wholesale illicit drug sources in the country.

"I think that the drug cartels are an enemy of the state, to be quite honest with you", Sheriff Waybourn highlighted.

© AP Photo / Ramon Espinosa
Migrants cross the river at the Mexico-U.S. border after getting past a line of Mexican police at the Chaparral crossing in Tijuana, Mexico, Sunday, Nov. 25, 2018

"The absolute main flaw that the United States has is that we have an insecure southern border. We know for a fact that the cartel is moving lots of drugs through the southern border, and it’s not secure", Sheriff Waybourn said, explaining that drug cartels are also taking advantage of migration issues as they "are using asylum seekers from many other countries to come across and distract our border patrol people, [they have to] take care of these people, and [meanwhile] they are freely moving across the border in other sectors".

According to the sheriff, the construction of a wall on the southern border with Mexico could become a real game-changer.

"I think if we had the wall and they were are still trying to smuggle, you would see those numbers that the DEA are talking about double and triple, because if we can funnel people to where the border patrol has plenty of help, instead of taking care of asylum seekers, I think that would make a huge difference", the sheriff said.

Derek Maltz Sr, a former senior official from the Drug Enforcement Administration (DEA), echoed Waybourn: "A wall is going to help focus the border patrol resources on the passengers and the cargo and the contraband coming in through the ports of entry".

President Trump’s push to deal with drug trafficking by constructing a physical barrier has been met with widespread resistance from Democrats. Democratic lawmakers have been repeatedly downplaying the southern border crisis, instigated by migrant caravans from Central America, as "non-existent".

It appears that US laws do not make it easier for law enforcement agencies to tackle the problem: according to the Centre for Immigration Studies (CIS), the Democratic-backed "sanctuary cities" – cities which adopt certain policies to shelter illegal immigrants – "deliberately limit, block, or prohibit communication and cooperation with federal immigration agencies" complicating the federal agencies' efforts to expose and detain drug smugglers.

"These politically motivated policies are particularly destructive to law enforcement efforts to combat the opioid epidemic", Jessica M. Vaughan, the director of Policy Studies for the CIS, told the House's Subcommittee on Immigration and Border Security on 15 February 2018.

Despite Trump's repeated warnings, sanctuary jurisdictions are signalling their unwillingness to cooperate with federal immigration agencies, including Immigration and Customs Enforcement (ICE), which is tasked with deporting illegal immigrants.

While at least 33 states had either introduced or enacted bills requiring local authorities to cooperate with ICE by April 2017, several states including California, Illinois, Maryland, Nevada, and New York have challenged the legislation. All of those listed are known as Democratic strongholds.

"Obviously the laws have to be updated", former DEA official Derek Maltz opined. "I mean the United States has a lot of antiquated laws and policies and we are in a different situation today than we were in many years ago. We have lots of immigrants coming in from Central America. So it is not just Mexican citizens, it is from countries around the world. So they have to update the laws and review the regulations on asylum seekers because obviously it is very broken right now".

The Left Calling to Dismantle ICE & DHS Amid Opioid Crisis

The Southern Poverty Law Centre (SPLC), a left-wing non-profit legal advocacy organisation, included a wide range of right-wing anti-immigrant groups such as the Center for Immigration Studies (CIS), Federation for American Immigration Reform (FAIR), and many others on its "hate list" along with neo-Nazis and the Ku Klux Klan (KKK).

In July 2018, a number of Democratic lawmakers supported an initiative aimed at abolishing the US Immigration and Customs Enforcement (ICE). The movement "Abolish ICE" kicked off in June 2018 over the Trump administration's policies on illegal immigration, including the president's controversial "family separation".

ICE is operating exactly as designed when it rips screaming children from parents. That’s exactly why we must abolish it.

We MUST have the moral and political courage to #abolishICE.

Weak half-measures do nothing. This is a defining moment of our time - the time to act is now. pic.twitter.com/0viiQ4qdz8

​Earlier, in February 2018, a US left-leaning media outlet, The New Republic, called to "dismantle" ICE's parent organisation, the Department of Homeland Security (DHS), claiming that "the case for abolishing the wasteful, incompetent, and abusive mega-agency has become especially urgent under Trump".

While Democrats are continuing to play the immigrant card, the opioid crisis continues to rage on with no end in sight.