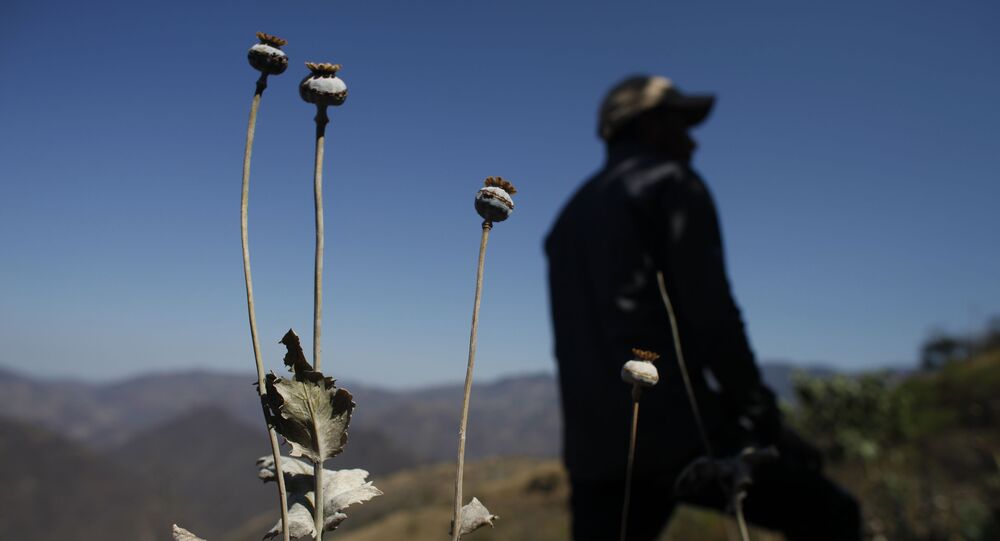 In times when opioids are causing more deaths in the world than ever before, Mexico is positioned as one of the world’s largest opium producers, second only to Afghanistan.

The epidemic of death from the use of opioids has ceased being a problem affecting the United States alone. The United Nations World Drug Report 2019 warned that Europe and Africa have also begun to suffer from this.

Although the document states that world opium production in 2018 decreased compared with the historical maximum reached in the previous year, this figure is the second largest in the last decade and amounts to 7,790 tons.

Three countries dominate this oligopoly: Afghanistan, Mexico, and Burma. According to United Nations Office on Drugs and Crime (UNODC) reports for 2015-2016 and 2016-2017 published in 2018, opium poppy cultivation in the Latin American country has steadily increased from 6,900 hectares in 2007 to 30,600 hectares in 2017.

This phenomenon is partly due to Mexico's northern neighbour. "The United States is the world's largest consumer of opioids, and Mexican criminal organisations are positioning themselves as suppliers", Inés Giménez, a researcher of Latin American Studies at the National Autonomous University of Mexico of Mexico (UNAM), said.

However, when analysing the growth of poppy production on Mexican territory, other factors must be taken into account. The signing of the North American Free Trade Agreement (NAFTA) in 1994 caused damage to Mexico’s agricultural sector. Subsidies were cancelled, and the abolition of tariffs affected sales of local products. Many farmers chose to replace their food crops with others, such as poppies.

Closer to the 2000s, US legislation on medical prescriptions for pharmaceutical-grade opioids was tightened, making them less accessible. “After the adoption of this law, many consumers began to substitute pharmaceuticals with heroin”, Giménez explained.

This has led to a booming heroin market. Marijuana crops were replaced with poppy fields, which have become much more profitable.

“Another reason why the opium poppy gained ground in Mexico was the regulation of the cannabis market in the United States. As soon as the US no longer needed illegal supplies, they stopped buying from Mexico”, said the researcher.

The monitoring of illegal crops by the UNDOC shows that currently, the largest opium poppy producers in Mexico are Sinaloa, Chihuahua, Durango, Nayarit, Jalisco, Michoacán, Guerrero, and Oaxaca states.

“Opium poppy for many farmers is the main crop they grow. But it is a dangerous job because it is done secretly. Cultivation of this crop is punishable by imprisonment. At the same time, the illegality of this business has caused an increase in violence due to trafficking route disputes”, Giménez explained.

In August 2018, the Congress of the state of Guerrero, the subject of the federation with the highest opium production in Mexico, approved a bill to regulate the cultivation of the opium poppy. In order for it to come into force, it must go through a process of review, amendment and approval by the federal legislature.

"Discussions have been initiated and are taking place in the context of the Supreme Court ruling in favour of the cultivation and consumption of marijuana for recreational purposes'', said the researcher.

But parliamentary obstacles are not the only ones preventing legalisation on opium poppy cultivation. Growing the crop in secrecy also serves the interests of drug cartels.

"Illegal business brings more profit. It is a little naive to think that a mere regulation will reduce the level of violence in this market. What it can do, is help integrate farmers working illegally, into the market that exists within the regulatory framework", the researcher concluded.