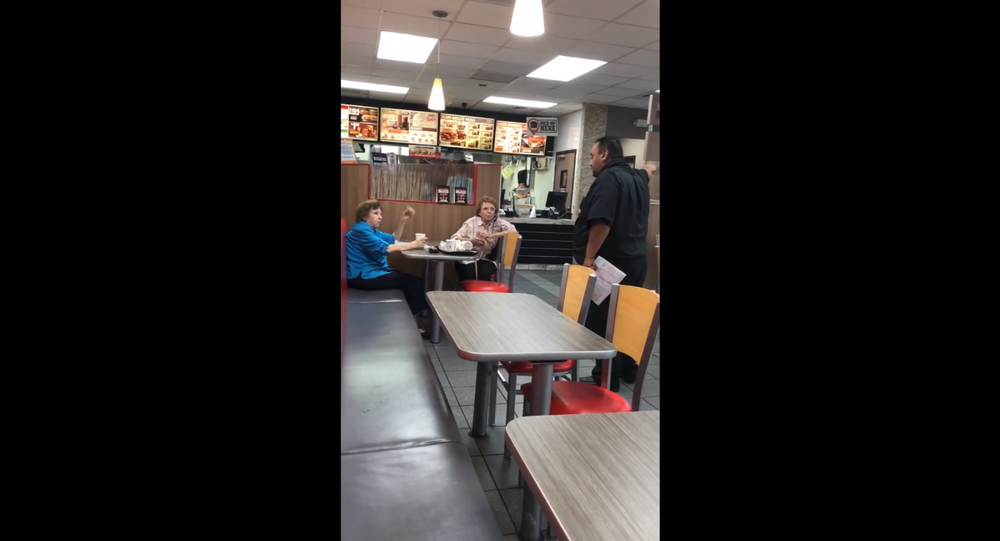 Video of the July 6 incident, which was filmed and shared on Facebook by Neyzha Borrero, shows the two women arguing with Ricardo Castillo, the eatery’s general manager, about how “this is America” and that as such, Spanish-speakers need to do away with their native tongue.

Local media reports suggest that the dispute erupted after Castillo approached the women, believing them to be upset about their meal. However, things quickly unraveled after the pair told the manager that the employees needed to drop the Spanish in public.

“This is America, our main language is English,” one of the women says to Castillo. “Speak your Mexican at home. This is still America.”

“When you’re in America, you should speak American English … Go back to Mexico if you want to keep speaking Spanish. Go back to your Mexican country, your state, your country,” she adds.

With the unidentified woman continuing on with her tired “You Must Speak English Only” speech, Castillo eventually decides to drop a little knowledge on the duo before ordering both to leave the restaurant.

“Guess what, ma’am. I’m not Mexican,” Castillo, who is Puerto Rican, said. “I’m not Mexican, but you’re being very prejudiced, and I want you out of my restaurant right now.”

When the blue-shirt-wearing woman states that she’ll leave once she’s done eating, Castillo informs her that he intends to call the cops. He later makes a remark that the pair are “very ignorant.”

“We aren’t ignorant,” the second woman says. She follows up the statement by declaring that the eatery doesn’t belong to Castillo after he politely asks them to “leave my restaurant.”

“This isn’t your restaurant. It is not. No it’s not. You don't know how to act around other people,” she adds before her partner chimes in, saying, “You won’t ever see us in here again.”

Borrero told the Palm Beach Post that she and her boyfriend, Oni Martinez, who is seen in the recording, have encountered similar attitudes before on multiple occasions. “Nobody should been discriminated [against] because they speak another language … Talking another language is something to feel proud of,” she said.

In a statement to local station Fox 35, Burger King stated that the incident is being investigated  by the franchise owner. “There is no place for discrimination in our restaurants,” it reads.