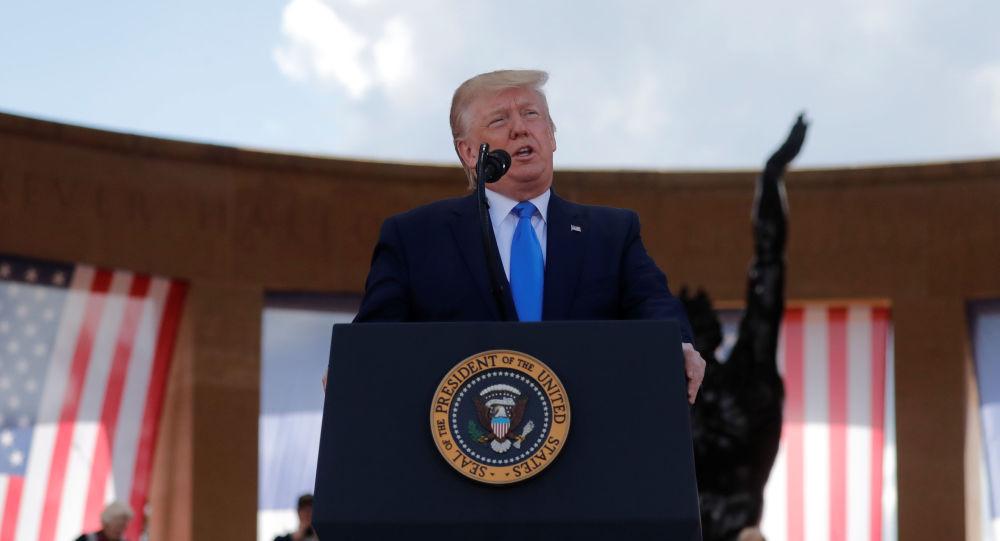 The 6 June commemoration of the grand 1944 landing operation by Allied forces in Normandy drew thousands of attendees, including the French and US presidents, along with their better halves.

A solemn ceremony marking the 75th anniversary of the D-Day invasion at Normandy was delayed while POTUS Donald Trump spoke with Fox News host Laura Ingraham, who accused the Democrats of using children as “pathetic political props” during a broadcast the previous day from a military cemetery in Normandy.

President Trump began his day in Normandy sitting for an interview with Laura Ingraham on Fox (pic from Host TV): pic.twitter.com/9RXZiEp57B

French television cameras spotted President Trump sitting down with Fox’s Laura Ingraham - fourteen minutes *after* the ceremony in Normandy was set to begin. Thousands of people waited as an announcement overhead came on, declaring the program would be delayed until 11:15a.

TV cameras recorded Trump and Ingraham’s talk, still in full swing 14 minutes after the ceremony, attended by thousands of people, was due to kick off, with the president scheduled to be the first to take the floor.
The delay and the reason for it could naturally not go unnoticed on Twitter, with netizens enthusiastically sharing the reports.

Trump at Normandy on 75th Anniversary of D-Day: “They saved freedom and then went home and showed what freedom is all about.”

Addressing the public at the 75th D-Day anniversary in Colleville-sur-Mer in Normandy, President Trump heaped praised on “our great veterans, allies and heroes of D-Day”.

“You are among the very greatest Americans who will ever live. You are the pride of our nation. You are the glory of our republic", Trump said, paying tribute to the veterans.

The Normandy landings were conducted on Tuesday, 6 June 1944 commencing the allied invasion of France in Operation Overlord, which marked the opening of the second war front during World War II. Codenamed Operation Neptune and often referred to as D-Day, it went down in history as the largest seaborne invasion ever undertaken.