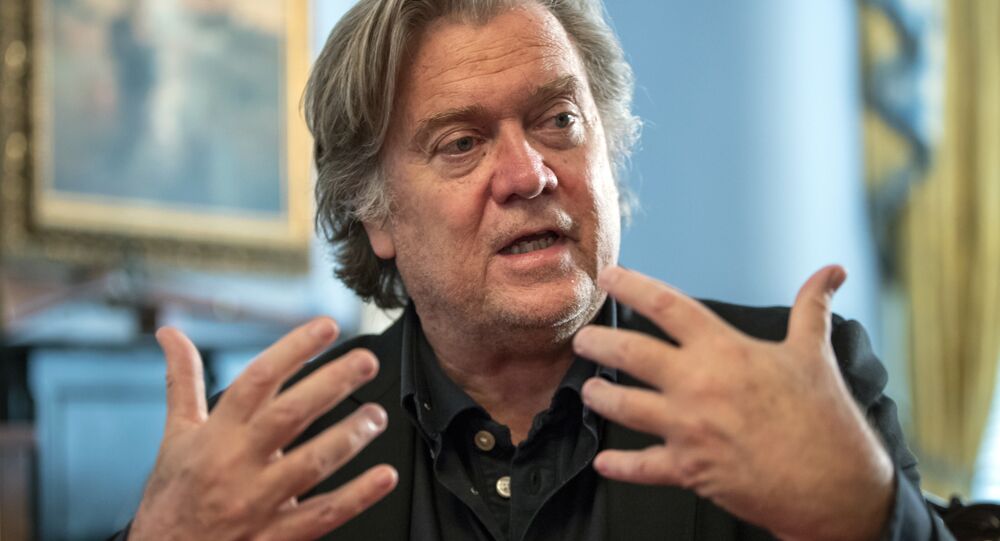 Former White House chief strategist Stephen Bannon said in a new interview that President Trump should continue to put pressure on China's economy with tariffs, accusing Beijing of waging "economic war" on the US.

Bannon told Bloomberg that it is the US's job to cut China out of every major market to put pressure on the Chinese government to bow to US demands on trade practices like intellectual property theft.

Bannon suggested that Trump’s ultimate aim is to fundamentally restructure China's economy so that it can do business with the US and other western nations.

"I don’t think Trump backs off for a second from the dispute, which is about fundamentally changing the Chinese economy so they can work with the free market economies of the West," Bannon told Bloomberg.

Bannon’s remarks came just a day after the president indicated that a trade agreement with China was unlikely to come in the near future, despite months of negotiations between the world’s two largest economies.

"I think they probably wish they made the deal that they had on the table before they tried to renegotiate it. We're not ready to make a deal. And we're taking in tens of billions of dollars of tariffs, and that number could go up very, very substantially, very easily," Trump said on Monday.

© REUTERS / Edgar Su
Microsoft WARNS US Crackdown on China's Huawei Could Backfire
The US and China have been embroiled in a trade dispute since last June when Trump moved to impose 25 percent tariffs on $50 billion worth of Chinese goods. Since then, the two economic powers have exchanged several rounds of new trade duties. The latest round of US-China trade negotiations ended in Washington DC in May, failing to produce any results. The White House, in turn, introduced a new set of tariffs on $200 billion worth of Chinese goods, with Beijing pledging to retaliate against the move.
...
Reddit
Google+
Blogger
Pinterest
StumbleUpon
Telegram
WhatsApp
226