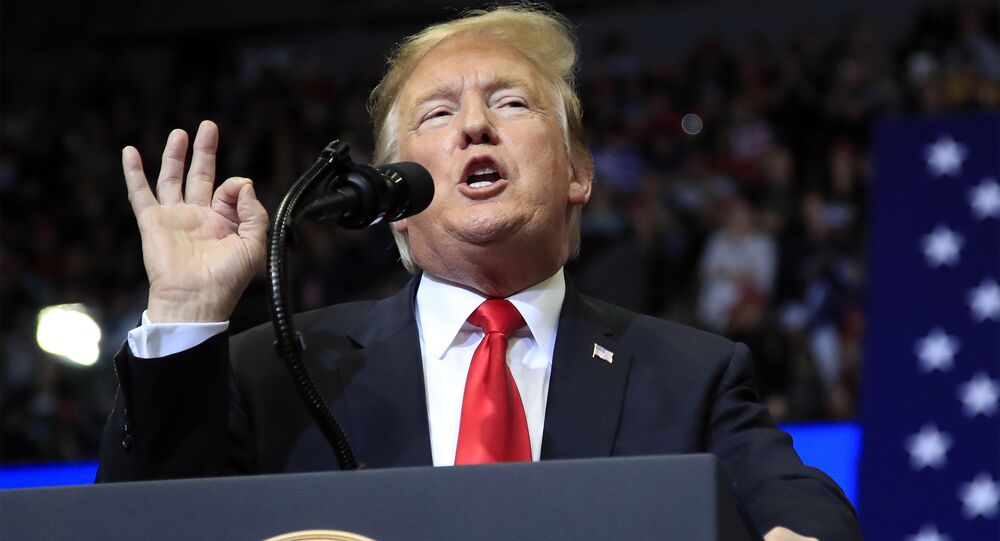 Earlier on Wednesday House Democrats gathered for a special meeting, initiated by House Speaker Nancy Pelosi, to discuss the status of House investigations into Trump's administration and to debate the impeachment option.

House Representative Frederica Wilson (D-Fla.) suggested on Wednesday that US president Donald Trump would drag the country into war with Iran as he "thinks we're going to impeach him… And we all know that if we are at war, the American people would not agree that you should be impeaching a president," The Hill reported.

With this in mind, Wilson provided insight into the logic that she believes Trump would follow were Americans to side with Democrats and if impeachment were to loom over his head.

"I believe he sees the fence, the walls closing in, that we're circling the wagons, and the circle is getting smaller and smaller. And he thinks we're going to impeach him," Wilson said in an interview with The Hill. "If he sees the impeachment movement getting too close and too popular, and the American people beginning to side with the Democrats in the House of Representatives, then he will take us to war."

Wilson reinforced her thesis by briefly describing what a war would look like with Iran.

"I think he's squeezing Iran with sanctions, and he's sending warships to intimidate them, to sort of aggravate them, and to cause them to react-he's like a bully. He's bullying them to the point where he wants to go to war," Wilson said. "So just think about it: Now we're at war with Iran. Everybody is afraid of Iran. We have Israel over there at risk due to this war with Iran. The whole Middle East is in turmoil. And we are impeaching a president?" "That's Trump's safety net," she said.

At the end of the interview, Wilson once again expressed concern that an impeachment procedure could lead to unexpected actions by Trump, including "the war scenario" since the US president is "unstable" and "would do anything."

"I'm nervous…. What I just told you has me shaking in my boots, and I'm just wondering, am I the only person who feels this way?" she said.

US Air Force; Tech. Sgt. Robert J. Horstman
Seeking Dialogue? Iranian Official Says US Inflames War Against Iran With THIS MOVE
The congresswoman's comments come amidst rising tensions between the US and Iran. Washington, following the country's withdrawal from the Joint Comprehensive Plan of Action (JCPOA), also known as the nuclear deal, re-imposed all sanctions against Tehran, while significantly scaling up pressure against the Islamic Republic.

Besides designating the Islamic Revolutionary Guard Corps as a foreign terrorist organization, (Tehran reciprocated by designating US Central Command as terrorists), the US has deployed a carrier strike group and a bomber task force to the Middle East and sent more MIM-104 Patriot missile defence systems to the region.

READ MORE: Revolutionary Guards Gen: US & Allies 'Do Not Dare' to Attack Iran

Reacting to these actions by the US, Tehran announced its decision to partially discontinue its obligations under the nuclear agreement.Donald Trump, while noting recently that he doesn't seek war with Iran, said that the US would respond to Iranian actions with "great force."

Iranian Supreme Leader Ali Khamenei said on 14 May that the country would continue resisting the US, but stressed that there would be no war between the two states.

UK Warns Iran of US Retaliation if Washington's Interests 'Attacked'