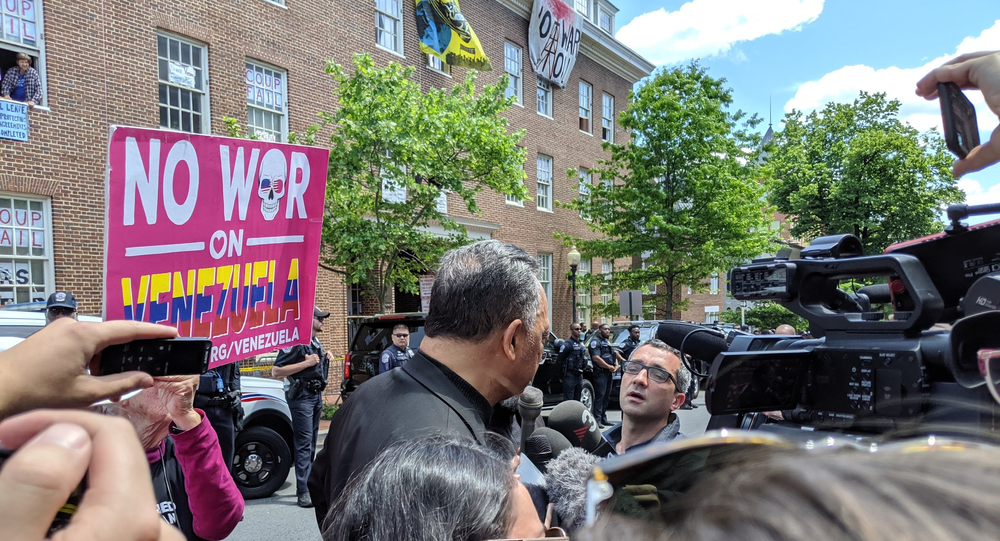 Police have been sieging the Venezuelan Embassy in Washington, DC despite resistance from activists supporting the diplomatic mission loyal to the country's elected President Nicolas Maduro and accusations of violating the untouchable status of the embassy.

US police have broken into the Venezuelan Embassy in Washington, DC and arrested four protesters from the Embassy Protection Collective at the request of Venezuelan opposition leader Juan Guaido's representative in the US — Carlos Vecchio, the State Department said. The four anti-war activists who were arrested during the raid, Margaret Flowers, Adrienne Pine, David Paul and Kevin Zeese, were removed from the embassy soon after and taken away in a police car.

The lawyer of the arrested activists stated that they are likely to face charges for Interference With Protective Mission.

A US Secret Service spokesman confirmed that it had helped Department of State's Diplomatic Security arrest the remaining Embassy Protection Collective protesters inside the Venezuelan Embassy.

"This morning, US Secret Service Uniformed Division Officers assisted US Department of State Diplomatic Security Service Special Agents in executing federal arrests warrants against individuals who were inside the Venezuelan Embassy", the Secret Service statement said.

Anti-war group CODEPINK's activists reported that the lawyer for Embassy Protection Collective was seen entering the building escorted by the DC police. Medea Benjamin from CODEPINK cited Venezuela's Deputy Foreign Minister Carlos Ron as denouncing the US actions as a violation of the Vienna Conventions and slamming the arrest of Embassy Protection Collective members.

"We call on the US government to sign a Protecting Power Agreement to ensure the integrity of our Embassy in DC and the US Embassy in Caracas. We do not authorise any of the coup representatives to enter the Embassy", he was quoted as saying by the CODEPINK activist.

The press and a handful of activists have converged at the back of the building on 29th St. This is where a walkway to the back courtyard and the underground garage lead. Consensus seems to be police may bring any detainees out this way. Street is blocked. #VenezuelaEmbassy #DC pic.twitter.com/mpiBBGgwy8

CODEPINK activists' reports were later confirmed by a Washington Post reporter on the scene, who heard one of the protesters guarding the embassy call out a window that police are after them. The reporter spotted an ambulance approaching the embassy's garage and paramedics rolling out stretchers. So far, no injuries have been reported among the protesters.

Antiwar and #climate activists @KBZeese and Margaret Flowers and two other people opposed to the Trump administration's policies on Venezuela have been arrested by police who entered the Venezuelan embassy in violation of the Vienna Convention. pic.twitter.com/HbqIEBGqay

© Photo : YouTube/alchymediatv
Venezuelan President Maduro Calls for Preserving Inviolability of Embassy in US

The activists from the Embassy Protection Collective have been living inside the embassy since 10 April in a bid to protect it from US attempts to seize the facility and hand it over to supporters of Venezuelan opposition leader Juan Guaido. The group was invited by the embassy's Venezuelan diplomats, who were forced to leave US soil.

Venezuelan President Nicolas Maduro earlier slammed US attempts to seize the property of the country's embassy, pointing to its "inviolability" under international treaties regulating the activities of diplomatic missions.

Relations between the US and Venezuela have been spiralling downward since Washington recognised Juan Guaido's claim to be the Latin American state's interim president and supported his aspirations to oust democratically elected President Maduro. The latter has slammed Guaido as a "US-puppet" attempting to conduct a coup in Venezuela.