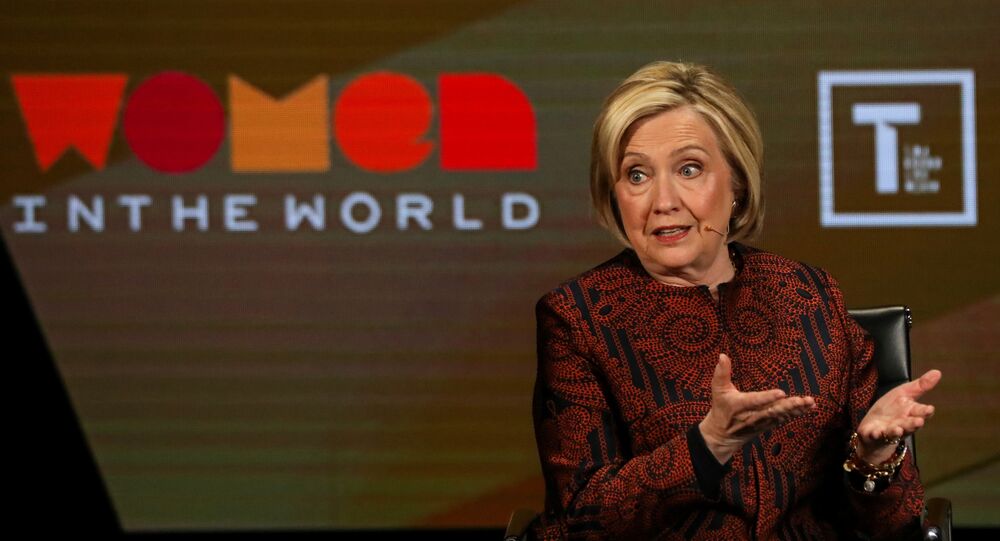 The cult, which was exposed last year, reportedly sought political favours from the former presidential hopeful and for that purpose came up with a scheme to overcome limitations on campaign contributions.

Clare Bronfman, an heir to the billionaire philanthropist Edgar Bronfman and a benefactor to the NXIVM marketing company, which is considered by US authorities to be a cover for a sex cult, conducted an illegal fundraising campaign in support of Democratic presidential candidate Hillary Clinton in 2008, the New York Post reported, citing testimonies of former cult member Mark Vicente.

Vicente claimed that Bronfman had sought to "curry favour" with the prominent political candidate by raising a significant sum for her 2008 campaign, which turned out to be unsuccessful. According to him, the cult's benefactor would approach people in NXIVM and ask them to make donations, which she later compensated, in order to overcome the legal limitations on campaign contributions.

"There was a strong desire to meet people within politics", Vicente said.

The former cult member stated that he donated between $2,000 and $3,000, failing to name the exact amount. According to records obtained by the media outlet, NXIVM members and their families accumulated $29,000 in donations in 2008.

40-year-old Bronfman spent her fortune supporting the NXIVM "cult", which involved sex trafficking and racketeering, and pleaded guilty in April on accusations of conspiracy to conceal and harbour an illegal alien for financial gain and fraudulent use of identification. The "cult" is believed by authorities to have been a cover for the so-called "DOS" or "The Vow" secret society, where women were forced into sexual slavery, mostly serving the needs of NXIVM head, Keith Raniere.

In 2017, information about the sex cult started to appear in the media, and in 2018 US authorities arrested a number of its prominent members, including Raniere, Bronfman, and Smallville series actress Allison Mack, who was accused of sex trafficking, luring women into DOS and branding them. Most of the arrested, other than Raniere, pleaded guilty to their respective accusations.

Hillary Clinton's 2008 presidential campaign ended in a fundraising scandal, when US media uncovered that a major campaign contributor to the candidate, Norman Hsu, was a long-time fugitive and fraudster. Clinton had to donate all of Hsu's personal donations to charity and refund donations to the donors. Although her team managed to minimise the damage, Clinton nonetheless lost the primaries to another Democratic candidate — Barack Obama.