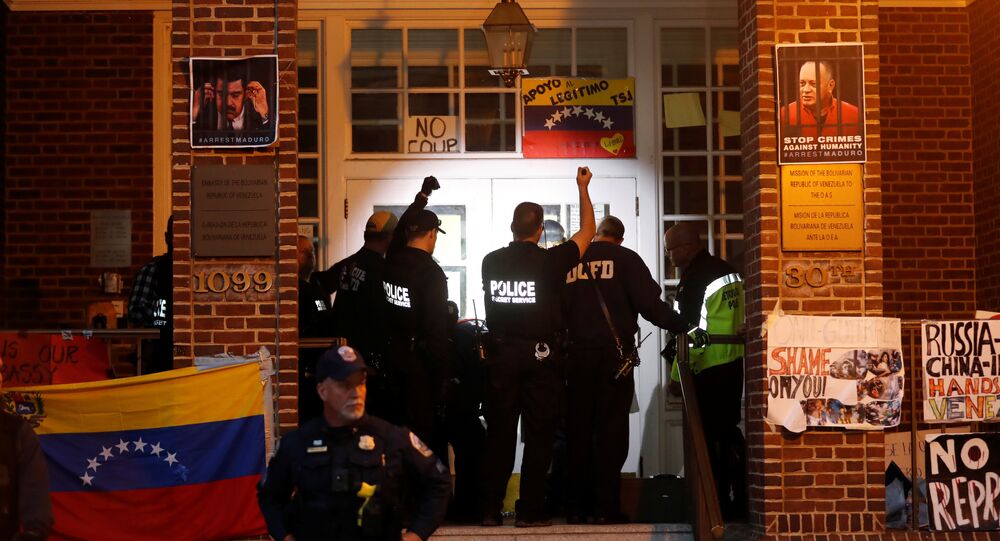 After a standoff lasting more than a month, US police have elected to end the siege of the Venezuelan Embassy in Washington, DC, by declaring the Embassy Protection Collective to be tresspassers who must leave the property, and subsequently conducting a raid of the facility.

The collective is comprised of group of anti-war protesters from organizations including Code Pink, Act Now to Stop War and End Racism (ANSWER) Coalition, Popular Resistance, and the Black Alliance for Peace, who said they believed the embassy falling into opposition hands would precipitate a war between the US and Venezuela and set a dangerous precedent elsewhere in the hemisphere for other diplomatic offices to be similarly disrespected.

BREAKING: US Marshalls about to illegally seize Embassy of Venezuela and hand over to US-backed ambassadors of Guaido in violation of international law #EmbassyProtectionCollective members may be arrested https://t.co/z0NlwOvIsJ

​Immediately prior to the raid, US Marshals cut the chains and locks placed on the front door by the exiting Venezuelan diplomats several weeks ago, and placed a notice to vacate on the front door of the embassy, located in Washington, DC's historic Georgetown district.

"This property is used for official business and diplomatic purposes. The United States of America recognizes Ambassadors Vecchio and Tarre as the representatives of Venezuela with lawful control over the property," the letter reads, which wasn't delivered on an kind of official letterhead. "Accordingly, the United States does not recognize the authority of the former Maduro regime, or any of its former representatives, to allow and individuals to lawfully enter, remain on this property, or take any other action with respect to this property."

"Ambassadors Vecchio and Tarre have requested and directed anyone who is present on this property to depart from it immediately, and to not return without these ambassadors' express authorization," the notice continues. "Any person who refuses to comply with these requests and orders to depart from this property will be trespassing in violation of federal and District of Columbia law and may be arrested or criminally prosecuted."

However, after raiding the facility, the US authorities haven't made any arrests of the activists, left the building and locked the doors with a zip-ties, according to a Sputnik correspondent.

“Police, who had cut the chains on the front door, seem to have back out. They have stepped back, they put the ties back to the front door, the people are still inside [the embassy] … They have not been arrested. That is confirmed,” Brian Becker, director of the ANSWER group, told Sputnik.

Meanwhile, the office of the Venezuelan vice president described the US authorities’ intrusion in the country’s embassy in the United States as a violation of the international law.

“The US authorities have violated the international law by intruding into the Venezuelan Embassy in the United States without authorization of the Bolivarian government and President Nicolas Maduro,” the vice president’s office wrote on its Twitter page on Monday.

Earlier, amid multiple announcements by US Marshals to vacate the facility, collective members remained defiant, waving their fists in the windows and chanting with the crowd in sympathy across the street.​ It's estimated roughly half a dozen people remain inside.

With the raid imminent, the collective posted a final message on Twitter via Alexander Rubinstein, a journalist from MintPress News who's been embedded with the collective for weeks:

A final message from the Venezuelan Embassy Protection Collective as police prepare to unlawfully raid the building pic.twitter.com/CL1qLVARlg

"We are prepared to be arrested," the collective members said, noting they cannot comply with an unlawful order. "This fight is not over, US imperialism is going to fall, and we're going to do everything we can to stop it."

Several collective members left the building amid police warnings to vacate, in accordance with plans previously drawn up by the collective, which had long prepared for the police raid, the activists told Sputnik.

​The US has recognized Carlos Vecchio and Gustavo Tarre as the legitimate representatives of the Venezuelan government in the US and at the Organization of American States, respectively, and the government of Juan Guaido.​ The US has recognized Guaido as the legitimate leader of Venezuela since January 23, although he has little following in the country and his three coups d'etat have all failed, and Nicolas Maduro remains president of the country. Maduro was elected in May 2018 by roughly two-thirds of voters.

The Embassy Protection Collective has lived in the embassy since April 10, ensuring that Guaido's diplomats cannot occupy the building and conduct diplomatic functions on behalf of a Venezuelan government that holds no power. Venezuelan Foreign Minister Jorge Arreaza, and other leaders in Caracas have made clear the collective members are the guests of the Venezuelan government.

The activists argued that their tenancy in the property is legal under international, US, and DC law, and that no US law enforcement official can remove them from the property, since its ownership is inviolable under the Vienna Convention of 1961.

Pro-Maduro protesters asked through megahorns how diplomacy could be conducted by Vecchio's staff without a Foreign Ministry back in Caracas to facilitate their actions, such as issuing visas or passports.

Pro-Guaido opposition demonstrators played the Venezuelan national anthem over loud speakers and chanted for the collective members to get out of their embassy.

When Guaido made his final putsch attempt on April 30, Venezuelan expatriates living in the US converged on the embassy in Washington, DC, and laid siege to the building, blocking the exits and not permitting food, water, or other supplies to enter, all while showering the collective members inside and protesters in support of the collective — and Maduro's government — with insults, slurs, and a cacophony of noisemakers.

Activists pointed out that the raid happened on the 34th anniversary of the 1985 bombing of the MOVE house in Philadelphia, Pennsylvania, by that city's police department. During the police raid on the house, which served as the headquarters of a black liberation collective, officers fired 10,000 rounds of ammunition at the building and dropped two one-pound bombs from a helicopter, sparking a fire that destroyed 65 houses, killing 11 people.