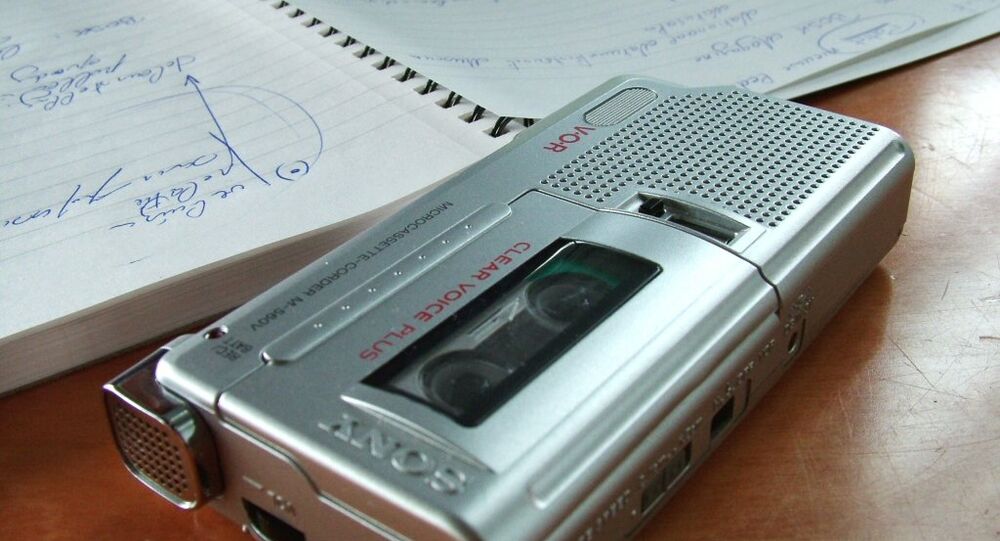 San Francisco police raided a freelance journalist’s home Friday, looking for a police report containing salacious details about a popular public defender’s death earlier this year. The report had been leaked to the journalist from inside the department.

At about 8 a.m. Friday, 10 officers from the San Francisco Police Department arrived at the home of freelance reporter Brian Carmody to execute a search warrant for a "stolen or embezzled" police report leaked to Carmody earlier this year, bringing with them a sledgehammer to knock down Carmody's gate. The report, which he sold to three news stations, contained salacious details about the final hours of California Public Defender Jeff Adachi, who died on February 22.

Carmody wouldn't tell police who had leaked him the report or which three networks he'd sold the report to. "There's only two people on this planet who know who leaked this report," he told the Washington Post, "me and the guy who leaked it."

This is a screen grab from my surveillance system. pic.twitter.com/qEHc0lpzs4

​Adachi, whose 16 years as public defender earned him a reputation for exposing police misconduct, died from what was initially reported as a heart attack at the age of 59.

However, another story soon emerged. Two days after Adachi's death, on February 24, ABC 7 reported, based on a police report and photos it had obtained from an undisclosed source, that in the final hours of his life, Adachi had been with a woman other than his wife and that the apartment in which his body was found had "an unmade bed, empty bottles of alcohol, cannabis gummies, and two syringes that may have been left by paramedics."

The medical examiner's report, released in March, ruled Adachi's death an accident, caused by the combined effects of cocaine, alcohol and a pre-existing heart condition.

The San Francisco Board of Supervisors called on SFPD to investigate and hold accountable the source of the leak. Some have accused police themselves of being responsible for the leak, saying it was a final act of revenge on a public defender who exposed police misconduct, the Post noted.

Only last month was it revealed that an unidentified freelance reporter had allegedly sold the report to the media for $2,500 each, the San Francisco Examiner reported.

Then, two weeks ago, police knocked on Carmody's door to ask who his source was. He declined.

However, when they came back on May 10 with a warrant and a sledgehammer, they searched "my entire house from attic to garage," Carmody said, taking at least four tablets, seven computers, 10 hard drives, a dozen phones, two cameras, reporters' notebooks and a thumb drive, according to the San Francisco Chronicle.

They also found the police report in Carmody's safe.

"They treated me like I was some kind of drug dealer," Carmody told the Post, noting officers searched the house with guns drawn.

Carmody spent the next six hours in handcuffs being questioned by SFPD and two FBI agents in suits.

"I'm smart enough not to talk to federal agents, ever," he said. "I just kept saying ‘lawyer, lawyer, lawyer.'"

"The citizens and leaders of the City of San Francisco have demanded a complete and thorough investigation into this leak," a Friday statement by SFPD said, "and this action represents a step in the process of investigating a potential case of obstruction of justice along with the illegal distribution of confidential police material."

"The appropriate thing was to issue a subpoena, not a search warrant," he told the Washington Post.

Adachi's successor, Public Defender Mano Raju, told the Examiner he was "pleased" by police actions, saying, "All of our criminal justice and City Hall leaders agree that the release of police reports in this fashion is wrong."

"If the judge who signed the warrant in this case knew it was to search a reporter's home for materials from a confidential source, that judge needs to re-read the California Shield law," Boghosian said.

"The state's shield law is clear. Any person connected with a periodical publication or press association cannot be held in contempt for refusing to disclose the source of any information while he or she is connected with a publication, or for refusing to disclose any unpublished information obtained while preparing for communication to the public," the attorney noted.

"Law enforcement needs to be held accountable for this brazen break-in to restore confidence in the nation's appreciation of the value of news reporting and investigative journalism," Boghosian said. "Without an immediate check on police violation of the shield law, one can only wonder what news reporter will be searched next. Will police dare to march into the San Francisco Examiner office? Anyone who cares about truth in reporting should be outraged."