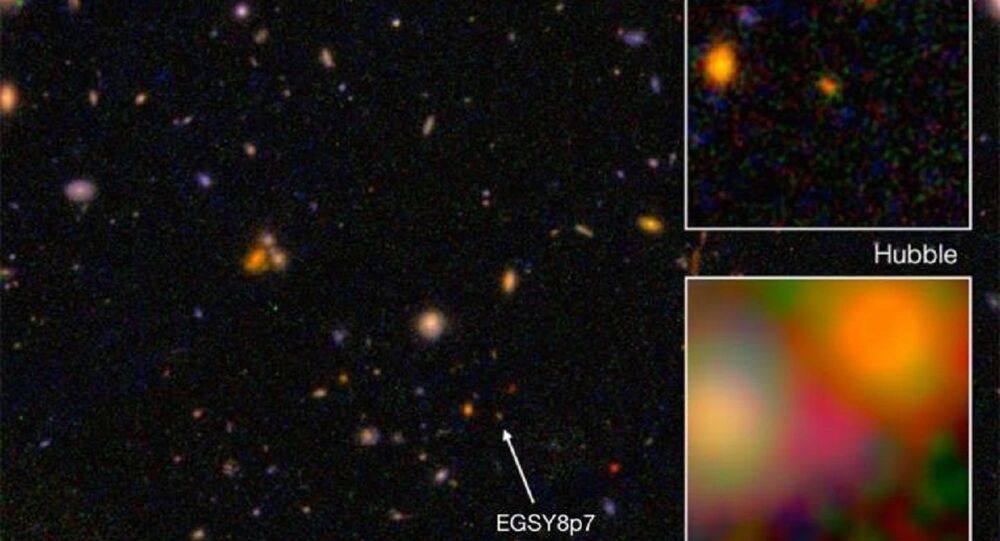 NASA's Spitzer space telescope has enabled astronomers to gaze back to the early universe, 13 billion years in the past, and find some of the very first galaxies.

New observations from NASA's Spitzer infrared space telescope have offered a significant clue towards unlocking the mystery of how starlight initially appeared.

The Universe as we know it today, glittering with light, was something completely different at its outset: dark and murky.  We don’t yet know what started exciting the hydrogen with radiation and ionising it – but that is ultimately what caused the first ultraviolet light to shine.

The observations from NASA's Spitzer telescope have just provided a pretty significant clue about one of the most important cosmic events in history: the "Epoch of Reionization," as it spied unusually luminous galaxies, like tiny glowing dots in a sea of darkness.

What is inside the red circles? Some of the universe's earliest galaxies detected by @NASAspitzer! They are found to be brighter than anticipated and as such helped to transform the universe. Find out more here: https://t.co/IvMrpFp0o9 pic.twitter.com/Uwa6bRjiFN

​To begin with, in the wake of the Big Bang, the Universe was a dark, 'primordial soup' on a cosmic scale, which was expanding rapidly, and as this happened, it cooled, causing protons and neutrons to start to combine into ionised hydrogen atoms. Around 240,000-300,000 years after the Big Bang, these hydrogen atoms attracted electrons, coalescing into neutral hydrogen.

Only after gravity started to pull together the first stars and galaxies did starlight appear.

One billion years after the Big Bang, the Universe was glittering with starlight.

The open question remained: how? With the neutral hydrogen in the Universe, it would have taken a huge amount of radiation to make light, and it's unclear just what might have produced such radiation, whether newborn stars could have been enough, or luminous galaxies…

Astronomer Stephane De Barros of the University of Geneva says the new findings could be a very significant clue, providing a possible answer to one of the biggest open questions in observational cosmology.

The research has been published in the Monthly Notices of the Royal Astronomical Society.

After staring at the sky for 200 hours, the Spitzer telescope spots 135 surprisingly bright galaxies from the early universe. pic.twitter.com/JbS834qK2o

Spitzer spent hundreds of hours in a special observation run, perusing two regions of the night sky, tasked with attempting to find clues. Over 13 billion light-years away, it observed 135 galaxies that were very different from those nearer to us.

The galaxies in the early Universe are poor in heavy elements, which are forged in explosive processes and therefore weren't around in huge amounts until a few generations of stars had run their life cycle and died.

Instead, these galaxies are dominated by young, hot stars mostly made of hydrogen and helium, and are particularly bright in two infrared wavelengths that are produced through the interaction of ionising radiation and hydrogen and oxygen gases.

It was these galaxies that could likely have contributed to the Epoch of Reionisation.

"Our latest Spitzer result reveals how different these early galaxies are to those at later times and pinpoints our sample as a key set for providing insights into how galaxies so efficiently reionised the Universe,"  said astronomer Garth Illingworth of UC Santa Cruz.

"These results by Spitzer are certainly another step in solving the mystery of cosmic reionisation," said astronomer Pascal Oesch of the University of Geneva.

"We now know that the physical conditions in these early galaxies were very different than in typical galaxies today. It will be the job of the James Webb Space Telescope to work out the detailed reasons why."

Space Image of the Day extra #3 😀This fantastic skyscape lies at the eastern edge of giant stellar nursery W5, about 7,000 light-years away in the constellation Cassiopeia. An infrared view from the Spitzer Space Telescope, it features interstellar clouds of cold gas and dust. pic.twitter.com/2FwyFKozdq