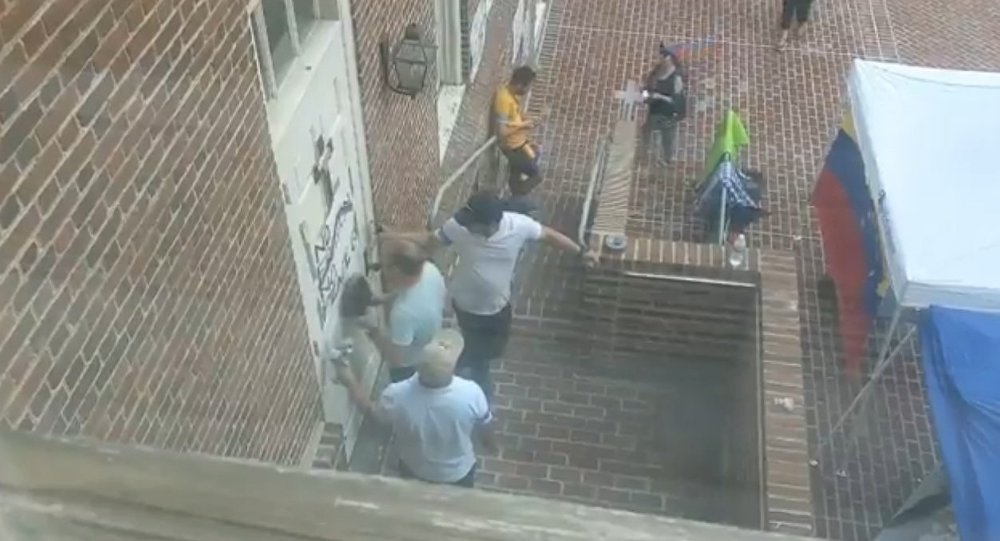 The supporters of opposition leader and self-proclaimed president of Venezuela Juan Guaido had been gathering outside the Venezuela embassy for several days, however, it seems that they have now taken action.

Videos show the protesters occupying the exits into the Venezuela embassy and trying to break in. Sputnik Journalist Morgan Artyukhina posted a series of videos of the protesters. In the videos they are shown gathered around the embassy, using flashlights to lure out the staff and beam into the faces of the crowd that gathered near the embassy to support legitimate president Nicolas Maduro.

They're flashing strobe lights in our faces. This is dangerous to people with epilepsy and spectrum disorders. The police, naturally, don't care even when they're 12 in. from our faces. pic.twitter.com/Z28nBwpyCF

Over a hundred opposition out here tonight trying to break into the embassy. Their favorite tactic tonight is spotlights and strobes in our faces. Police are doing nothing. pic.twitter.com/LRUVItSepD

Witnesses posted a series of videos showing the protesters trying to break into the embassy, breaking the doors which staff had to heavily barricade in order to defend themselves.

Outside #venezuela embassy in washington, venezuelans strike back at @codepink activists who occupied building a couple weeks ago at the request of pro maduro officials. The embassy has become a micro-cosm of the struggle being waged inside the country between gov & opposition pic.twitter.com/9qAth8yiCh

More from the oppositions who have been chanting "hands off our embassy." pic.twitter.com/3f8kRlFyhx

The opposition is still trying to break in from multiple entrances. Secret Service does nothing pic.twitter.com/ajJ57bW9pI

More from the oppositions who have been chanting "hands off our embassy." pic.twitter.com/3f8kRlFyhx

"Where's Kevin?" you can hear them shouting in this video pic.twitter.com/l8LAAPI2WA

So far the police have refused to arrest him despite me filing a report and giving witnesses WTF?!

Reporter, Alex Rubinstein, who apparently was inside the embassy, also posted a letter from the Partnership for Civil Justice Fund, urging the Washington DC Police Department, US Department of State and the Secret Service to prevent violent actions against the embassy and its staff. However, according to witnesses, no forces have been sent to the scene to control the protesters so far.

.@ThePCJF law firm has sent this letter to the @DCPoliceDept, @StateDept & @SecretService asking them to do something about the violent mob trying to break into the Venezuelan Embassy. The Embassy Protection Collective is asking for everyone to share it widely. pic.twitter.com/ScNslByLho

The situation around Venezuela has been intense since January when the country's opposition leader Juan Guaido illegally proclaimed himself the interim president and was immediately supported by the United States and its allies. Nicolas Maduro, in turn, was backed by multiple countries including Russia and China, as the only legitimate president of Venezuela.