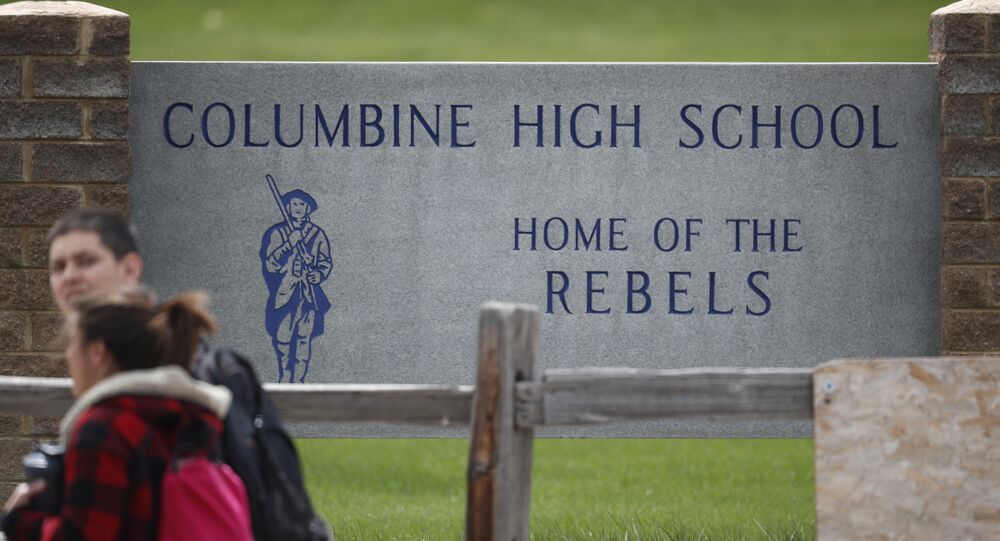 Numerous mass shootings have occurred in the US in recent years, spawning an array of suggestions about how to combat and prevent such violent episodes, ranging from stricter gun laws to arming school teachers. Sputnik has gathered facts about how the US has changed since the notorious mass shooting 20 years ago.

Columbine Mass Shooting: Why Is It Remembered to This Day?

Columbine High School seniors Eric Harris and Dylan Klebold entered the premises of their school on 20 April 1999 at around 11:00 am, planting several makeshift bombs at different locations and then opening fire on both students and teachers. Using their arsenal of illegally obtained weapons, which included a carbine, a semi-automatic pistol, and two shotguns, the two killed 12 students and a teacher, injuring 21 more. After around 40 minutes of carrying out the massacre, the attackers killed themselves.

The incident shocked American society for a number of reasons. There was no convincing explanation as to why the two carried out the attack. While the FBI put the blame on the perpetrators being mentally ill, not everyone found this version convincing, shifting the blame to rampant school bullying, social isolation, and the influence of subcultures, "dark music", and violent videogames.

Another shocking aspect of the case is how easily the two managed to obtain guns, asking an 18-year-old friend to buy most of their weapons for them. They also succeeded in getting hold of components needed to make several makeshift bombs, most of which, luckily, didn't go off. Local police were heavily criticised for failing to quickly respond to the active shooter scenario, entering the school building only after both Harris and Klebold had killed themselves.

© CC BY 2.0 / Elvert Barnes
School in US City of Baltimore on Lockdown After Shooting - Police

Despite the hard lessons of the Columbine High School shooting, the situation hasn't changed in the US over the last 20 years, with the number of active shooter scenarios in American schools rising rapidly. Around 241 school shootings have been registered over this period of time, leaving around 293 people dead, mostly students.

The frequency of shootings has also increased over time — around 60 cases were registered in the first 10 years following Columbine, while around 180 more over the following 10 years. The amount of casualties also doubled during the second decade after Harris and Klebold's crime when compared to the first.

Three of the school shootings that have taken place since Columbine have been even deadlier. In April 2007, Virginia Polytechnic Institute and State University student Seung-Hui Cho murdered 32 students and teachers using Glock 19 and Walther P22 pistols, subsequently committing suicide. The incident became the deadliest school shooting in US history.

The Sandy Hook Elementary School shooting in December 2012 and Stoneman Douglas High School shooting in February 2018 claimed the lives of 27 and 17 students and teachers respectively. The latest major shooting to shock the US took place on 18 May 2018, when a shooter killed 10 and injured 13 people at Santa Fe High School in Texas, once again sparking demands for the government to put an end to school massacres.

The latest mass shootings at schools have reignited the public and political debate around the existing gun laws in the US. While shooting survivors, their parents, and a significant portion of Democratic politicians support tighter gun control and laws, Republicans and the National Rifle Association (NRA) have argued that it wouldn't solve the problem, arguing that if perpetrators can't obtain guns legally, where they are registered and accounted for, they can always turn to the black market and obtain them illegally.

Instead, gun rights advocates, supported by US President Donald Trump, have proposed another solution — to arm volunteers from among teachers so they are able neutralise a shooter, or at least stall the person, until police arrive. The initiative has already received support in several states, but it has also spurred a wave of criticism from those opposing "bringing more guns to schools".

At the same time, some states and schools have rejected the so-called zero "tolerance policy" that was adopted after the Columbine tragedy and which allowed schools to impose restrictions on certain items on school grounds that could pose a threat to students, such as guns — even if they were in the possession of an armed guard or policeman. Santa Fe High School was among those institutions that allowed armed police officers to patrol the area, resulting in the May 2018 shooter being quickly confronted and neutralised, reducing the casualties in comparison to previous major incidents.

Despite all of these measures, school shootings continue to take place in the US, although most of them are not as deadly as the notorious Columbine massacre. Since the beginning of 2019, there have already been six such cases with one person killed and five people injured, while the heated debate on measures to prevent these incidents continues in American society.