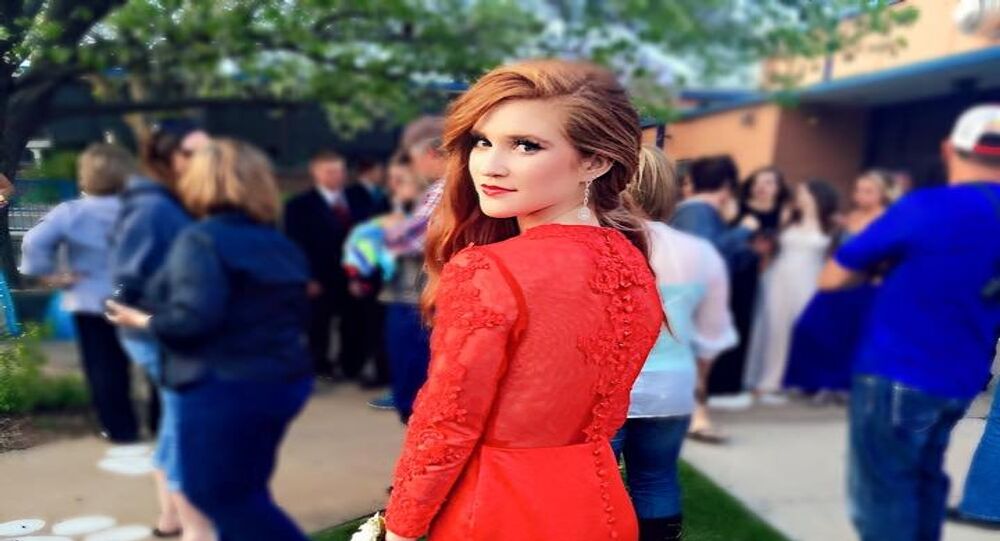 A 21-year-old model from Kansas was doing her daily duties on a 2,000-acre farm last December when she had a near-death experience involving one of her beloved cows.

Farm girl-turned-model Grace Peters was left with a severely broken arm and an open would that wouldn’t close for two weeks after a cow rammed into her from behind.

Grace, who was in charge of checking for new baby calves, feeding horses and hogs, and moving cattle around was moving the cows from one pen to another when the incident occurred.

“As I was chaining a gate so it would stay open, I suddenly got smashed from behind, I was shocked more than anything because I didn’t see it coming. My arm also just happened to be in a very bad position wedged in the panel as I got smashed and I instantly knew something was broke from the intense pain that dropped me to my knees”, she said.

Despite the unbearable pain, she managed to drive herself to the hospital where she was given X-rays that confirmed both bones in her left arm had been crushed.

“I sat there for a minute trying to catch my breath when the people up front started yelling for more cows. I felt the pain instantly, it was very sharp at first, but I was able to cope through it. I left my arm dangling by my side and it eventually went numb and only throbbed”, she added.

Grace underwent surgery, with doctors placing two metal plates in her forearm to keep the bones stabilised until they healed.

Two weeks later, doctors managed to close the incision with staples and stitches, but the problem was not entirely solved:

“When they tried to remove the stitches the wound split open to reveal my tendon again, so it ended up having to be redone. Now it’s all healed up and I have two gnarly scars on my left forearm”.

The horrific injuries, however, didn’t make her stop loving cows, although she now knows that they can be dangerous.

“If cows seem aggressive stay out of their way. Cows stand on their back legs first then front and they give a powerful kick. I still love cows. I think they’re powerful and majestic animals. I’ve always been aware that they can easily injure someone, and my arm proves that, but they didn’t injure me on purpose, I was just in the wrong place at the wrong time”.

Nonetheless, Grace has left the Kansas farm to pursue a career in modelling and acting in Los Angeles.

“Now it’s all behind me and I’ve just moved to LA to pursue my dreams of being a model and actress. I’m the farmer’s daughter you’ve never heard of. I was born and raised on a big farm in Kansas but my whole life I’ve dreamed of being in the entertainment industry. I love making people laugh and smile”.