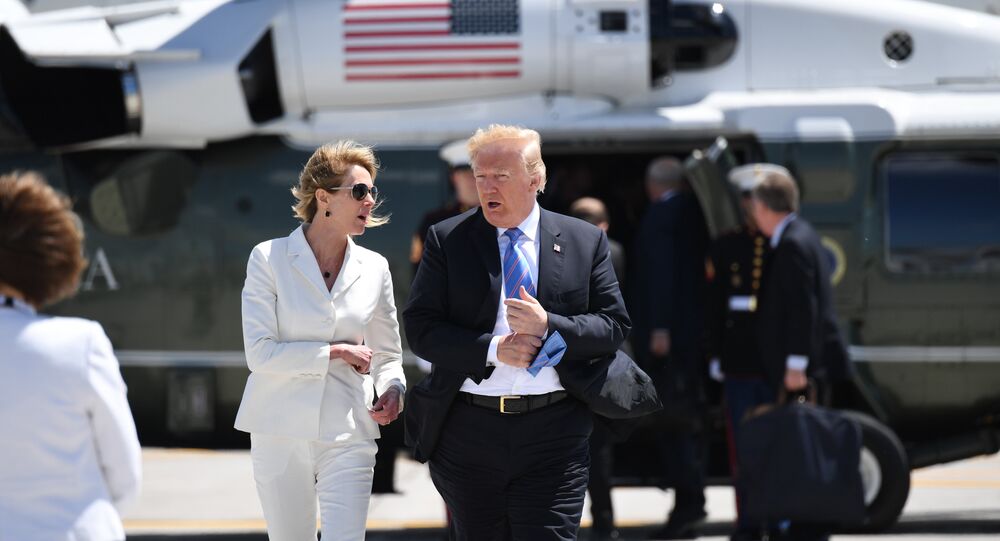 President Donald Trump announced in a Friday tweet that he was nominating Kelly Craft, US ambassador to Canada, to be the next envoy to the United Nations.

In a series of tweets on Friday, US President Donald Trump heaped praise on the country’s ambassador to Canada, Kelly Craft, whose nomination to the UN is yet to be confirmed by the Senate. Here are some key facts about the candidate, who may fill Nikki Haley’s shoes.

Kelly Knight Craft, born on 24 February 1962 in Glasgow, Kentucky, has been married three times and divorced twice. In 2016, she started a family with Joe Craft, a billionaire coal-mining executive for Alliance Resource Partners.

Prior to her job as US Ambassador to Canada, Craft headed Kelly G. Knight LLC, a Kentucky-based business advisory firm.

Generous Republican Donor With Background at the UN

Craft has been viewed as a major Republican donor: for instance, back in 2004, she was a vocal supporter of President George W. Bush, who tapped her as an alternate delegate to the United Nations three years later. As part of her job there, Craft focused on US engagement in Africa.

Before donating more than $2 million to the Trump campaign in 2016, Craft and her husband Joe were prominent supporters of Sen. Marco Rubio.

US Ambassador to Canada

In June 2017, President Trump nominated Craft as ambassador to Canada, with her candidacy being confirmed by the Senate two months later. Having assumed office in October, Craft became the first woman to be the US Ambassador to Canada.

Craft was tapped to represent the US in the United Nations one week after Trump’s first choice, former Fox News anchor and State Department Spokeswoman Heather Nauert withdrew her candidacy amid criticism that she lacked diplomatic experience.

I am pleased to announce that Kelly Knight Craft, our current Ambassador to Canada, is being nominated to be United States Ambassador to the United Nations….

….Kelly has done an outstanding job representing our Nation and I have no doubt that, under her leadership, our Country will be represented at the highest level. Congratulations to Kelly and her entire family!