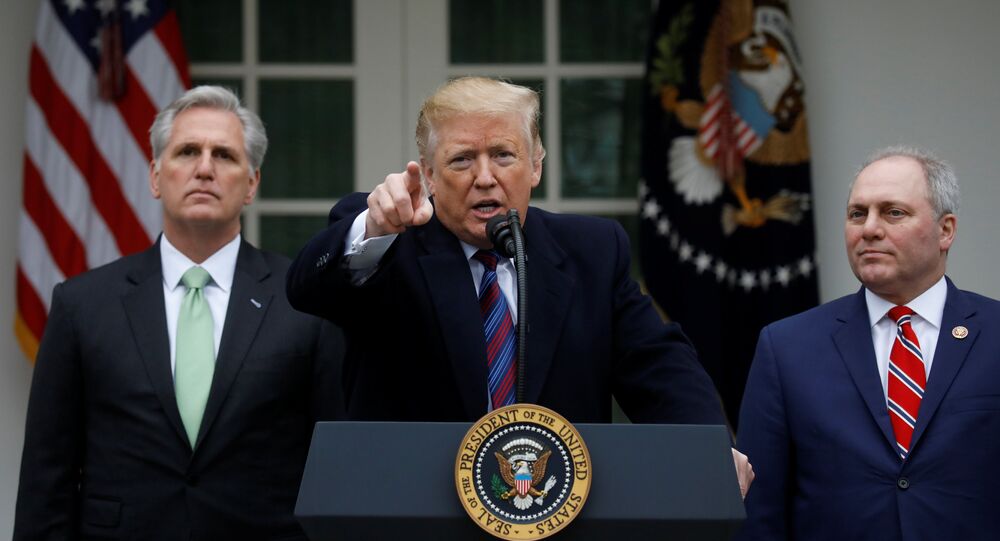 The US government remains shut down, with many agencies and departments not working or working without pay after Congressional Democrats and the White House failed to reach agreement on a budget for 2019. This is the longest shutdown in American history.

US President Donald Trump took to Twitter to slam the Democrats for refusing to discuss options that could end the ongoing government shutdown. He noted that while he is staying at the White House waiting for a continuation of negotiations, the Democrats are "are everywhere but Washington" and "having fun" while government employees are working without pay or are on furlough.

I’m in the White House, waiting. The Democrats are everywhere but Washington as people await their pay. They are having fun and not even talking!

Trump further argued for the efficiency of the wall that he wants to build on the southern US border, stating that it would reduce the crime rate in the country and halt the influx of illegal narcotics. He noted that the Democrats could solve all these problems and end the government shutdown by simply agreeing to include $5.7 billion in funding for the wall in the 2019 budget.

The US government entered its longest shutdown in the country's history on 21 December after the Senate failed to vote for the 2019 budget. The bill needed the support of several Democrats, who have refused to give their votes as long as funding for the construction of a wall on the southern border it is included. Trump has insisted on funding for the wall, stating that he wouldn't sign a budget bill without the funding, even if it is passed by Congress.

READ MORE: What Is the US Government Shutdown and What Can Be Done in Washington to End It?

The most recent meetings between the US president and Democratic leaders have failed to yield any results, as both sides are blaming each other for their unwillingness to cooperate. Trump called a meeting on 9 January a "waste of time" and warned Nancy Pelosi and Chuck Schumer that there would be no deal without a border wall.

Gov't Shutdown Continues; US Only Removes Equipment Not Troops From Syria