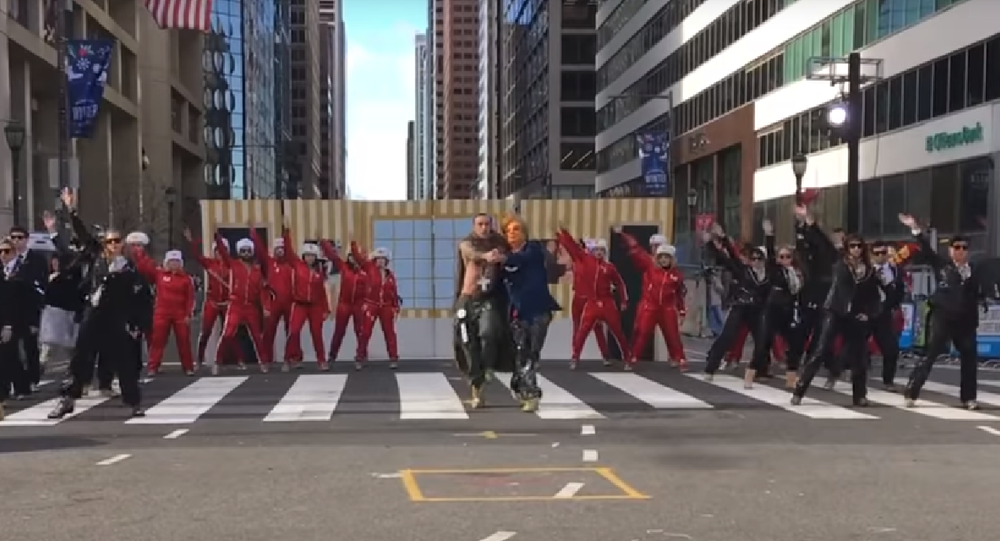 Philadelphia’s annual New Year's Day parade Tuesday featured a skit in which US President Donald Trump and Russian President Vladimir Putin fought it out over Uncle Sam and the infamous “pee tape.”

Pennsylvania's City of Brotherly Love has been putting on its Mummers Parade on January 1 for 119 years, featuring dancers, musicians and performers doing skits almost as outrageous as their costumes. Over 10,000 people marched in the nine-hour parade Tuesday, WPVI reported.

Raw Story notes that the parade sketches often focus on current events and pop culture, and this year the Lobster Club's act parodied the commander in chief himself, highlighting one of the biggest subjects of his presidency: Russiagate.

The sketch begins with a set based on the Oval Office, as dancers representing the Secret Service and the two major US political parties flank a dancing Trump, who emerges from his desk like a vampire from a coffin to strut his stuff to Madonna's 1985 hit "Material Girl."

Soon enough, of course, a shirtless, fur-clad Putin shows up, flanked by his own cadre of red tracksuit-clad dancers with white ushankas. Putin and Trump dance the tango for a moment, until Putin reveals his trump card: a giant VHS tape with the letter "P" on it!

Out here in the real world, the "pee tape" refers to a supposed recording of Trump in his pre-presidential days paying Russian sex workers to pee on a bed used by former US President Barack Obama in the Ritz-Carlton Hotel in Moscow. The tape was referenced in the dossier on Trump collected by former MI5 agent Christopher Steele, who postulated that Putin possessed the tape and intended to blackmail Trump with it.

While nobody's turned up the tape yet — and fewer and fewer people ever expect to — investigative journalist Ronan Farrow is reportedly hot on the trail.

Accordingly, the sketch plays out in a similar fashion. Soon enough, Lady Liberty, Lady Justice, and Uncle Sam appear, and Trump dances toward them until he grabs Uncle Sam and delivers him to Putin with a handshake in exchange for the P tape, which Trump places on his Oval Office desk.

As the Russians make off with Uncle Sam, the personification of America itself, Liberty and Justice have run off and soon return with Gritty, the mascot of the Philadelphia Flyers hockey team — and somehow also an icon of anti-fascist activists, who used his likeness as a rallying point against white supremacy in the city in 2018.

"This town only has room for one orange asshole," read a sign protesting Trump's October visit to the city.

Once Gritty appears on the scene, he, Liberty and Justice together take on the Russians, pulling Uncle Sam from their grasp. As the sketch ends, Trump is being hauled away by the FBI, the federal law enforcement bureau whose special counsel has been investigating alleged Russian collusion with Trump's 2016 election campaign for over two years, with little to nothing to show for it.