In one moment recalled by Comey, he described meeting Trump for the first time at the pre-inauguration intelligence briefing and noted that "his face appeared slightly orange with bright white half-moons under his eyes where I assumed he placed small tanning goggles, and impressively coiffed, bright blonde hair, which upon close inspection looked to be all his."

Comey added that "as he extended his hand, I made a mental note to check his size. It was smaller than mine, but did not seem unusually so."

After the meeting ended, Comey, who'd drawn the short straw the day prior, brought up the golden showers scandal. However, a week later, Comey wrote that Trump called him and was fixated on the dossier and that he was concerned about it being made public. 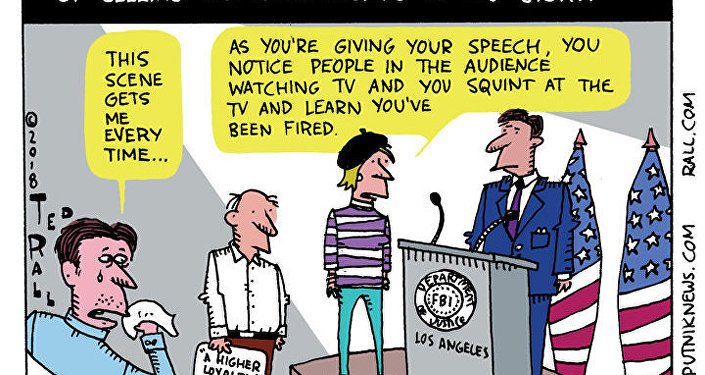 © Sputnik / Ted Rall
Comey to a Theater Near You?

During the call, POTUS, the president-elect at the time, continuously noted that the allegations were simply not true because he'd only used the hotel room to change his clothes and also because he'd never stayed overnight in Moscow.

"I decided not to tell him that the activity alleged did not seem to require either an overnight stay or even being in proximity to the participants," Comey wrote. "In fact, though I didn't know for sure, I imagined the presidential suite of the Ritz-Carlton in Moscow was large enough for a germaphobe to be at a safe distance from the activity."

But this wasn't the last time that Comey would have to deal with Trump repeatedly denying the golden showers fiasco. As The Washington Post reports, Trump brought it up at least three more times.

Trump shot down the allegations by claiming he was a germaphobe and that "there's no way I would let people pee on each other around me." Forty-five even went as far as bringing First Lady Melania Trump into the discussion by asking Comey what could be done to "lift the cloud" on the claims, which he noted are a painful topic for the first lady to handle.

"[Trump said] it bothered him if there was ‘even a one percent chance' his wife, Melania, thought it was true," Comey wrote, adding that Trump had asked him to consider investigating the matter to "prove it was a lie."

At that moment, Comey recalled feeling shocked and thinking: "why his wife would think there was any chance, even a small one, that he had been with prostitutes urinating on each other in a Moscow hotel room?" 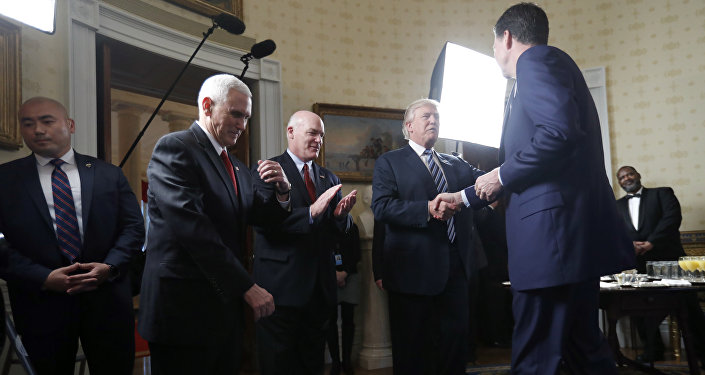 A week after Trump officially became the commander-in-chief, the two had a candlelit dinner in the Green Room, one which Comey labeled as an attempt "to establish a patronage relationship," the former FBI director stated. As the night drew on, Comey quoted Trump as saying that he needed and expected loyalty.

"I was determined not to give the president any hint of assent to this demand, so I gave silence instead," Comey wrote. "I stared at the soft white pouches under his expressionless blue eyes. I remember thinking in that moment that the president doesn't understand the FBI's role in American life."

Comey later wrote that his moments with Trump gave him "flashbacks to my earlier career as a prosecutor against the Mob."

"The silent circle of assent. The boss in completed control. The loyalty oaths. The us-versus-them worldwide," the 57-year-old recalled. "The lying about all things, large and small, in service to some code of loyalty that put the organization above morality and above the truth."

"What is happening now is not normal," he writes. "It is not fake news. It is not okay," he later detailed.

Aside from his puzzling interactions with Trump, Comey also discussed times when US Attorney General Jeff Sessions seemed "overwhelmed and overmatched by the job."

In one instance, Comey stated that he'd confronted Sessions after he'd followed Trump's orders to vacate the room.

"You can't be kicked out of the room so he can talk to me alone," Comey told Sessions. "You have to be between me and the president."

In response to the confrontation, Comey wrote, "Sessions just cast his eyes down at the table, and they darted quickly back and forth, side to side. He said nothing. I read in his posture and face a message that he would not be able to help me."

Since the excerpts were released, a firestorm has erupted on the Twitterverse.

​Comey's much-anticipated memoir is expected to hit bookshelves next Tuesday.