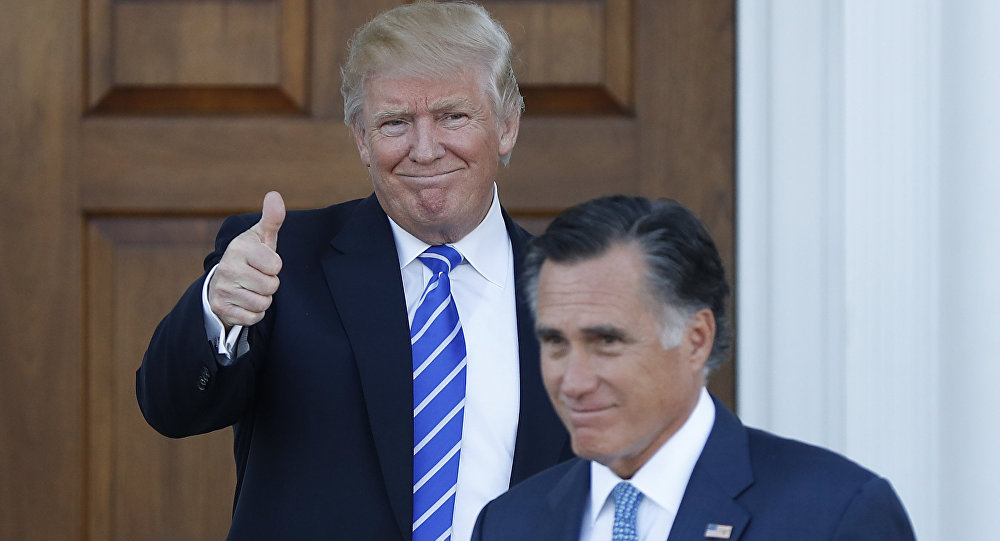 Donald Trump Schools Mitt Romney for Criticism of His Presidency

Mitt Romney has once again rebuked Trump's leadership skills, claiming the US president has made wrong personnel decisions and failed to reconcile the angered and divided nation.

Donald Trump hit back at Mitt Romney, the incoming US senator from Utah, after the latter chastised his leadership ability and said that he "has not risen to the mantle of the office".

"Here we go with Mitt Romney, but so fast!" Trump said on Wednesday. "Would much prefer that Mitt focus on border security and so many other things where he can be helpful. I won big, and he didn't. He should be happy for all Republicans. Be a team player and win!"

Mitt Romney entered 2019 with a fiery rant that cast doubt on Donald Trump's fitness and suitability to serve as the most senior politician in Washington.

"The Trump presidency made a deep descent in December," Romney wrote in an op-ed published in The Washington Post. It comes at a time when the federal government is partially shut down because Congress has not provided the financing Donald Trump asked for his promised US-Mexico border wall.

Romney called new staffers who entered the White House in December "senior persons of lesser experience." Specifically, he criticised the POTUS for replacing Defence Secretary Jim Mattis with his deputy, Patrick M. Shanahan, and White House Chief of Staff John Kelly with Director of the Office of Management and Budget Mick Mulvaney.

While praising Trump's early appointments, Romney lamented that Trump's 2016 campaign came down to "resentment and name-calling". He also claimed that Trump's "conduct over the past two years, particularly his actions this month, is evidence that the president has not risen to the mantle of the office".

The 2012 Republican presidential nominee blamed Donald Trump for failing to bring together a divided and resentful nation, and also slammed him for undermining the US' credibility across the globe.

Romney pledged to act, as a senator, as he would "with any president", disregarding party lines, but warned that he would oppose "divisive, racist, sexist, anti-immigrant, dishonest or destructive" statements and actions, in an apparent nod at Donald Trump's flamboyant rhetoric.

This speech, perhaps one of the most critical ones about Trump from a current GOP member, led political analyst and Fox News commentator Bill Kristol to brand it a sign of growing resistance to the 45th US president from within his own party.

For now at least Mitt Romney has become the leader of the Republican Resistance to Trump.

But we’ve been down this road with Mitt before. Remember his “Trump is a phony” speech in March 2016, followed in Feb 2018 by his “thanks” for Trump’s support? Could and should have disavowed Trump’s endorsement. Until he proves otherwise with his votes, he’s crying wolf again.

OR does he add his name to the long and not so distinguished list of GOPers who talk a good game and then fold like a cheap suit when it’s crunch time?

is he the kind man or is he? hypocrite he is on the same level of morality of Commey and others

Remember Romney was very critical of Trump, & then Trump won & called him in to interview for an Admin position. Mitt went in & kissed Donald's butt. But it was just a way for Trump to humiliate him. But it proved Romney has no spine. His words are as hollow as Trump's head.

During the 2016 Republican primaries, Romney advised his fellow party members against nominating Donald Trump. "Here's what I know: Donald Trump is a phoney, a fraud," Romney said in March 2016. "His promises are as worthless as a degree from Trump University. He's playing members of the American public for suckers. He gets a free ride to the White House, and all we get is a lousy hat".

Romney changed his mind about Trump later on, calling the then-president elect a "man who can lead the US to a better future", back in November 2016.