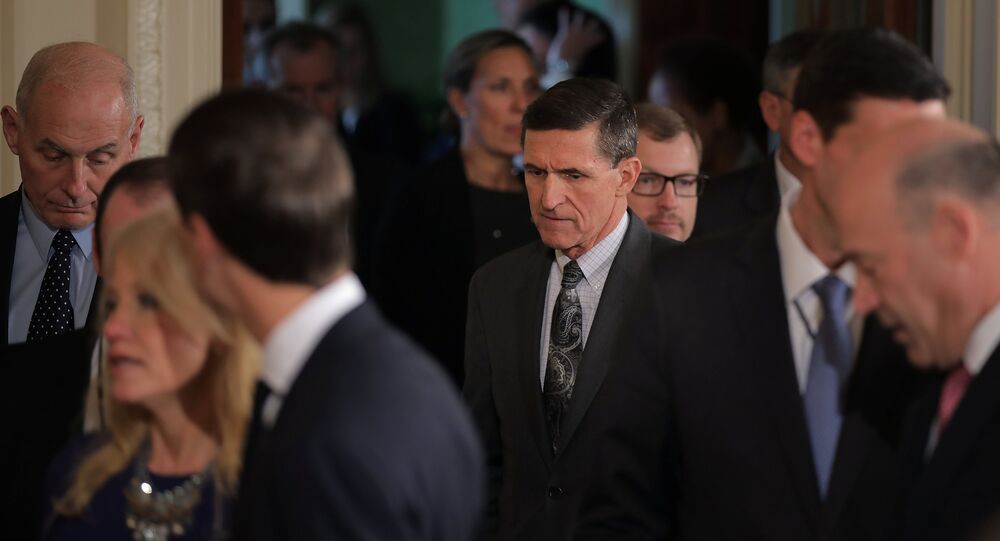 WASHINGTON (Sputnik) - Dozens of people are gathering in front of the US District Court for the District of Columbia to attend the sentencing of former National Security Advisor Michael Flynn, a Sputnik correspondent reports from the scene.

Numerous Michael Flynn supporters are present all around the courthouse carrying banners saying "Free Flynn" and "We Stand With Flynn," among others.

Representatives of media outlets are also present in large numbers.

Two hours before the sentencing, the line of people wishing to attend the hearing already extended outside the court building, while dozens remained to wait inside.

Earlier, Flynn pleaded guilty for lying to the FBI about his contacts with then Russian Ambassador to the United States Sergei Kislyak during the US presidential transition.

READ MORE: Russian Witch Hunt is a Fraud and Hoax That Should Be Ended Immediately — Trump

Flynn’s sentencing comes as part of Special Counsel Robert Mueller's investigation into allegations of Trump-Russia collusion and allegations of Russia’s meddling during the 2016 US presidential election.

Both Trump and Russian officials have repeatedly denied the allegations. Trump has called the investigation a political witch hunt that has not produced evidence of collusion in nearly two years. Russian officials have said the allegations were made up to excuse the loss of a presidential candidate as well as deflect public opinion from actual instances of election fraud and corruption.

© Photo : Pixabay
Two Years of Trump-Mueller ‘Bombshells’ But Still No Collusion
In a redacted addendum to the memorandum filed with the court earlier in December, Mueller’s office said Flynn provided firsthand information about the content and context of interactions between Trump’s transition team and Russian government officials.

In exchange for Flynn's substantial assistance in multiple investigations, Mueller's team recommended that he be given no sentence involving incarceration.

On Tuesday, Flynn's lawyers asked the judge to give their client probation not to exceed one year with minimal conditions of supervision and 200 hours of community service.

On the same day, former federal prosecutor George Parry wrote that Flynn’s meeting with Kislyak was entirely legal and legitimate under US law, and that even without cooperating with Mueller he was never in danger of going to prison under the federal sentencing guidelines.

As set forth in the defence sentencing memorandum, Perry said the FBI knew the exact words spoken by Flynn to Kislyak given that US intelligence intercepted and recorded the conversations, and had no real investigative purpose in having Flynn questioned about them except to frame him.

The intercepts gave the FBI a way to set a trap Flynn, who was then bankrupted as a result of being arrested and charged, Perry added.