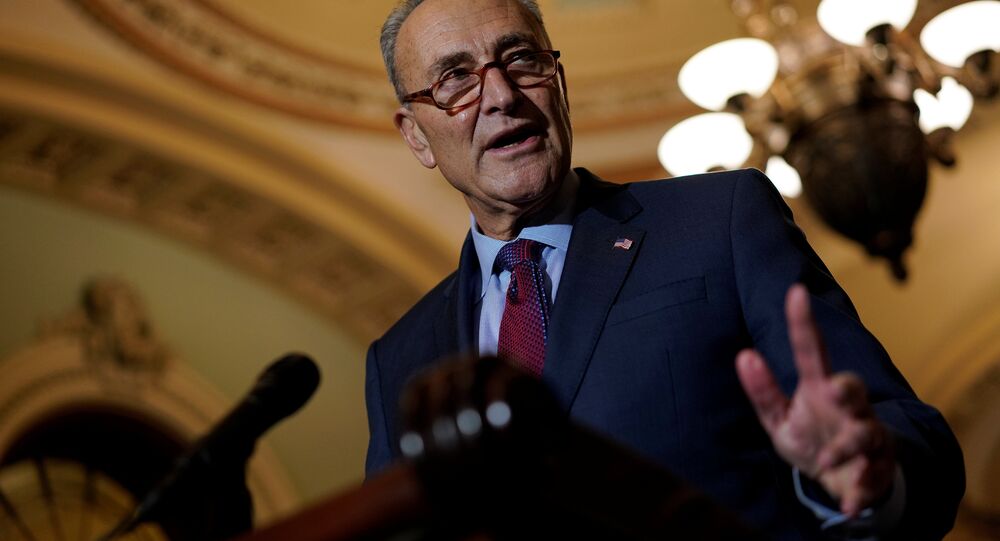 US President Donald Trump indicated that he wanted Democratic leaders to discuss possibilities for new US immigration regulations with him.

“If the Democrats would stop being obstructionists and come together, we could write up and agree to new immigration laws in less than one hour,” Trump tweeted on Saturday, implying that it could be more productive to cooperate rather than fight.

If the Democrats would stop being obstructionists and come together, we could write up and agree to new immigration laws in less than one hour. Look at the needless pain and suffering that they are causing. Look at the horrors taking place on the Border. Chuck & Nancy, call me!

Trump’s tweet came as a response to a joint statement by Senate Minority Leader Charles 'Chuck' Schumer (D-NY) and House Minority Leader Nancy Pelosi (D-CA) in which they noted that the US president and ranking Republicans are distracting attention from the deep problems posed by the US health care system. The Trump administration has consistently argued in court that protections for insurance buyers with pre-existing medical conditions provided for in the Affordable Care Act, aka ‘Obamacare’, be struck down.

“The president is desperate to change the subject from health care to immigration because he knows that health care is the number one issue Americans care about,” Pelosi and Schumer stated.

“Republicans in Washington are making a mess of our health care system, causing premiums to increase and care to decrease,” they noted in their joint statement.

© Sputnik / Katelyn Oaks
Trump Calls Democrats 'Too Dangerous' to Govern Amid Kavanaugh Confirmation
There are fears among Trump supporters that the US president might allow protection for so-called Dreamers – a group of hundreds of thousands of young immigrants to the US — in exchange for an estimated $25 billion required to construct a border wall with Mexico, the Hill reported.

“[The wall] is the biggest symbol of Trump. It’s something he really, really wants. And that’s our biggest fear, is that he’s going to give up amnesty to get a border wall,” said Chris Chmielenski, deputy director for the anti-immigration website NumbersUSA, cited by The Hill.

Trump’s rhetoric against immigration has escalated within the last month amid news that a caravan of 4,000 migrants from Central America could reach the US southern border.

During a rally for Republicans to vote in the upcoming November midterm elections, the US president repeatedly demanded that Mexico stop the caravan, threatening that he would use his executive powers to deploy the US military in what he claims are interests of national security.

Trump has also consistently blamed Democratic Party policies for the existence of the caravan.