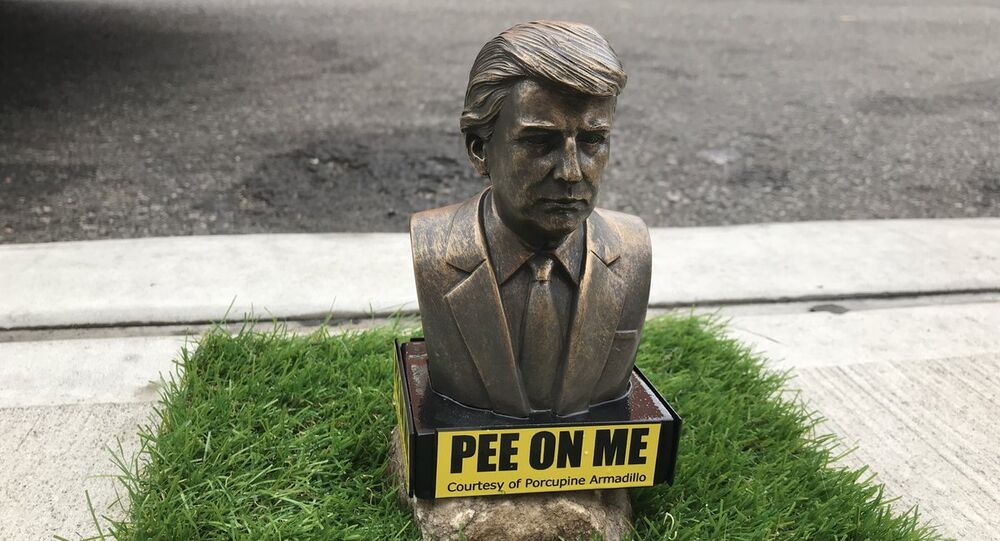 A New York City artist has come up with a novel way for residents of US President Donald Trump’s home city and their furry friends to express their everyday ire at the chief executive: small statues of The Donald set up on astroturf for pets to pee on.

© AP Photo / Ted Shaffrey
Journalist Ronan Farrow’s Got the Trump ‘N-Word’ Tapes - Report
While some may be holding out for investigative journalist Tom Arnold to disclose the "pee tape" of Trump he's been on the hunt for, New Yorkers and their pets can reenact it in their own backyard, if they so wish.

Local artist Phil Gable, who runs the brand content studio Porcupine Armadillo, has installed five busts of America's 45th president on squares of astroturf around the New York borough of Brooklyn, sprayed with a liberal coat of pet potty-training aid, creating a small urban dog park for pets to do their business, Gothamist reported on Monday.

​"It was partly a public service," Gable told Gothamist, playing it cool like he hadn't just set up pee stations depicting the country's leader around his hometown. "As a dog owner, I know people get understandably annoyed when dogs pee on their flower beds. But a dog's instinct to pee where another dog has previously peed is quite strong. They need positive places to pee. If you reward them enough for peeing in appropriate places, that's the best way to keep them from peeing in places that annoy people."

Gable told Vice News that the pee stations aren't just for pets: "There's nothing stopping you from joining in, too," the publication wrote Wednesday.

​"It was largely just a personal expression of my own disdain for Donald Trump, both as a president and a human being," Gable told the Gothamist. "I felt like this week was a particularly disturbing one in the ongoing sh*t show that is the 45th presidency, so it seemed like a good time to find a new, funny way to express the disgust that so many of us feel."

Tiny statues of #Trump with signs inviting dogs to 'pee on me' appear across Brooklyn NY! 😂🤦🏻‍♀️ pic.twitter.com/YGL8rPCC1E

© AP Photo / Carolyn Kaster
Hollow Trump Head Appears at Sydney Contemporary Art Show (PHOTOS)
Gable isn't alone in using art to criticize the real estate mogul-turned-reality-TV star who's now in the United States' highest office. An Australian art installation recently invited guests in Melbourne to use the hollowed-out inside of Trump's head (larger, of course, at least physically if not rhetorically) as a bus shelter, and statues of POTUS posing in the buff appeared in cities around the US following his election in late 2016.

"I know this isn't a grand gesture of protest. He's not going to hear about dogs peeing on a tiny statue of him and just say, 'That's it. Now, I'm stepping down,'" Gable said. "But everybody has their own way of dealing with things."