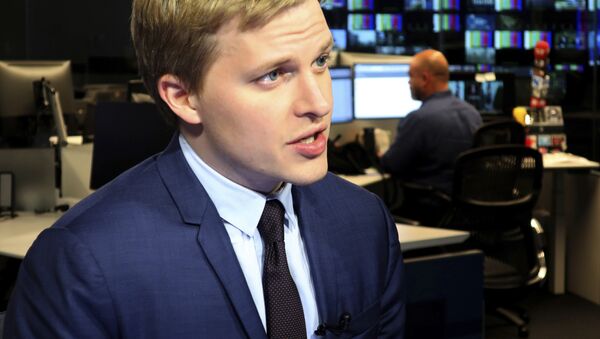 New Yorker writer and investigative journalist Ronan Farrow has reportedly and at long last come into possession of the infamous and long-sought tapes on which US President Donald Trump uses racial and bigoted slurs.

The tapes from Trump's reality TV show "The Apprentice" have been purported to exist since at least the 2016 election campaign. Talk of the tapes reemerged when excerpts from Omarosa Manigault Newman's tell-all book "Unhinged" surfaced in early August.

Omarosa, who made three appearances on different iterations of Trump's show over the years, wrote that not only had she witnessed Trump use an ethnic slur for Filipinos during her time as a White House aide, she'd been informed by three separate sources about Trump using the extremely offensive slur against African Americans on the TV show set during a "classic Trump-goes-nuclear rant," Sputnik reported.

"I remember this tape I saw, and I described it exactly. He says the N-word, he calls [his son] Eric [Trump] the R-word. Now they call it the N-word tape," Arnold said. "I have friends that worked on that show, and I explained it exactly."

Arnold then put on his own investigative journalist's cap and went to work trying to hunt down the tapes. The odyssey led to Arnold's own TV show, "The Hunt for the Trump Tapes With Tom Arnold," which premiers on Viceland Tuesday.

It also led to a fist fight with "The Apprentice" producer Mark Burnett Sunday night at an Emmy's pregame party.

Arnold had been goading Burnett for months to hand over the tapes, telling TCA in July, "I'm going to keep hammering Burnett until he shows" them.

Mark Burnett just went apeshit & choked me at this huge Emmy party then he ran away with his torn Pink shirt & missing gold chain. I’m waiting for LAPD

​It's not actually clear that the tapes in question contain the incidents in question. Arnold was reportedly asked by another partygoer if he had any tapes at all from "The Apprentice" with Trump on them, to which he answered in the affirmative and noted he'd given them all to Farrow, Deadline reported. That's when Burnett allegedly threw hands.

The eight-part series of Arnold's show follows the actor on his quest to prove that Trump's "the same kind of old-school dumb ass as I am," and therefore unfit to be president, Arnold told the Los Angeles Times Monday.

Other Trump tapes Arnold is on the hunt for include the perhaps even more infamous "pee tape," which is referenced in the the dossier compiled on Trump by former MI6 agent Christopher Steele, at the behest of the Democratic National Committee, which allegedly shows Russian sex workers urinating on a bed used by former US President Barack Obama while staying in a Moscow hotel.

We'd offer to tell him that most of the dossier's contents, including the "pee tape," are probably made up by Ukrainian researchers hired to cook up salacious stories "of the top of [their] head," as Sputnik previously reported, but that might spoil the fun.