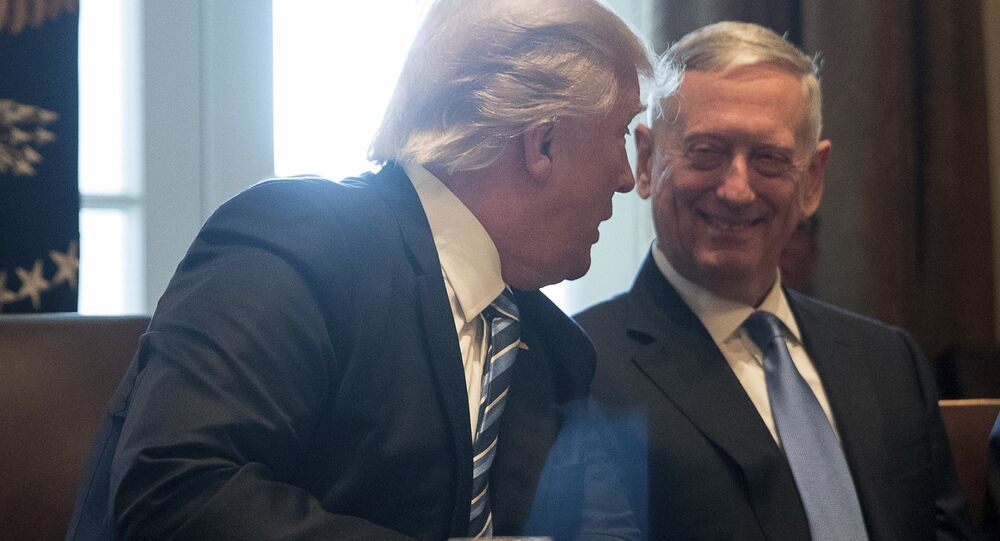 'I Love It Here': Mattis Dismisses Rumors of Impending Departure From Pentagon

Earlier, US media reported, citing unnamed sources, that President Trump was mulling replacing the Pentagon chief with someone more openly supportive of his foreign and defense policies following the midterm election.

Secretary of Defense James Mattis has played down rumors that he may leave his post. "I wouldn't take it seriously at all," he said, speaking to reporters outside the Pentagon on Tuesday.

"It's like most of those kinds of things in this town. Somebody cooks up a headline, they then call to a normally chatty class of people, they find a couple of other things to put in, they add the rumor, somebody on the other coast starts writing the same thing, next thing you know you've got a story," the secretary said.

"How many times have we been through this, now, just since I've been here?" he asked. "It will die down soon, and the people who started the rumor will be allowed to write the next rumor, too," he said. "Just the way the town is. Keep a sense of humor about it, ok?"

"Of course I don't think about leaving, I love it here," Mattis added, when asked if he himself was thinking about resigning. "I'm thinking about retiring right here, getting a little place down on the Potomac," he added.

Mattis responds to reports his time at the DoD is short: You shouldn't take the reports seriously.

Adds how the "rumor" is spread by the news.

"Of course I don't think about leaving, I love it here. I'm thinking about retiring here, getting a little place down on the Potomac." pic.twitter.com/vNZxRvajXN

Mattis's remarks were a response to The New York Times reporting over the weekend that the Trump administration would start preparing for the 2020 election cycle immediately after the midterms in November, with this requiring that members of the administration more closely share Trump's views.

© AFP 2021 / Mohamed al-Bakour
See No Evil: Mattis Claims US Has 'Zero Intelligence' on Syrian Militants' Chemical Weapons
The relationship between Trump and Mattis has been the subject of rumors amid reported disagreements on NATO policy, assessments on the effectiveness of the US decision to withdraw from the Iran nuclear deal, and its Syria policy.

The release of journalist Bob Woodward's book on the Trump administration earlier this month has been rumored to have further strained the relationship. In the book, whose contents Mattis has publicly dismissed, the secretary of defense is quoted as saying that Trump has the mindset of "a fifth or sixth-grader" on Korea policy. In a separate section, Mattis reportedly said that Trump had commanded him to "f***ing kill" Syrian President Bashar Assad in 2017, with the Pentagon rejecting the idea and putting together a "much more measured" response instead.

Mattis called the book a "product of rich imagination" and said that "the contemptuous words about the president attributed to me in Woodward's book were never uttered by me or in my presence." Woodward challenged Mattis's denial, accusing him of "not telling the truth" and suggesting that administration officials were simply trying to protect their jobs.