An internal review report on Officer Kevin Brown, who used a stun gun on an 11-year-old girl in early August for shoplifting, revealed on Tuesday that the cop violated several Cincinnati Police Department policies.

The incident between Brown and minor Donesha Gowdy took place on August 6 at roughly 9:30 p.m. local time at a Kroger grocery store in Cincinnati, Ohio. Brown, who was working a part-time job as a security officer at the establishment, deployed his stun gun on Gowdy, whom he suspected of shoplifting, after she failed to comply with his orders.

Gowdy was with two other girls at the time of the incident; however, they managed to evade capture as Brown focused his attention on Gowdy. A statement released by the police department days after the incident said that after being struck with the stun gun prongs, Gowdy was placed in custody and later taken to a local hospital for treatment. Prongs were found on Gowdy's back and wrist.

© AP Photo / Roy Dabner
‘You Need to Get Off the Police Force': Ohio Police Investigating Officer Who Used Stun Gun on 11-Year-Old

The minor was subsequently released to her family after being cleared by medical personnel. Although she was charged with theft and obstructing official business, those charges were later dropped, Cincinnati news station WLWT 5 reported.

The Cincinnati Police Department launched an investigation into Brown's actions the day after the incident. Brown was placed on restricted duty pending the investigation.

According to the internal review report, Brown committed prejudice by making comments regarding Gowdy's race, failed to activate his body camera ahead of the scuffle even though he had adequate time to do so and failed to warn Gowdy that he was going to deploy his weapon. The report also indicates that Brown failed to properly judge the situation, as they deemed his use of the stun gun at all unnecessary.

Attached to the review report were recordings obtained from Brown's body-worn police camera that detail conversations between Gowdy and the officer after he deployed his weapon.

​"The last thing I want to do, sweetheart, is tase you like that," Brown is heard telling Gowdy. "When I say stop, you stop. You know [you're] caught; just stop."

"That hurt my heart to do that to you. Then I got to listen to all these idiots out here in the parking lot telling me how I was wrong for tasing you. You broke the law and fled as I tried to apprehend you," he adds.

In another moment, Brown tells Gowdy that the behavior she exhibited in the store was the reason why stores were closing down in the Cincinnati area. "You know what, sweetheart, this is why there's no grocery stores in the black community, because of all this going on," he said.

Brown, in an interview with investigators, later defended his remarks on store closings, telling officials that his statement was not biased and is supported by statistics, according to the report. The 55-year-old officer also admitted to authorities that Gowdy did not pose any threat to him or others around him. 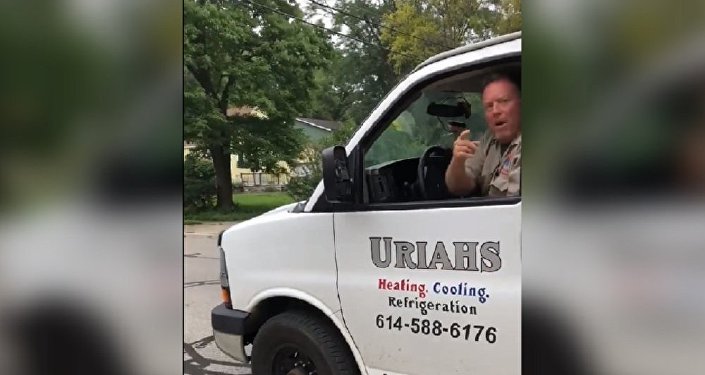 This is not the first time that Brown has been found to have made an inappropriate comment while working in an official capacity, the Cincinnati Enquirer reported. In 2016, the officer was written up for using a homophobic slur against a victim of domestic violence. It was noted that the woman did not hear Brown's remarks.

"I just don't know if you have room on the police department for people like this," Cincinnati councilman Wendell Young told the Enquirer. "This guy, from what I am hearing, has serious issues. He apparently polices the way he feels."

"If it's true he tased the little girl, if it's true that he said what he's reported to say, if it's also true that not terribly long ago he made derogatory comments about the gay community, he's building a case that makes it difficult for us to continue with him as a member of the police department," he added.

For Cincinnati Police Union President Dan Hils, Brown's remarks were more about him trying to paint a general picture of the theft problem to Gowdy. "I think the officer was trying to express to this juvenile suspect that there are consequences, not only to herself, but to others when you don't respect the property rights of another," Hils said.

Aside from Brown's commentary, the officer's actions have also sparked calls for the police department to change their policies on use of force. Presently, the department's manual states that stun guns can be used on suspects aged seven to 70 who are actively resisting arrest, which is described as "bracing, tensing, pushing or verbally signaling an intention to avoid or prevent being taken into or retained in custody."

Brown is now expected to face a pre-disciplinary hearing.