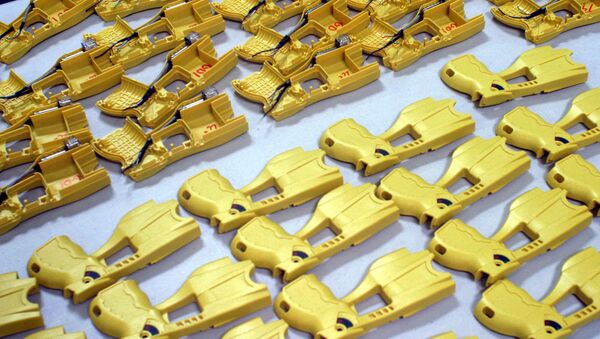 © AP Photo / Roy Dabner
Subscribe
Ohio's Cincinnati Police Department launched an investigation Tuesday into one of their officers for his decision to use his taser stun gun on an 11-year-old who was suspected of shoplifting at a grocery store earlier this week.

The incident took place on Monday at roughly 9:30 p.m. local time at a Kroger grocery store in Cincinnati. According to officials, the unidentified officer deployed his taser on the suspected shoplifter's back after she failed to comply with his orders and walked away from him. The off-duty officer had been working as a security guard at the establishment.

A media release from the Cincinnati Police Department states that the pre-teen was with a group of juveniles who had allegedly been using the five-finger discount to snag undisclosed items from the store.

After being shocked with the taser, the fifth grader was transported to Cincinnati Children's Hospital and later released to a guardian. She was subsequently charged with theft and obstruction of justice.

A day after the incident, Police Chief Eliot K. Isaac declared that his department would be launching an investigation into the matter and would be reviewing department policies on use of force.

"We are extremely concerned when force is used by one of our officers on a child of this age," Isaac said in a statement. "As a result, we will be taking a very thorough review of our policies as it relates to using force on juveniles as well as the propriety of the officer's actions."

The officer has been placed on restricted duty pending an investigation.

According to the Cincinnati Enquirer, the department's manual on the use of force indicates that tasers can be used on those aged between seven and 70 who are actively resisting arrest, which can include attempting to flee the scene. The 29-page section goes on to state that other behaviors that fall in line with resisting arrest include "bracing, tensing, pushing or verbally signaling an intention to avoid or prevent being taken into or retained in custody."

"An individual simply fleeing from an officer, absent additional justification, does not warrant the use of the TASER," the manual states. "The TASER may be deployed on a suspect actively resisting arrest when there is probable cause to arrest the suspect."

Policies aside, the Enquirer noted that the decision is ultimately left up to the officer, as they must determine whether deploying their taser matches the severity of the crime, the level of suspicion with respect to the fleeing suspect, the risk the taser could pose to bystanders, and potential secondary injuries that could arise.

Gowdy, aided by the efforts of Cincinnati Vice Mayor Christopher Smitherman, is calling on the department to change its policies. "I don't want it to happen to nobody else's kids, because it could've been worse. It could've been a gun," she told WCPO.

This is the second incident this year that involved an officer deploying their taser on a minor. Similar to the 11-year-old's case, a minor was fleeing from an officer in Ohio's Clifton Heights in April when the officer discharged their taser. However, unlike this week's incident, the boy was only hit with one prong, making the shock ineffective, according to the Enquirer.