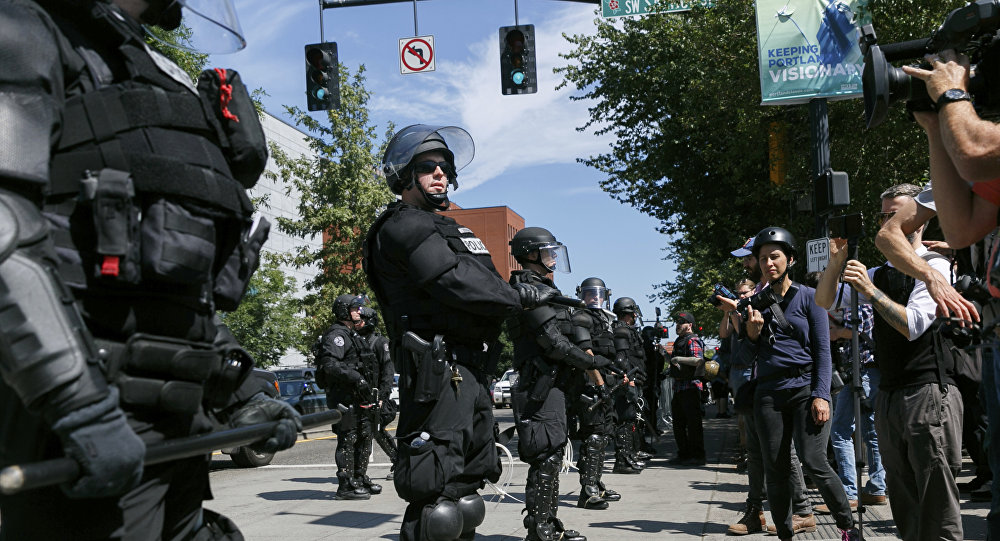 Danielle Outlaw, the police chief in Portland, Oregon, told local right-wing radio host Lars Larson her cops had “come with the intention to fight,” “kicked butt” and used other schoolyard analogies to describe the force Portland police officers deployed ‒ and have been much criticized for ‒ during demonstrations August 4.

Outlaw has been under fire since her officers used a variety of "nonlethal force" measures on left-wing counter-demonstrators to the far-right August 4 rally. Critics are saying her officers used excessive force and clearly targeted one side.

Three people were hospitalized because of the police department's crowd control choices: one with a traumatic brain injury and others with third degree chemical burns and open wounds, Sputnik News previously reported.

Outlaw described the scene to Larson as a schoolyard fight. "I tell you, 'Meet me after school at 3:00. Right? We're gonna fight. Right?'" she said. "And I come with the intention to fight. And then you get mad because I kicked your butt. And then you go back and you wail off and whine and complain because you thought when you left that you were going to come and be the victor."

Critics have singled out the incident in which police officers appeared to use force on a crowd of left-wing demonstrators simply to get back to two of their vehicles.

In a video by independent journalist Daniel V., it appears as though the police were trying to get to unattended squad cars.

A few moments later, an officer tells the people at the edge of the crowd to move before police started deploying weapons. 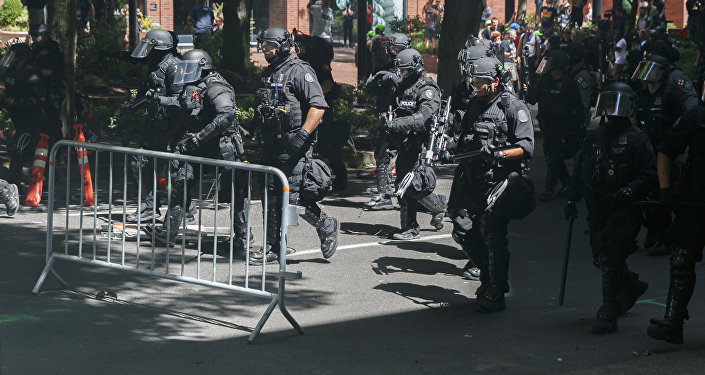 Videos taken at the rally show officers charging a crowd and firing pepper spray grenades, what appear to be sting-ball grenades and 40mm direct impact rounds.

Olivia Katbi Smith, co-chair of the Portland branch of Democratic Socialists of America, told Sputnik News that the police response was against a peaceful protest.The police department claimed they cracked down on the demonstration after objects were thrown.

It's been widely reported that police used flash bang grenades, but they appear to actually be sting-ball grenades, which emit a bright light and shoot out rubber bullets when they are deployed and are supposed to be fired by officers at an angle of 15 degrees over the crowd, Ryan Lee of PPB's Operations Branch, told reporters after the rally. But a protester who was at the scene wrote to Sputnik News that an officer "was shooting them AT protesters."

One protester had his helmet penetrated by a grenade, leaving him with brain trauma.

"It was terrifying. Just the sounds of flash grenades — and that many, going off in a row — it sounds like a warzone. It's terrifying," Katbi Smith told Sputnik.

Shortly after the protest and amid heavy scrutiny of the violent police response to the counter-demonstrators and not towards the far-right ralliers, Outlaw announced that the department would conduct an investigation into the matter. "We hold ourselves accountable," she said on the radio show.