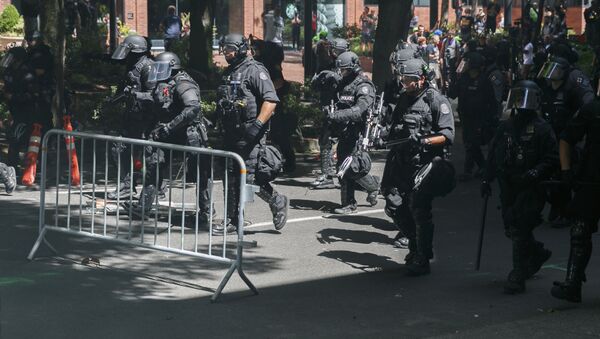 Portland Police Chief Danielle Outlaw and Mayor Ted Wheeler continue to be scrutinized over the police handling of a far right demonstration and left wing counter protest over the weekend.

Civil rights and activist groups have accused the police of repressive tactics handed down disparately against anti-fascist protesters, Sputnik News reported Monday after Outlaw vowed to investigate whether proper procedures were followed.

The far right groups Patriot Prayer and Proud Boys, the latter of which is a hate group according to the Southern Poverty Law Center, drew a crowd of between 400 and 500, while there were more than 1,000 counter-demonstrators, Olivia Katbi Smith, co-chair of the Portland chapter of the Democratic Socialists of America (DSA), told Sputnik News.

"While it has been widely reported that police used flash bang grenades, photographs appear to show sting-ball grenades, not flash bangs — which are more frequently used by police during demonstrations," Sputnik News reported. "Sting-balls emit a burst of white light similar to a flash bang, but also shoot out rubber bullets into the radius surrounding their burst."

Those rounds are supposed to be fired by officers at 15 degrees over the crowd, Ryan Lee of PPB's Operations Branch, told reporters Friday. However, another protester who was at the scene wrote to Sputnik News that an officer "was shooting them AT protesters."

"It was terrifying. Just the sounds of flash grenades — and that many, going off in a row — it sounds like a warzone. It's terrifying," Katbi Smith said. She told Sputnik News that all of that came in response to a peaceful demonstration.

But the nonviolent nature of the demonstration was disputed by PPB, who said that the police responded to violence by the left wing demonstrators with so-called less-than-lethal munitions. "Unfortunately, today, some people chose to commit illegal acts of violence, which required members of the Police Bureau to take action in order to keep all participants and non-participants safe," PPB said in a statement after the protest.

In video from the protests, police can be heard on loudspeakers accusing protesters of throwing rocks, Sputnik News reported.

Some moments later, a cop tells protesters on the front lines that "if you guys don't move, you're going to get hit," before rounds start popping off.

It's the second video posted online that shows the moment police moved in. The first was published by independent media collective Unicorn Riot, which tweeted that PPB "unloaded munitions, apparently unprovoked."

The disparate policing and evidently unprovoked attack on demonstrators aren't the only things raising journalists' eyebrows. PPB spokesman Christopher Burley sent photographs to reporters on Saturday of some of the weapons police had confiscated at the protest, including a shield with a Confederate flag on it.

On Sunday, he said that left wing demonstrators may have planted weapons adorned with Confederate and racist imagery in order to make Patriot Prayer look bad, but offered no evidence to support the claim, according to the Portland Mercury newspaper.

"I've got video of police taking that shield with the confederate flag on it from the Patriot Prayer group," Portland-based independent reporter Mike Bivins tweeted in response, offering video.

Other videos show an excess of pro-Confederate imagery at the demonstration.