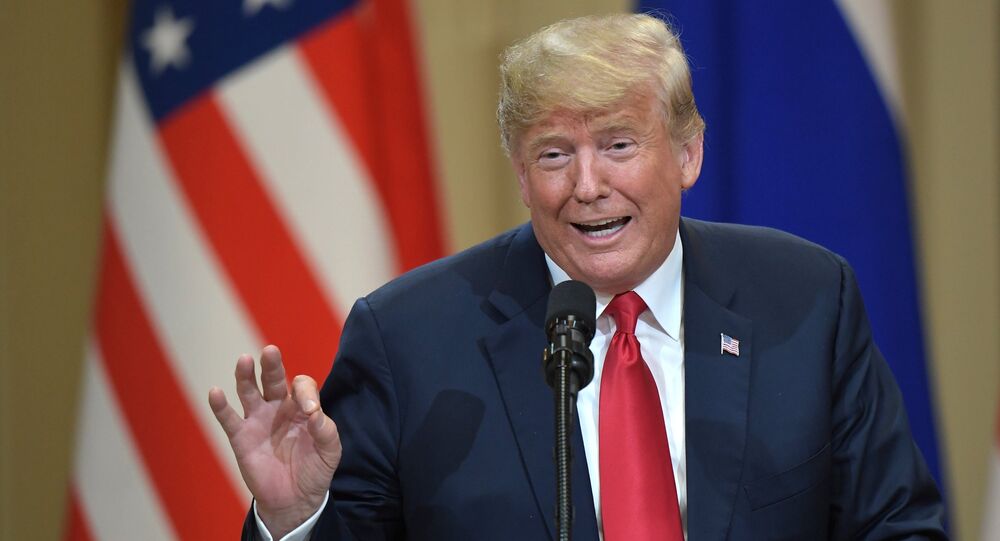 President Donald Trump has been facing a massive backlash over his first large-scale summit with Russian President Vladimir Putin in Helsinki, which they both declared productive and successful. Some senators, however, have blasted POTUS for “missing an opportunity” to hold Moscow accountable for allegedly meddling in the 2016 election.

According to AP, Vice President Mike Pence, National Security Adviser John Bolton and Chief of Staff John Kelly gathered Tuesday to convince President Trump to backtrack on his comments on the US intelligence assessment of Russia’s alleged meddling in the 2016 election during the joint press conference with Putin.

The report comes a week after one-on-one discussions between Putin and Trump, followed by a joint press conference, where the US president somewhat hinted that he believed that Moscow had nothing to do with the alleged meddling.

© Sputnik / Maksim Bogodvid
Huntsman Reportedly Refuses to Resign Amid Calls to Quit Over Helsinki Summit
The Washington Post reported that President Trump allegedly complained that an AP reporter’s question about Russia’s meddling was too difficult, and wondered why it was Jonathan Lemire rather than someone else who would have approached him with an easier query.

During the joint presser, POTUS once again stated that there had been no collusion between him and Putin, as they didn’t know each other prior to the election. He further revealed that Putin offered to allow US agents to travel to Russia and observe the questioning of the 12 suspects Department of Justice Special Counsel Robert Mueller had indicted days before the historic meeting.

AP suggested that Trump’s top aides told him that Defense Secretary Jim Mattis and Secretary of State Mike Pompeo were increasingly alarmed at his words and that plenty of congressional representatives as well as his supporters believed the public praise of Putin was way over the line.

Just a day after the summit, Trump walked back his support of Putin’s denial of Russian interference in US election, claiming he had misspoken during the press conference and accepted US intelligence reports that Moscow allegedly sought to influence the outcome of the vote.

“The sentence should have been: I don’t see any reason why I wouldn’t – or why it wouldn’t be Russia,” the president clarified Tuesday, claiming he’d used a confusing “double negative.”

In an interview with CBS News, which aired Wednesday, Trump claimed that he held the Russian president personally accountable for Moscow’s alleged interference.

The Trump administration has on multiple occasions denied any collusion with the Kremlin during the election campaign, with President Trump branding the allegations a “witch hunt.” Moscow, for its part, has also dismissed the accusations of its meddling in the 2016 vote as “groundless.”