Just when you thought it couldn’t get any worse, the discourse on US-Russia relations reached new lows in the wake of US President Donald Trump and Russian President Vladimir Putin’s meeting in Helsinki, Finland, political analysts have suggested.

"According to the latest tracking poll, 79 percent of Republicans highly approve of [Trump's] performance in Helsinki with President Putin, and 91 percent of Democrats highly disapprove," Rall told Loud & Clear host John Kiriakou and Walter Smolarek, who is filling in for Brian Becker. "It's an incredible split. But Trump's strategy from day one, and it's what has gotten him the Republican nomination and elected president, has been to cater to his base, and he has not deviated from that one bit."

"I don't think the invitation to Putin to come to the White House is going to affect that base. I think he literally can just shoot someone on Fifth Avenue, and it'd be just fine for them," Rall added.

Sleboda called Trump's handling of relations with Russia since the summit "embarrassing."

"It shows the wide gulf between Trump and much of his own administration. I saw some of those videos where Trump retracts his ‘woulds' to ‘wouldn'ts'; it felt to me like watching a hostage video. You could practically see someone with a gun, albeit a political one, behind his head, saying, ‘This is what you're supposed to read.'"

"I don't think anyone believes his retractions, and he's constantly waffled on the side of not [believing], I think with good reason, US intelligence on many of the details of this whole hacking and influence, this projectionist story of Russia meddling in US elections rather than, say, the other way around," Sleboda said.

But Trump isn't the only one who should be embarrassed, according to the Loud & Clear guests. Rall said it's "particularly strange to see Democrats, who traditionally have been skeptical" of intelligence agencies, now taking them at their word. 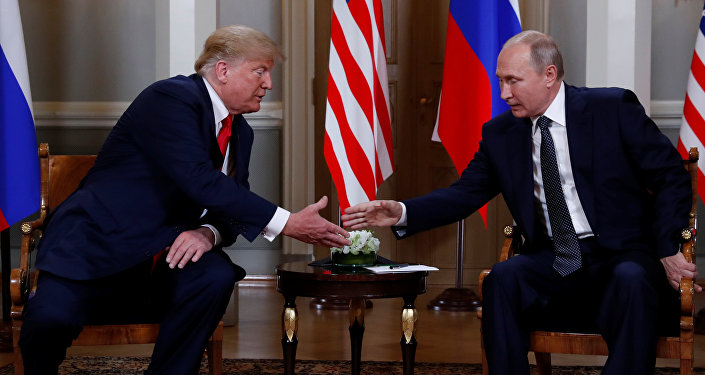 "I think anyone with half a thought in their mind can see how bizarre it is. And then meanwhile, you have Republicans, who traditionally have always been the guardians of these kind of state police forces, expressing skepticism of these results," Rall said. "I mean, that's very welcome. I would have like to have seen the same skepticism during the buildup to the Iraq war."

Special Counsel Robert Mueller, who leads the Trump-Russia collusion investigation, pushed the line that Iraq had weapons of mass destruction while he was FBI Director.

Since the alleged hack of the DNC, "the CIA and the FBI have become what the cops and the firefighters were after 9/11. They're sainted heroes; they can do no wrong," Rall said.