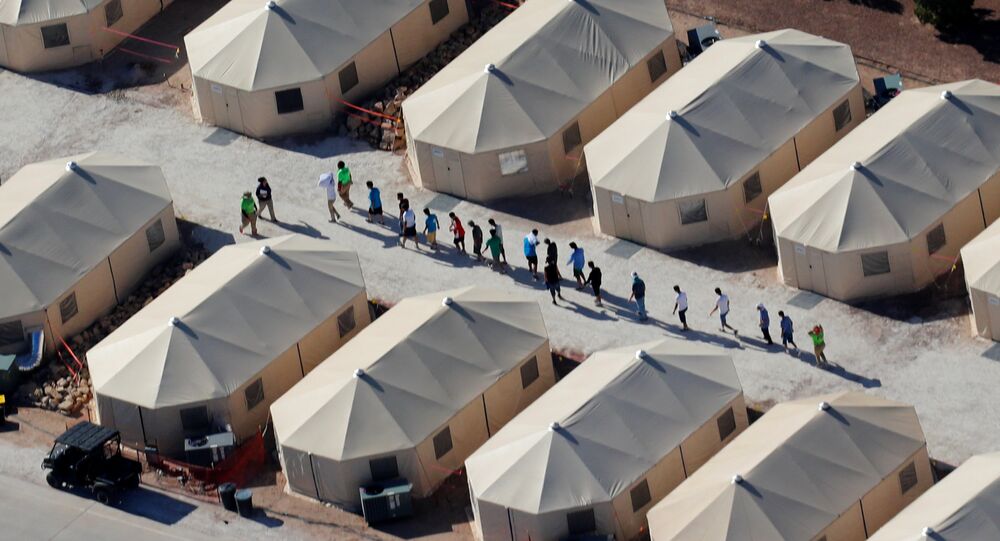 MOSCOW (Sputnik) - Unaccompanied migrant children held at Shiloh Treatment Center in Texas were allegedly given a variety of psychotropic drugs, which could have harsh consequences for their health, according to a lawsuit filed on behalf of some of the adolescents and their parents.

One of the testimonies attached to the lawsuit filed in April by Center for Human Rights and Constitutional Law include mentions of staff at Shiloh acting violently toward children to provoke aggression.

© AFP 2020 / Yuri Cortez
Trump Signs Executive Order on Immigration Amid Fierce Political Backlash
Another person held in Shiloh was being given two types of medication. They were told at some point that they could not be released to reunify with a relative living in the United States over being "aggressive."

According to the lawsuit, other testimonies point to children receiving various psychotropic drugs at the same time, with little or no information about these medications. Psychotropic drugs may have serious side effects and, under normal circumstances, require careful supervision of a licensed medical specialist informed of the patient's health issues.

Shiloh is only one of the government contractors paid to house unaccompanied migrant minors, and, according to media reports, the mistreatment exists in other centers similar to this one.

© AFP 2020 / Guillermo Arias
US Immigration Are Laws Weakest and Worst in the World - Trump on Twitter
The lawsuit comes shortly after US President Donald Trump signed a decree ending the policy of separating migrant families at US border, placing adults into detention centers, away from their children.

In the last few days, the family separation policy has met with a barrage of criticism from numerous politicians and other prominent figures in the United States and abroad.

In April, Attorney General Jeff Sessions announced a new zero-tolerance policy for anyone who crossed the US border illegally, which would mean placing adults in detention and sending children to the Department of Health and Human Services. However, Trump's decree does not appear to put an end to the zero-tolerance policy. Instead, it calls on various US agencies to prepare facilities for migrant families.