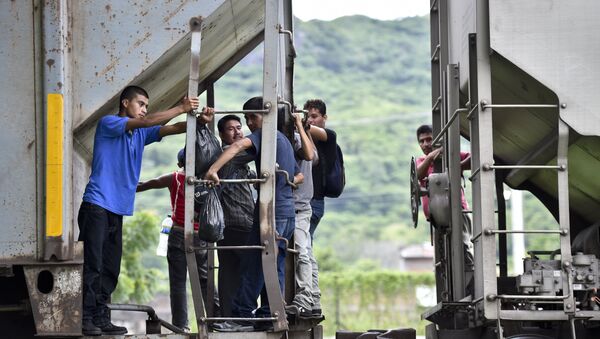 WASHINGTON (Sputnik) - US President Donald Trump signed an executive order that he said is designed to prevent the separation of children from their parents who illegally cross the US-Mexico border after facing fierce criticism from across the entire political spectrum.

Trump made the decision after media and rights groups shined on a light on conditions that children were being held under as a result of the administration’s "zero tolerance" policy. Almost 2,000 immigrant children were forcibly separated from their parents between April 19 and May 31 following arrests involving illegal entry into the United States, according to the Department of Homeland Security (DHS).

"We're gonna have strong, very strong borders, but we're gonna keep the families together," Trump told reporters at the White House. Trump added that he did not like the "sight or feeling" of families being separated.

The Trump administration came under intense criticism for its "zero-tolerance" policy after recent images from a detention center in Texas showed children locked up in cages.

Amnesty International Slams US Family Separation Policy as 'Torture'
Recent US media reports showed images of children crying as their parents were being apprehended by US Customs and Border Patrol agents. Other images showed children locked up in cages in warehouses.

An audio recording was also leaked of immigrant children crying and begging for their parents as they are mocked by what are believed to be immigration enforcement officials.

Aside from Congressional Democrats, the Trump administration was facing major opposition from Republican lawmakers over its immigration policy. The administration’s policy threatened lawmakers seeking reelection in the upcoming midterm elections in November.

Earlier on Wednesday, American, United and Frontier airlines announced that they would no longer transport immigrant children who have been separated from their families.

"Based on our serious concerns about this policy and how it's in deep conflict with our company's values, we have contacted federal officials to inform them that they should not transport immigrant children on United aircraft who have been separated from their parents," United Airlines said in a statement.

Watchdog Slams US Migration Policy as 'State-Sponsored Trauma'
During the course of the week, governors of the US states of Colorado, Maryland, Rhode Island and New York ordered their state assets such as National Guard personnel or equipment be refrained from being used to support the Trump administration’s mission to secure the US-Mexico border.

The text of the executive order said the Trump administration would continue its policy of "rigorously" enforcing immigration laws, but would "maintain family unity, including by detaining alien families together where appropriate and consistent with law and available resources."

However, the effort to keep families united would be accomplished in a way that does not seem like a humane solution. Trump’s order directs Attorney General Jeff Sessions to seek changes in what is referred to as the "Flores" settlement agreement in order to detain children longer.

The 9th Circuit federal court ruled that under the agreement the United States cannot hold immigrant children for more than 20 days even if they are with their parents.

Trump Signs Executive Order on Immigration to End Separation of Parents and Kids
The DHS will maintain custody of alien families during the pendency of any criminal improper entry or immigration proceedings involving their family members.

The order also asks Secretary of Defense James Mattis to make available any existing military facilities for the housing and care of immigrant families.

In addition, the order blames Congress and court decisions made in the past for putting the Trump administration in a position where it had to separate families in order to effectively enforce the law.

Trump’s order is already facing stiff resistance from lawmakers and may face an uphill court battle. Meanwhile, Trump administration officials themselves have conceded the law will not address the immediate problems.

Second Vice President of the American Immigration Lawyers Association Allen Orr told Sputnik that Trump’s order is problematic because it would require the detention of children for more than 20 days, something that was settled under the Flores agreement.

Trump's Immigration Order May Face Court Battle - Lawyers Association
The immigration lawyer was referring to Trump’s bid to impose a travel ban on immigrants from five Muslim countries in addition to Venezuela and North Korea. The case has gone through a prolonged and fierce legal battle all the way up to the Supreme Court.

US Health and Human Services spokesperson Kenneth Wolfe said in a statement later on Wednesday that migrant families already detained for illegal entry into the United States will not be immediately reunited with their families as directed in Trump's executive order. In other words, existing cases will not be "grandfathered in" to be covered under the new order, the official said.

House Minority Leader Nancy Pelosi said in a statement on Wednesday that the president’s executive order to stop the separation of families continues to abuse immigrant families by placing them in long-term incarceration.

"[Trump’s] executive order seeks to replace one form of child abuse with another," Pelosi said. "Every child is entitled to basic human rights. Instead, the President is paving the way for the long-term incarceration of families."

US Immigration Are Laws Weakest and Worst in the World - Trump on Twitter
Senator Bob Menendez underscored that administration will continue to implement its zero-tolerance policy. He called on the administration to end the policy and stop criminalizing asylum seekers.

Trump admitted himself that the "sight" of the children being caged was a big reason for his decision. Democratic lawmaker Ted Lieu saw it as a major victory for voters and activists.

"Trump retreats because his family separation policy was evil, and because of you," Lieu said in a Twitter post on Wednesday night. "Your outrage & activism beat @realDonaldTrump."