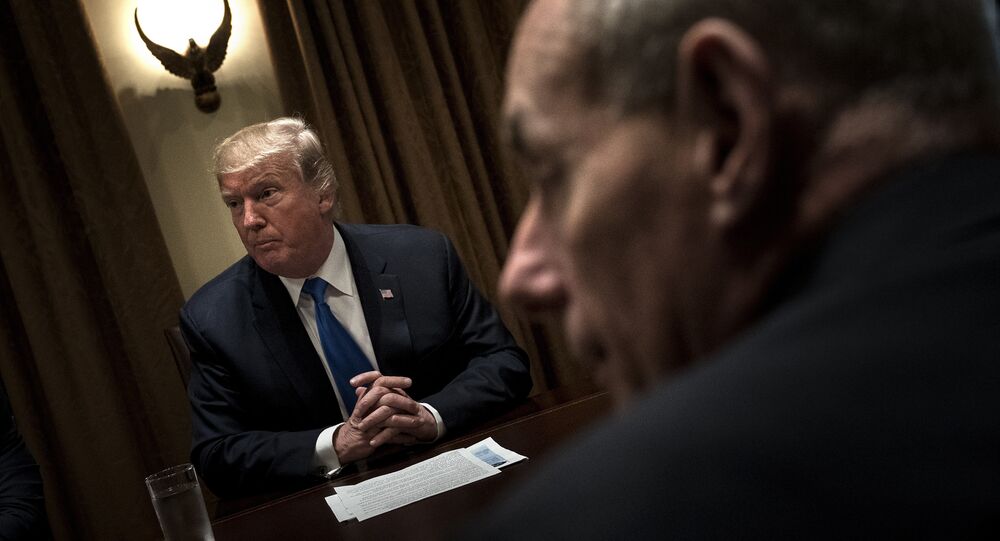 A top US government official stepped forward to refute allegations about derogatory remarks he reportedly made about the president of the United States.

White House chief of staff John Kelly has denied media speculations about him reportedly calling US President Donald Trump “an idiot,” describing these claims as “total BS,” according to The Guardian.

This development occurred after NBC News reported, citing four government officials, that Kelly had allegedly “referred to Trump as ‘an idiot’ multiple times to underscore his point.”

© AP Photo / 60 Minutes via AP
Tweet Justice? Stormy Daniels Sues Trump for Defamation Over ‘Con Job’ Crack
The chief of staff also allegedly called the president “an idiot” during a closed-door negotiation on the Deferred Action for Childhood Arrivals, claiming that Trump “doesn’t even understand” what this program actually is and thus needs to be saved “from himself.”

After Kelly himself refuted these allegations, NBC journalist Stephanie Ruhle, however, insisted on the veracity of the story.

Dear John Kelly-
As one of the people who worked on the story, I can tell you, it is WELL sourced.
As for “smearing” the President, those on your team recount stories of you (not us) undermining his credibility. https://t.co/oTHDyj1Fif

​She also pointed out that a similar incident occurred not long ago, when former Secretary of State Rex Tillerson allegedly described Trump as a “f*cking moron.”

​Tensions between Kelly and Trump were previously reported by the media on several occasions, with the former apparently threatening resignation and once even describing his position as "the hardest job he has ever had."

'Polite Refusal': Why the Trump-Merkel Talks Yielded No Breakthrough